Lake Biwa (琵琶湖) is the largest lake in Japan and is located in Shiga Prefecture. It's 8 mi / 13 km east of Kyoto (a city in Japan you've probably heard of) and isn't far from Mount Ibuki (if you're looking to do some hiking as well).

Riding a bicycle around the lake can be done in one (long) day, but it is more commonly completed as a two or three-day trip (if you're somewhat fit and willing to put in some effort, two days is completely realistic). 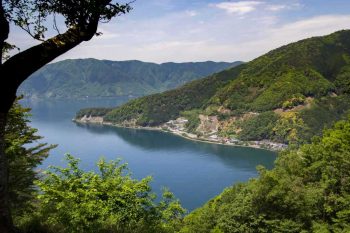 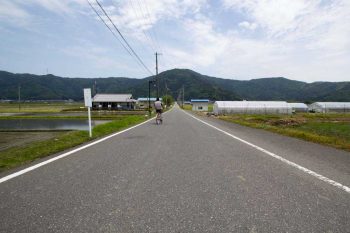 You can do the ride clockwise or counterclockwise (we did it clockwise) and you can begin/end the ride from wherever you like (there's no official starting/ending point).

Getting To Lake Biwa

The largest/closest city to Lake Biwa is Kyoto (京都).

Kyoto Station (京都駅) is only around 8 mi / 13 km west of the lake; you could conceivably start and end your ride from the city. On the western shore, the largest city is Takashima (高島市) and to the east, the largest city is Nagahama (長浜市). Technically, the largest cities around Lake Biwa are in the south, Kusatsu (草津市) and Otsu (大津市), but they're close enough to Kyoto that they're basically suburbs.

BY CAR: I drove to Lake Biwa for my ride around it and I ended up parking my car in a random shopping center near Nagahara Station (永原駅). When I returned to my car late the next day, there was a note informing me that I should not have parked there (not a citation or a fine, just a note).

BY TRAIN: There are train stations literally surrounding Lake Biwa, the northernmost station is Ōmi-Shiotsu Station (近江塩津駅) and the southernmost station is Ishiyama (石山駅). The stations along the western side of the lake are (generally) much closer to the actual lake than those on the eastern shore (where you'll also find larger towns).

BY BUS: Honestly, there are probably buses to get here as well, but just take the train like a normal Japanese person (that said, you might get yelled at if you have a bicycle that's not a folding bike in a case).

There's probably some official route around Lake Biwa, but the truth is that you will probably end up making your own route (particularly if you want to do some sightseeing along the way). The perimeter of the lake is approximately 146.1 mi / 235.2 km.

Obviously, if you consider yourself a serious cyclist (or are simply determined), this can be accomplished in a single day. That said, most people take two or three days to complete the trip. If you aren't riding into and out of Kyoto (or doing something similar), then you can cut off 22 mi / 35 km on the south side of Lake Biwa by taking the bridge connecting Moriyama (守山市) to Otsu (大津市).

The entire ride is ralatively flat unless you decide to stay true to the coastline along the Lake Biwa's northern side.

Here, you can either follow the shore, which will take you up and down some hills (it's beautiful, but I didn't enjoy it much with my single gear), or you can follow the main road and bypass the climbing. It's about 18 mi / 30 km via the shorline vs. 7.5 mi / 12 km via the main road.

A number of companies offer bike rentals (here's one the Google revealed), but it can cost as much as ￥9,500 (~$90 US) for a two-day rental. Honestly, you could buy a cheap bike for this price (and then just throw it into the lake when you're finished).

There's plenty to see surrounding Lake Biwa, but to be honest, I didn't find much of it to be particularly interesting. That said, if you're out on Lake Biwa to explore, then don't let me stop you. Here are a couple suggestions of places to check out:

Honestly, there is a lot that could be added to this list depending on what you're into (onsens, “beaches”, or beer), and it's probably best to just explore.

I would suggest making stops at Nagahama Castle (map) and Shirahige-jinja Shrine (map), but unless you're really into Japan's temples and statues, you won't be missing much if you don't go out of your way to see anything else.

You'll never be too far from a town during your circumnavigation of the Biwa Lake, and you've got a couple of different options if you're planning on doing the ride over more than a single day.

NOTE: my riding partner, Mr. Katz, had a terrible allergic reaction to something nearby to where we camped and was sneezing the entire night. Consider yourself warned (we did this ride in May).

My trip around Lake Biwa ended up being 97.5 mi / 157 km done over two days (we took the bridge and cut off the southernmost part of the ride).

We brought our own bikes via a car and began/ended the ride at Nagahara Station (永原駅). We stealth camped under a shelter we found along the lakeside (this is almost certainly not allowed – you've been warned).

Would I do this ride again? Probably. It was pretty fun and was a great way to explore Lake Biwa and the surrounding communities.