Mount Tsurugi (剱岳, Tsurugidake) is one of the many prize peaks of the Kita Alps (北アルプス), and is also one of Japan's 100 Famous Mountains.

The trailhead described here is a bit remote and if you don't have your own transportation, then you're out of luck unless you want to take an expensive taxi ride (¥8,000).

That being said, there are other routes to reach Tsurugidake – the most popular of which starts at Murodō Station (室堂駅) just below Tateyama (立山); you can hike to here or take the Tateyama Kurobe Alpine Route (立山黒部アルペンルート) to Murodō (English website). This is the more popular route; however, it requires more than one day to complete.

BY CAR: You can find the trailhead for Tsurugidake at Banbajima (馬場島荘) – at the end of a long and winding valley road. In addition to the Banbajima Inn, there is a free parking area, a bathroom, and a large grass field (in case you want to come the night before and camp).

BY TRAIN: You need to get yourself over to the Toyama Local Main Line (富山地方鉄道本線) and take a local train to Kamiichi Station (上市). Then you'll need to take a taxi (~45 minutes) that will run you somewhere close to ¥8,000.

Alternatively, if you opt to hike up via Tateyama instead of taking the route described here, you can take a train to Tateyama Station (立山駅) and either hike up from there or take the cable car and bus portion of the Tateyama Kurobe Alpine Route to Murodō.

The start of the hike lies through the small grass field next to the Banbajima parking lot. Fill up on water because there's none on the trail unless you want to buy expensive bottles from Hayatsukigoya (早月小屋), the lodge about two-thirds of the way up (open July 1 through mid-October; website here, Japanese only).

Mentally prepare for hours of uphill hiking, as the trail heads straight up the mountain and doesn't let up for pretty much the entirety of the hike (you are climbing a mountain, after all).

The hiking from here forward is a lot more enjoyable since you're mostly above the treeline and now (hopefully) have spectacular views of the Kita Alps and beyond.

Once reaching about 9,186 ft / 2,800 m you'll be climbing over rocks (and chains) the entire way to the summit. There's nothing too technical and doesn't require that you bring any special equipment, but there's a bit of climbing with your hands to be done. Rest assured that you will be given plenty of opportunities to fall off the mountain and plummet to your death.

The rocky summit of Tsurugidake is home to a small shrine and space for maybe a dozen hikers.

If you've followed the route described here, don't be surprised if you see a lot more people on the summit than you've seen all day – most of them will have climbed from Tsurugisawa Goya (剣沢小屋) via the Tateyama Kurobe Alpine Route.

On a clear day you'll have great views over to Hakusan (白山), Tateyama (立山), and the Kita Alps extending south – if you're lucky, you can spy Mount Fuji (富士山) as well.

From here you have a few options: 1) Descend via the way you came and back down to Banbajima, 2) Head north towards Mount Ikenodaira (池平山) and Mount Sennin (仙人山) to Keyakidaira (欅平) on the Kurobekyō-tetsudō line (黒部峡谷鉄道), or 3) Traverse south towards Murodō Station and Tateyama.

I opted for option three (which I would highly suggest if you've managed to get a ride to Banbajima) and was able to make it to the Murodō campground before nightfall (there's another campground a couple of hours before reaching this one, and the Kenzanso Lodge a couple of hours after leaving the summit of Tsurugi).

If you traverse to Tateyama, you can hike (or take the Alpine Route) down to Tateyama Station (立山駅) and catch a train from there.

The following was the route my GPS recorded on my hike up Tsurugidake (it also includes the traverse over to the Murodō campground).

I have no guarantee that this route is correct, nor that it can be accurately relied upon for backcountry navigation. It should serve only as a general guideline for what the trail is expected to look like.

I have also included my hike's elevation profile below (although it is incomplete due to some GPS troubles). 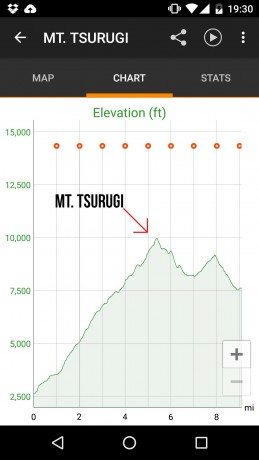 If you happen upon a mountain enthusiast during your time in Japan, then chances are Tsurugidake will be high on their list of revered peaks.

Whether you're making the huge climb up from Banbajima, heading in from the north, or traversing over from Tateyama, the 9,839 ft / 2,999 m summit of Tsurugidake is one of the most coveted prizes of Japan's Kita Alps (and is relatively unspoiled when compared to some of the surrounding peaks).

Have any questions about Tsurugidake? Want another post about another one of Japan's mountains? Have a suggestion to improve this information?