One of Japan’s hyaku-meizan, it’s a fairly well-known peak but is not nearly as popular a hike as some of the more prominent peaks in the area. That said, it’s easily accomplished in a day but there are also two huts on the north side where you can stay the night if you are so inclined.

There are four trailheads for Yakedake – one along Route 158 near Nakanoyu Onsen in Nagano Prefecture (just east of the border with Gifu Prefecture), one via the Shinhotaka Ropeway in Shinhotaka Onsen (新穂高温泉), one just south of Shinhotaka Ropeway, and one via Kamikochi (上高地) – a popular gateway to the Kita Alps accessible only via bus (no private cars allowed).

There are four trailheads for Yakedake, one at Kamikochi (上高地), one at Shinhotaka Onsen (新穂高温泉), one just south of Shinhotaka Onsen, and one on Route 158 near Nakanoyu Onsen (中の湯温).

BY CAR TO SHINHOTAKA ONSEN*

There is a free parking lot for hikers at the Ryokan Shinhotaka Okuhida (map). From here you will need to walk up the road, past the entrance to the ropeway, and then past the parking lot at the top of the hill to officially begin the hike (signage and maps provided at the lodge).

BY BUS TO SHINHOTAKA ONSEN*

From Takayama Station (高山駅) in Gifu (it’s a train station) take the bus bound for Shinhotaka Onsen (新穂高温泉) to the last stop. It takes about an hour and a half. The first bus departs Takayama Station at 7:00 in the morning.

If you’re farther north, you can also take a bus from Matsumoto Station (松本駅) in Nagano.

*The hike from Shinhotaka Onsen requires that you take the Shinhotaka Ropeway up and back from the trail. This saves a significant amount of elevation gain. For costs and hours, check here.

BY CAR TO SOUTH OF SHINHOTAKA ONSEN

If you don’t want to take the ropeway and would prefer to hike up from south of Shinhotaka Onsen, there is another trailhead on the way there, located at 36.257405, 137.574757. You can park here or walk from Shinhotaka Onsen (see directions for Shinhotaka Onsen above).

There are no private vehicles allowed on the road to Kamikochi, so you will have to take a bus in. To reach the Kamikochi bus terminal, you can either take a private vehicle or a number of different buses. Direct buses are available from Tokyo, Kyoto, Osaka, and Nagano. You can also take buses (with transfers) from Matsumoto and Takayama. For more on getting to Kamikochi, check out the official site here.

This is probably the least-popular route up Yakedake since it requires you to take the Shinhotaka Ropeway up to the ridgeline just south of Nishihotakadake (西穂高岳) – the peak most people hike from the ropeway. That said, it’s also the route with the smallest elevation change.

From Nishiho-sanso (西穂山荘), aka the Nishiho Hut, follow the signs (and ridge) south toward Yakedake. The trail is a bit overgrown as you’ll pass Warudaniyama (割谷山) on your way toward Yakedake-goya (焼岳小屋), aka Yakedake Hut.

At the hut, there is a toilet, lodging, and food and water available for purchase. From Yakedake Hut it’s 1 mi / 1.6 km of treeless hiking to the summit. You will pass some gas-spouting vents with sulfur-stained rocks and have a small bit of scrambling before reaching the summit.

I haven’t personally hiked this way, but there is an additional trailhead south of the Shinhotaka Ropeway (parking here). This trailhead is located at approximately 4,100 ft / 1,250 m and has the most elevation change of any of the four trailheads as you climb to the 8,054 ft / 2,455 m peak.

The trail via Kamikochi is perhaps the most popular route up to Yakedake. It begins just north of the Taisho-ike bus stop (or just southwest of the Kamikochi Imperial Hotel (上高地帝国ホテル). The trail gets progressively steeper until reaching Yakedake-goya (焼岳小屋) and then continuing up via the same route up the northern slopes of Yakedake.

For a straightforward hike up and down to the summit, this is your trailhead. The trail starts on what’s basically the side of the road and then climbs through some dense forest before breaking free of the shrub and continuing up the southern slopes of Yakedake to the summit.

There are no facilities and no water located along this route – you do not pass any mountain huts. Yakedake-goya (焼岳小屋), where you can find food and water for sale, is located approximately 1 mi / 1.6 km north of the summit (that’s an additional 1 mi / 1.6 km away from Route 158).

There’s a crater at the summit of Yakedake which means that you’re not hiking toward a traditional-looking peak and instead will find the summit marker located on the southeast portion of the crater rim (don’t worry, the trail goes directly to it).

In the crater there’s a small (probably poisonous) lake. You can scramble down a bit closer to it (and a sharp drop off), but there isn’t much in the way of trail leading anywhere else around the crater rim. The summit marker isn’t even at the highest point of the rim – very disappointing.

The following map shows the hike up to the summit of Yakedake from the trailhead at the top of Shinhotaka Ropeway and then down to the trailhead located on Route 158.

I have no guarantee that this route is correct, nor that it can be accurately relied upon for backcountry navigation. It should serve only as a general guideline for what the trail looks like.

Yakedake isn’t my favorite hike in the Kita Alps (北アルプス), but it’s one of the Nihon hyaku-meizan and it’s an active volcano. If you like to check boxes, this might be the hike for you.

Personally, I would recommend this hike via the Route 158 trailhead or as a loop via the two trailheads at Shinhotaka Onsen. That said, Kamikochi is the easiest place to reach if you’re only in Japan for a short time and want to be efficient with your mountain exploring.

Have questions about hiking Yakedake? Want another post about another one of Japan’s mountains? Have a suggestion to improve this information? Leave a comment and let me know! 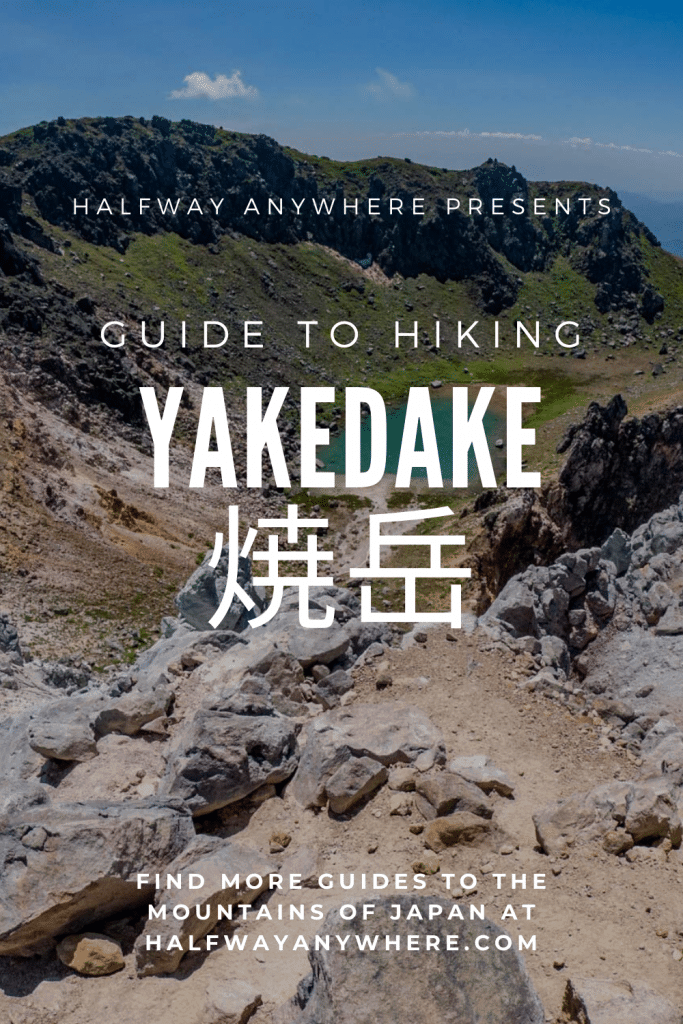