Two days of sun and then four of thunderstorms – the unanimous weather forecast for the greater Uluru area.

Unfortunately, I am on a bit of a budget as far as time goes (and am deathly afraid of being on a bicycle in the Outback in the middle of a thunderstorm).

Instead of spending four miserable days in the rain and missing what might be my only opportunity to see the mighty Uluru, I decide that I'm going to hitchhike the Uluru detour from Erldunda.

Despite the hitch, I will still be conquering the entirety of the Stuart Highway via bicycle – crossing the entire continent of Australia. I'm happy enough with that.

But that doesn't mean my bike isn't coming with me to the rock.

I've never hitched with a bicycle before, but given the fact that everyone here is driving either a caravan or a truck (spare the poor foreign backpackers such as myself), I don't think there should be much of a problem getting a lift.

After fifteen minutes, a pickup (or ute as they're called in the Land of Oz) stops and gives me a lift 35 miles (56.2 km) west to a small outpost with a gas station, an aboriginal art gallery, and a convenience store.

My driver bids farewell and heads north into a cloud of red dust to drop off a generator at a cattle station somewhere even deeper into this martian landscape.

I had initially thought that the caravan drivers (Grey Nomads) would be the most willing to give me a lift. They've got so much room in those things!

But I guess a lot of them have a thing about letting strangers into what literally amounts to their home.

On that note, it is worth mentioning that a solid 60% of the people I talk to about hitchhiking in Australia bring up the movie Wolf Creek. 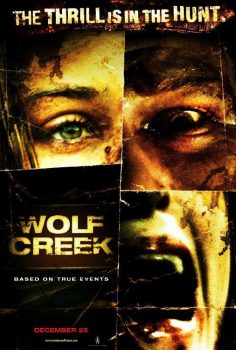 The film is based loosely on the serial killings of a scumbag named Ivan Milat. Most of his victims were foreign backpackers, some of who were hitchhiking when last seen.

My theory? Since most Australians' only connection with/context for hitchhiking is this movie, they are actually just trying to make friendly conversation. Either that or nobody here is capable of thinking before mouth opening.

Regardless, I now have to see this movie (apparently everyone in Australia has). But perhaps it would be best to finish my current bicycle tour before filling my head with any more nightmarish images or ideas.

They even made a sequel. And I believe are making a threequel. Want to know the tagline? Great, I'll tell you. It's, “Mick Taylor is back for a third time to brutally murder Outback tourists.”

Direct and to the point. Sounds like a great way to inspire foreign visitors to explore the continent.

Thankfully, instead of being picked up by a murderous madman, I am picked up by Jeff, the local Coca-Cola sales rep. After disassembling my bike, I squeeze the pieces into his drink-filled trunk and we set off in his time machine (cars are really fast).

Jeff stops off at a lookout where we can see Mount Conner – a 2,818 ft (859 m) flat-topped mountain commonly confused with Uluru.

Apparently, Mount Conner is located on private property (someone owns this thing?) and is not accessible without an invitation (they must have some crazy parties up there).

When I arrive in Yulara (the small community about 12 mi /20 km north of Uluru), Jeff gives me a healthy helping of free product and even offers to give me a lift back to Erldunda in two days (where I began my trip this morning).

I may have to take him up on this offer.

Despite it being in quite literally the middle of nowhere, Yulara has more services than anywhere I've passed since Coober Pedy.

There are hotels, a market, a gas station, a campground, an RV park, more aboriginal art galleries, and even a small shopping center – it's basically paradise.

I get myself checked in at the hostel (which is actually just a shared 20 person room at the hotel) and make friends with a group of Japanese tourists, bonding over the fact that we all have bug nets (I'm not kidding, these flies are no joke).

Tomorrow, it's off to the rock.