After successfully navigating my way through Sweden on the thumb, I have mustered up the confidence to try my luck hitching in a place where the English is not as widely spoken.

It is time to venture into Germany and towards my newly acquired destination: Berlin.

I am currently in the city of Maastricht, just over six hour's drive from Berlin, but since I do not know how far I will be able to make it each day (and since camping will not be as viable an option as it was in Sweden), I have selected the cities of Dortmund and Hanover as waypoints on my journey east. 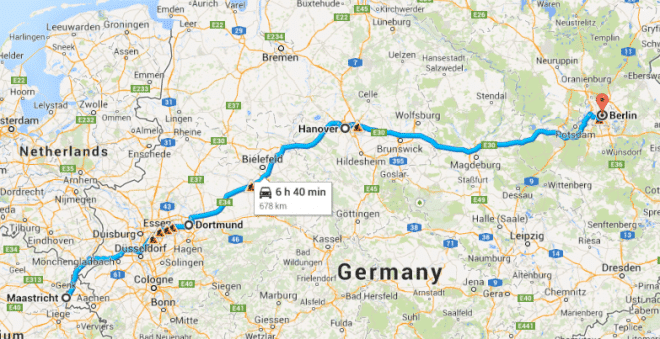 Why Dortmund and Hanover? Because this splits up the trip into three segments with an average segment length of approximately 230 km (140 mi) – a distance I am confident of being able to hitch in one day.

Normally I would not be concerned with keeping such a tight schedule, but I plan on Couchsurfing, and as a courtesy to my hosts I want to be able to ensure my arrival within a reasonable window of time.

But first, I need to get out of Maastricht.

As you may have noticed (but probably did not), this adventure begins in the Netherlands, in the city of Maastricht.

I begin my journey in the south of the city, at the freeway on-ramp nearest to my friend's apartment (because I am lazy).

Unfortunately, Maastricht is currently in the midst of renovating the city's highway, and my on-ramp of choice is swimming in a sea of cones and construction equipment (greatly reducing my chances of successfully soliciting a ride).

Two hours of fruitless thumbing and I turn to my map (conveniently located inside of my phone) and locate an alternate on-ramp three miles away. Time to walk (I didn't like this spot anyways).

An hour later I arrive at hitch spot number two (yes, I am now incredibly sweaty), and again, I am confronted with construction.

However, this time the shoulder is roomy enough for someone to pull over, and after another hour of thumb exercises, salvation arrives.

My ride is a local guitarist heading to his new apartment just outside the city, and even though he won't be taking me far, it is huge just getting out of the city center.

We talk a bit about my hitching plans for the day (specifically which route to take into Germany), and he graciously decides to take me an extra fifteen kilometers to a farther highway gas station where I buy him a sandwich after his debit card is declined.

KUMAMON TO THE RESCUE

Walking to the highway's entrance, I pass a car with a “D” on the license plate. What does “D” stand for? It stands for Germany.

Seeing an opportunity I make eye contact with the driver, “Are you going to Dortmund by any chance?” I ask.

“No, we're going to Düsseldorf,” the man responds in a Scottish accent.

Knowing that the worst that can happen is a “no” response, I ask, “Do you think I could get a ride?”.

Slightly taken aback by the bluntness of my question (or my stunning good looks), he looks at the woman in the front seat and they share a speechless glance. He turns back to me and says, “Have you ever been to Japan?”

Suddenly I'm the one on my heels – how does this Scottish wizard know that I've been to Japan? And then I remember my shirt. My shirt featuring the face of Kumamon – the mascot of the Japanese prefecture of Kumamoto.

“I have been to Japan! I just recently got back from Kumamoto,” I tell him.

“My wife and I lived there for fifteen years,” my new best friend says to me, “we would be happy to give you a ride.”

Now, thanks to a Japanese shirt, a Scottish man and his Sri Lankan wife are driving an American traveler into Germany from the Netherlands. It is a truly international car ride.

The couple is heading home to Southeast Germany via Düsseldorf airport. I ride with them for an hour, chatting mostly about Japan, and before I know it we have taken the exit for the airport.

You see, many people (who have not hitchhiked themselves) feel they are doing you a favor by taking you to where they believe to be a good hitching spot. Said people are rarely correct.

I should have preemptively asked them to drop me at the last rest stop before reaching the airport exit; instead I say my farewells at a gas station two blocks from the highway.

Now I am faced with the arduous task of hitching out of yet another city.

But hey, it's all part of the adventure.

STUCK AT THE DÜSSELDORF AIRPORT

Instead of heading directly to the highway, I walk over to the arrival terminal to ask (what I hope will be English speakers) for recommendations on where to catch a ride.

After my first few interactions with rental car employees it becomes apparent that nobody quite understands what it is I want to do. Turns out that hitchhiking isn't as cool (or as understood) as I had hoped.

New plan: ask for a piece of cardboard and a sharpie.

These items are more easily acquired than I expect them to be (new plan: successful), and after creating a beautiful sign reading “ZIEL DORTMUND” (which I am told means something to the extent of “DIRECTION DORTMUND”), I take to the street.

Turns out the freeway on-ramp is a single lane with no shoulder. Hooray!

I stand a few hundred yards forward from the ramp at the only place with enough room for a car to pull over – the driveway for a small hotel parking lot.

As usual, I get plenty of looks from passersby, but no bites (but also, no beratement, so I've got that going for me).

Once again I begin to feel pessimistic regarding my chances of receiving a ride (never allow this to happen whilst hitchhiking), but as always, I soon find myself confronted with yet another inviting car (this one stopped in the middle of the lane, blocking all traffic).

I quickly hop into the passenger seat as my ride resumes the flow of traffic and we get onto the highway. This guy is a winner and we spend the next hour fighting the afternoon rush hour all the way to Dortmund.

Like many before him, he recounts to me a story about how his spouse would be furious should they discover his having picked me up (being the filthy, degenerate, lowlife hitchhiker that I am), and, like many before him, I graciously thank him for his assisting me in my travels.

My day's mission is complete.

I wake up to the sound of rain, and am greeted in the kitchen by three of the apartment's five occupants.

“Enjoy the party last night?” one of them asks.

The tiny apartment, its every surface now littered with exhausted alcohol containers, had somehow accommodated upwards of one hundred people last night, and as per usual, I played the role of the token foreigner.

“I did,” I replied, “but I don't know about hitching out of here today,” I said, motioning towards the window.

We talk for a bit, and decide that given my post-party state and the current weather situation, hitchhiking should only be considered as a last resort (and by last resort I mean second only to taking a bus).

Normally, I would opt to stay another night, but I have reliable intel saying that I must arrive in Berlin by May 1 (really April 30), because May Day (apparently a day when “crazy shit” goes down in Berlin).

My new friends do me the favor of investigating bus prices to Hanover, and it turns out that (somehow) I can take a bus for only eight euros (at least that's all I had to pay the nice young German man who purchased it for me).

Given that I typically spend upwards of eight euros at rest stops along the way, I decide to take advantage of this bargain and check out the long distance buses of Germany.

I walk a few blocks to the bus station and board a bus not long after.

I fall asleep and I wake up in Hanover.

HELP FROM A POLE

From my host's home in Hanover, it was easy to reach a highway-accessible gas station on the edge of town.

I set up camp at the station's exit (maximize your exposure, but avoid exposing yourself) and read the local hitchhiker graffiti to pass the time between cars.

Armed with a brilliantly crafted sign, I proudly displayed it to each passing car, being sure to sport my most inquisitive looking face. Before long a Polish plated semi-truck stops maybe twenty yards in front of me. It is that time already?

I motion to the driver, “me?” who motions back, “yes, idiot, you”, and so I join him in his eighteen-wheeled carriage.

The driver speaks Polish and broken German. I speak “basic greetings” and “order a beer” German. Neither of us has any idea what the other one is saying (although he did manage to convey “Arnold Schwarzenegger” and “Harley Davidson” to me).

He knows (thanks to my exhibit-worthy sign) that I want to go to Berlin, and I know that he is a nice guy (because he offers me some Coke from a two liter he has stashed in the cabin). And that's all the understanding we need between us.

Getting closer to Berlin (as evidenced by the highway's mileage signage), he gets out his cellular device and places a call.

After lots of Polish he hands the phone to me, “English” he says as he points to the phone in my hand (and I have a flashback to my days in Jordan).

Out the other end, in a heavily accented voice, comes words of English, “Hello, my driver is going to drop you off at the last rest stop before Berlin”. Now this guy knows what he's doing.

“That's perfect,” I say, and I hand the phone back to the driver.

We soon reach what I hope to be my final stop before reaching my final destination. I thank the driver using the Polish I looked up on my phone (most certainly terribly pronounced), and hop down into the parking lot.

I'm so close I could almost walk at this point.

Left outside a freeway McDonald's and only thirty kilometers from my destination I have only one thing on my mind: I have to pee.

Unfortunately, since I am repulsed by Donald's Mc, I have to make my way into the surrounding forest to relieve the pressure building in my bladder (or else I risk being duped into buying some of French's fries).

Returning from the shrubbery I stick out my thumb for the first car attempting to exit the parking lot as I walk to the highway entrance. It stops. I see a Darth Vader figurine on the dash. I get in. Simple as that.

The car's destination is not Berlin, but rather a neighboring town that is connected to Berlin via a local train. Good enough for me.

We make quick time to the train station and the driver asks if it's alright for him to come into the station with me and help me buy my ticket. Is it okay? Do you want me to buy you dinner? Of course it's okay, you amazing person, you!

The ticket is only three euros and it's only three stops to the city center. After one more heart-wrenching goodbye, I am again alone, and off to my final destination.

I think I could get used to traveling like this.