Fortunately, not everything you can expose a child to is detrimental to their development (not sure I like using “child” and “expose” in the same sentence). Written by Pacific Crest Trail and Te Araroa thru-hiker, Carl “Bear Claw” Miller and illustrated by Dorreen Smith, The Inconsiderate Bear is a children’s book about a first trip into the wilderness.

This book has it all: life lessons, best backcountry practices, awesome full-page illustrations, and, of course, bears (spoiler alert: child is

For as long as he could remember, there were two things Gideon wished for – the first was to go on a backpacking adventure with his parents, and the second was to see a bear! On his first backpacking trip ever, Gideon learns a lot about bears, what it means to be inconsiderate, and that sometimes wishes come true when you least expect them to! 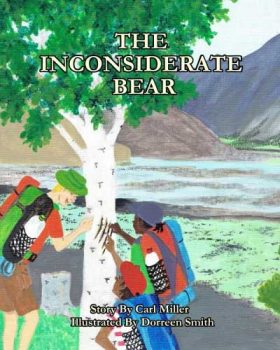 So if you’ve got a kid at home stopping you from getting out and doing the thru-hike that you’ve always dreamt of, then you had better get busy inundating them with tales of the backcountry so that they’ll forgive you when you finally snap and go for a five-month walk in the wilderness.

It’s available now in paperback on Amazon (although I a leather-bound hardback edition to be released soon).

Leave a comment (or even better, an Amazon review) to let me know what you think!