Pão de Açúcar (Sugarloaf Mountain) stands 1,299 ft / 396 m tall at the eastern edge of Rio de Janeiro, and is one the city's most iconic landmarks.

If you're thinking to yourself “I don't know what that is”, then know that it's that big dome-shaped hill with the cable car (if you still don't know what I'm talking about then just think back to that time you saw Moonranker.

The cable car has two stages: the first connects the foot of Morro da Babilônia and to the top of Morro da Urca; the second begins where the first ends and contines to the summit of Pão de Açúcar (note: the name “Pão de Açúcar” can be used to describe either the taller hill or the entire complex).

Although it may not look it (from the west), it is possible to hike up this hill – kind of (there's a bit of climbing involved).

*NOTE: The time listed above is based on my own experience. Please remember that your time may vary greatly.

GETTING TO PÃO DE AÇÚCAR

Pão de Açúcar is easy to get to since the cable cars are a big tourist attraction.

The trailhead is inside a park at the north end of Praia Vermelha, just east of where the cable car begins.

If you're committed, you can walk here from elsewhere in Zona Sul. If walking isn't your thing, then you can also get here via bus, car, or taxi. The closest metro stop to Pão de Açúcar is Botafogo (1.3 mi / 2.1 km away).

Once inside the park, follow the path until it ends (~.75 mi / 1.25 km) where you will find a large concrete pillar; this is where the real trail begins.

The trailhead isn't really marked, except by an informational sign warning of the dangers of climbing in this area and a sign in Portuguese that says, “Dangerous trail with risk of death. Do not use without the company of and experienced guide.”

Sneak around the left of the pillar to find the trail hidden behind.

NOTE: This track is generally considered a climb and not a hike. There is a fair amount of scrambling up exposed rock faces (you slip and fall, you die) and a section of trail that requires you to climb a 20 meter vertical section of rock (Costão do Pão de Açúcar). Most people use ropes and climbing gear to reach the summit (you probably should too).

If you skipped that section above because you think you're too good to read notes, then I suggest you go back and read it before attempting this hike.

The beginning of the trail follows the coastline around to nearly the easternmost point of the penninsula.

If you're uncomfortable with climbing up, over, and across the rocks in this section, then it would probably be wise for you to attempt this hike another time, because things only get trickier.

When you reach the other side of Pão de Açúcar, you will find a series of comcrete pillars seemingly leading up the rock. Follow them up and look for the continuation of the trail above you.

Most of the way up you're climbing up massive rock slabs (so shoes with good grip are recommended). Definitely don't attempt this trail in, or just after, rain.

The path up the mountain isn't too difficult to follow, and you're typically fine so long as you're following the path of least resistance.

As you get higher you'll have to climb some long and explosed areas of rock.

There are anchors available on each of the two long scramble sections in the case that you would like to secure a member of your party (there's a rather large drop-off – especially on the first one) .

Continue up and soon you will come to the most challenging part of the trail, Costão do Pão de Açúcar.

Costão do Pão de Açúcar is a near-vertical path of rock rising some 20 meters up the hillside – and there's no way around it (this is the easiest route to the top).

If you have experience climbing, then you shouldn't have much difficulty here (even without equipment). However, there isn't much room for error, and if you aren't too confident in your grip, your shoes, or your route, then it's best to attempt this section with climbing gear (or someone who knows what they're doing).

Your fist bit of climbing is quite easy and there is a nice ledge to hang out on before the second half.

The last part of the climb has two bolts (should you wish to use them), and requires some trust in your feet. It's here that you don't want to go tumbling backwards (at least not if you plan on walking again). It's probably 5a/V+/5.8; if you don't know what any of those things mean, you might want to bring protection.

Once past Costão do Pão de Açúcar, the trail falls back into it's rythm from earlier as you cross more rocky and exposed sections of trail. – nothing different from what you had to cross at the bottom.

After about thirty minutes you will find yourself atop Rio de Janeiro's loaf of sugar.

When you reach the summit you will emerge from the trail world and enter the tourist one (much like the climb up Corcovado).

On a clear day the top of Pão de Açúcar offers views of Flamengo, Botafogo, Urca, and Copacabana to the west, and Niterói, Icaraí, and Itaipu to the east. You can also see Corcovado (Giant Stone Jesus), Dois Irmãos, and Pedra da Gávea (to the west) as well.

It used to be free to descend via the cable car (you only paid to go up), but now a ride to Morro da Urca will cost you R$40, and if you want to go all the way down instead of hiking the (much more relaxed) trail down from Morro da Urca

But if you're a fan of downclimbing you can always head back the way you came. 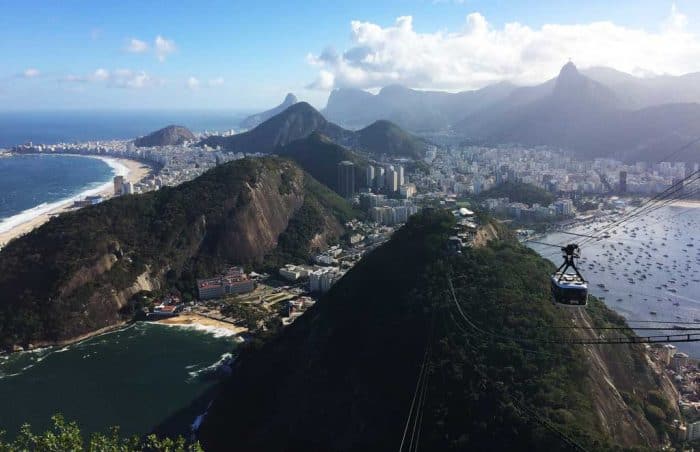 Honestly, you shouldn't attempt this hike without climbing gear and someone who knows how to use it.

The hike itself is rather short (as far as distance), but there's no lack of places to misstep and kill yourself. This is probably the most dangerous hike I've encountered in Rio de Janeiro (except for maybe the Pedra da Gávea alternate).

Just remember to have fun and be safe (nobody likes a dead gringo).

Have any questions about hiking Pão de Açúcar? Want another post about another one of Brazil's hikes? Have a suggestion to improve this information?

Thank you for the article! Are there enough anchors in dangerous places? Or by climbing gear you mean not only sport climbing stuff but also gear for trad climbing?

No trad climbing gear necessary. Sorry for the confusion!

Hi mate, enjoyed your article and am in Rio for 24 hours from Christmas Eve to Christmas Day on my own before heading up the country. I’m planning to run the two peaks on Christmas Day morning before catching my flight. Stay in Copa and run up to Cristo statue, back down and to Praia Vermelha and then hike up to the summit of Sugarloaf. I note your comments about needing ropes and a guide. Do you know how I would go about finding a guide? If not, I’ll just climb until I feel its unsafe to continue without ropes and go back.
Cheers, Johnnie

Don’t know anything about guides 🙁 I would honestly recommend that you look into doing Pedra da Gávea instead of the two you mentioned. It’s objectively better.

Thanks mate for your suggestions,
they have been precious. Path/climb done today, it was fun. Just some updates (10/2019):
now the way down from the top to Morro da Urca is free again. Just tell to the guy at the turnstiles that you came climbing and he’ll open the gate.
Definitely recommended ropes if you are not confident in climbing free a 5a (French) V+ (UIAA) 5.8 (YDS) (it’s just a small passage but it matters).
In any case you will appreciate having climbing shoes and chalk.

Obrigado for the update, friend!