Yes, I Was Assaulted and Robbed in Rio

I opened my eyes and there was a man standing over me.

“Are you alright? What happened?” he asked me in Portuguese. I looked around incredibly confused as to where I was or what was going on.

It was almost four in the morning and I was sitting in the middle of the street, my head hurt, and this person I did not know was asking me questions I had no answers to.

And suddenly I remembered. 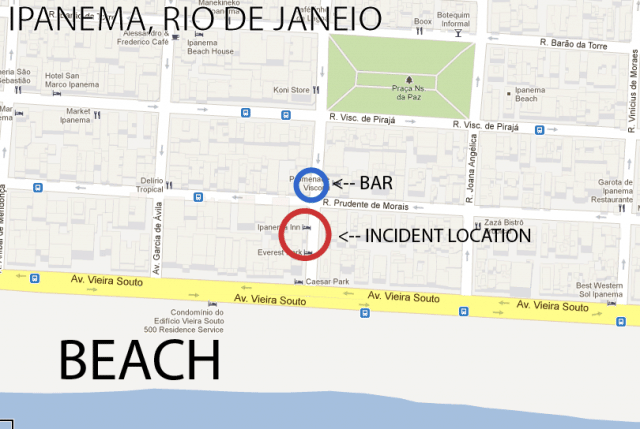 The sudden grip of an arm, struggling to breathe, the tunnel vision, the fading to black, and the sound of my watch coming undone. Then this.

“I just got robbed” I responded, “someone stole my watch”. I remembered being in darkness, but somehow still hearing the sound of my watch being undone, and I knew what had happened.

The stranger helped me up and I felt for my wallet, phone, and keys – all accounted for.

Then it was his turn. “What happened?” I asked him.

He said that when he came upon me, my assailant had told him that I was his drunk friend that he was helping home – a lie he did not believe. Thankfully that was enough to scare the son of a bitch off without my valuables (I didn't like that watch anyways).

We made our way to the barraca on the nearby beach where my savior bought me a cerveja and called the police. I was still in a haze, and the gravity of what had just happened had yet to be fully appreciated.

I thanked my new friend and fumbled into the back seat of the small two-door police cruiser. Beer in hand, I sat and tried to answer the officers' questions as best I could. We then proceeded to drive around the neighborhood looking for a person whose face I had never seen.

The whole situation was a bit ridiculous to me (sitting in the back of a police car, no seatbelt, drinking a beer, looking for a faceless assailant at five in the morning), and soon I told the officers to take me home (not far from the incident's location). It was almost sunrise, and I had to make it to PUC for a 9:00 AM final.

I won't go into detail about the events that transpired earlier in the night, but needless to say I was quite inebriated, I was alone, and I was barefoot when the aforementioned events transpired.

When I was attacked, I was attempting to resolve the barefoot situation by retrieving my sandals from the middle of the street (we need not discuss how they got there in the first place).

Having just said goodbye to some friends at the beach, being only one block away from a still crowded bar, and walking next to a luxury beachfront hotel in a “good neighborhood”, I did not feel at all threatened. Which should have been my first clue that something terrible was about to happen.

I only remember a few seconds between when I was grabbed around the neck and when I passed out, but they were some frightening seconds. My brain immediately concluded that I was about to be jumped by multiple assailants, who would proceed to beat the daylights out of me, but fortunately such things did not come to pass.

Sure this could have been avoided had I employed more sense and caution, but after more than seven months of living in Brazil I had become quite confident in my safety situation.

From all my time spent in Rio de Janeiro, I can say with confidence that I do not believe it to be a dangerous place.

Sure, I got choked out in the middle of the street and had my watch stolen, but I was also the textbook example of what not to do should you wish to remain unmolested in a major metropolitan area.

So what was I doing to increase my chances of being robbed? 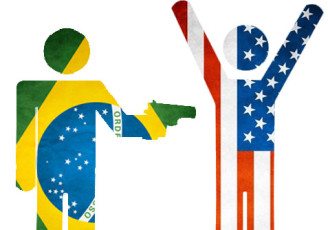 All of this should be common sense, but after numerous successful outings in a place, the rules of common sense can easily be forgotten or brushed aside.

Everyone loves to tell you as if they know better (sometimes they do), to “be careful out there” (especially when you travel abroad).

So now it is my turn: as awesome as the world and most of its people are, you can still find a turd in the punchbowl every once in a while, so be careful out there folks.