Discrimination on the Continental Divide Trail (Class of 2021)

The Continental Divide Trail has been growing in popularity over the past decade. An increasingly diverse group of people from around the world now braves this thru-hike each year. The trail crosses the states of New Mexico, Colorado, Wyoming, and Montana (with a brief dip into Idaho near the Montana border).

As part of the Continental Divide Trail Survey, I've started to ask hikers about any discrimination they experienced on the trail – whether it be from other thru-hikers, other hikers, or people in town.

The thru-hiking community at large consists of awesome people but that doesn't mean it's perfect. People both on and off the trail can, and do, exhibit discriminatory behaviors and attitudes toward CDT thru-hikers.

As this is a new addition to the survey, I am happy to hear feedback on what would make this information more useful, insightful, or otherwise valuable to the thru-hiking community. I have already prepared next year's survey to capture more location-based data surrounding hiker experiences.

Discrimination on the CDT

Here is a breakdown of the percentage of Women, BIPOC, and LGBTQ+ hikers who experienced discrimination both on and off the trail.

According to the data, people in town were generally more problematic than other hikers, but not by much. Here's a look at the numbers.

When asked to recount examples of the sexism or otherwise inappropriate behavior witnessed on the Continental Divide Trail, here are some of the responses received.

A Note on Older Hikers

As with the Pacific Crest Trail, I received a few responses in this section from older hikers regarding their treatment by younger hikers.

Hikers also (occasionally) reported a general sense of aggression toward hikers along the trail. Although I do not have specific details regarding where these towns were, it's something I hope to capture in next year's data.

Next year, I will aim to capture more detailed information regarding which towns hikers found most hiker-friendly and which were unwelcoming to Continental Divide Trail hikers.

I get a lot of people asking every year how to support the surveys and beyond sharing them with your close-knit bubble of weird hiker friends, the best way to support the survey is to contribute via Patreon. You'll get access to exclusive posts, discount codes, live streams, and super extra cool stickers so that everyone will know how cool you are.

As stated above, this is a new addition to the Continental Divide Trail Survey. Hopefully, there comes a day when discrimination rates along the CDT are so negligible that they cannot even be meaningfully measured by the survey.

If you have any thoughts on how this data could be better summarized or used, please let me know. Next year, I'll be collecting additional information on where along the trail hikers experienced discrimination to recognize potentially problematic areas along the CDT.

For now, I hope what I was able to capture from last year's class helps to shed some light on issues in the trail community.

And for anyone wondering where the cover photo for this post was taken, it's from the Silver Dollar Bar & Restaurant in Leadore, Idaho. 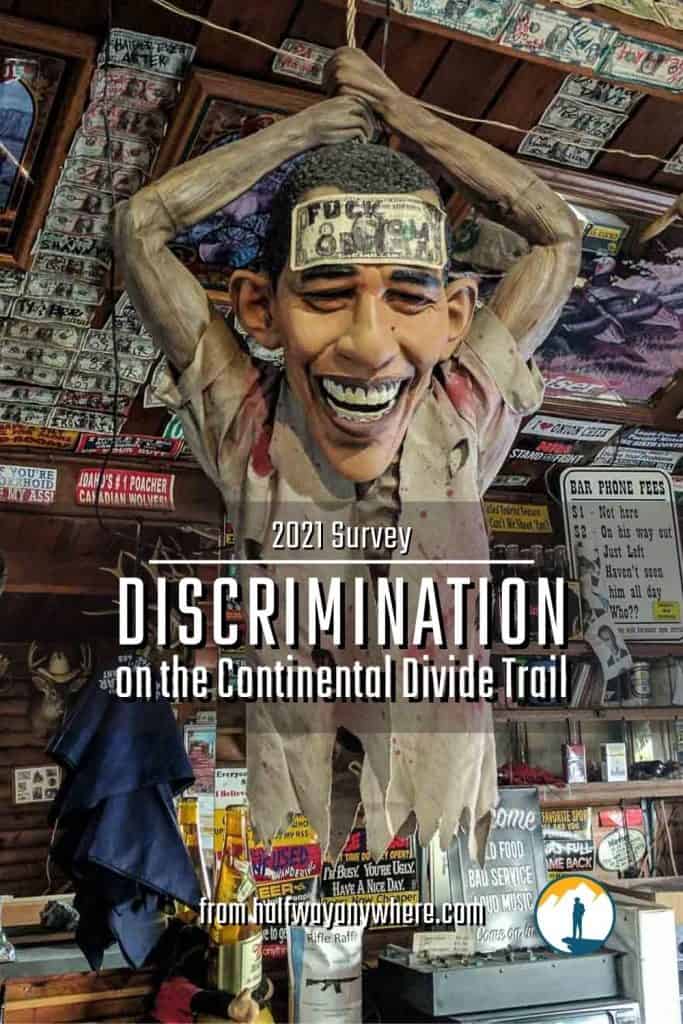