I am sure that some of you will come up with comparisons you would like to see that I have overlooked. I hope to make this a useful resource for CDT hikers, so if there’s anything that you think is missing, please leave a comment below.

That being said, I hope you enjoy this year’s CDT Gear Guide brought to you by the CDT Class of 2020.

If no label has been appended to a data point, then I used all data collected (i.e. it also includes section hiker data).

The Most Common CDT Gear

Typically, I would first discuss the highest-rated gear used by Continental Divide Trail hikers, but because we don’t have a very large sample this year, I don’t think it would be fair to take the ratings of just a few hikers to reflect each piece of gear.

In addition to the items noted above, these total base weights (that is, a backpack’s weight minus food, water, and consumables – like poop paper) are missing gear (headlamp, extra clothing, electronics, etc.). It brings us over halfway to the year’s average starting base weight of 18 lbs / 8.165 kg. Also, the stove included in this list, the MSR PocketRocket 2, does not include the weight of a pot.

Shelter Notes: For the weight of each shelter, I have used the packed weight – that is, the weight of the shelter including stuff sacks, guy lines, and stakes.

The Enlightened Equipment Revelation was the most common sleeping bag (quilt) on the CDT this year. The Revelation is highly customizable and comes in a variety of lengths, widths, temperature ratings, fill-powers, and colors. What’s the difference between the Revelation and the Enigma? The Enigma has a sewn footbox (i.e. the Revelation can be laid completely flat).

*The Enlightened Equipment Accomplice is a two-person quilt.

The Arc’teryx Cerium LT Down Hoodie was the most common jacket among CDT hikers this year. The jacket uses 850-fill goose down with a hip-length back, nylon shell, with two zippered hand pockets, and one internal pocket. It weighs just 10.9 oz / 309 g and, like the rest of the five most common insulated jackets, it has a hood. Men’s / Women’s

The Outdoor Research Helium II was the most common shell (that’s a fancy name for rain jackets) on the CDT this year. It’s a 6.4 oz / 182 g jacket made with a 2.5-layer Pertex waterproof breathable laminate. There aren’t pit zips, and you have just a single zippered chest pocket. It’s a popular jacket for thru-hiking, but be warned – it also elicits a lot of negative feedback from hikers who must endure heavy storms with it. Men’s / Women’s

The Sawyer Squeeze was (by far) the most common Continental Divide Trail water filter this year – of the fourth year in a row. It’s a $35, 3 oz / 85 g hollow fiber filter that rids your drinking water of protozoa and bacteria (and floaties). It can be used with the Sawyer bags (included with the filter) or with compatible water bottles (Smartwater is the bottle of choice for many hikers). The Sawyer comes in two smaller sizes as well, the Sawyer Micro and the Sawyer MINI.

The Black Diamond Trail were the most common trekking poles on the CDT this year. They have an aluminum shaft, cork handle, a FlickLock locking mechanism, weigh 17.3 oz / 490 g, and collapse down to 25 in / 64 cm.

The CAMP USA Corsa was the most common ice axe on the Continental Divide Trail this year. It’s the lightest ice axe on the list at 7.2 oz / 204 g and has an all-aluminum construction. The $120 axe has a straight shaft and comes in lengths of 50, 60, and 70 cm.

The Kahtoola MICROspikes Traction System was the most common traction system on the Continental Divide Trail this year (in addition to being the highest-rated). It’s an over-the-shoe, spikes-on-the-bottom system that weighs 13.1 oz / 371 g. It comes in four sizes and has stainless steel spikes.

The BearVault BV500 was the most common bear canister on the Continental Divide Trail this year. It has an 11.5 L capacity and is made from polycarbonate (transparent blue plastic). The lid can be removed without any tools (or coins) and measures 12.7 x 8.7 in / 32 x 22 cm.

Bear canister notes: Rocky Mountain National Park is the only place on the CDT where you’re required to have a bear canister. Just 22.1% of hikers brought bear-specific food storage.

The Altra Lone Peak was the most common shoe on the feet of Continental Divide Trail hikers this year. They cost $120 per pair, have a 0 mm heel-toe drop, and weigh 21 oz / 595 g per pair. Men’s / Women’s

Shoe Notes: Even if you knew for certain that each pair of your shoes would last you 700 mi / 1,125 km, buying yourself four pairs of shoes at the start of the hike would be a risky decision – what if the shoes aren’t as comfortable as you thought? What if your feet swell? What if you die?

Remember, you can buy shoes using this thing called the internet and have them mailed ahead on the trail (to a post office, hotel, local outfitter, trail angel, etc.) once you know that you’re going to need a new pair. If you encounter an emergency situation, you can always buy locally or simply wait around for your shoes to show up in the mail.

This is my first year collecting data on socks and the most common sock on the Continental Divide Trail is no surprise, it’s the Darn Tough 1/4 Cushion. They are made of 61% merino wool, 37% nylon, 2% Lycra spandex, have a medium cushion, cost $18 a pair, and have an unconditional lifetime guarantee. Do yourself a favor and get some. Men’s / Women’s

The Garmin inReach Mini was the most common personal locator beacon on the Continental Divide Trail this year. It can be used for two-way messaging, tracking, and as an SOS device. It does not have a color display nor does it allow you to upload maps to the device (but you can use maps via the app). It weighs 3.5 oz / 99 g and requires a monthly (or annual) subscription to function at full capacity.

*The Spot Gen3 has been replaced with the Spot Gen4 which is said to have more tracking features, a new enhanced mapping interface, and improved water resistance.

Base weight. The thing that completely defines some hikers and that others have difficulty defining. Basically, how much your backpack weighs when fully loaded with your gear, minus food, water, and/or consumable weight.

You can find hikers that will tell you that the best gear is the lightest gear and that there’s no benefit to carrying any “unnecessary” weight in your pack. You can also find hikers that will tell you ultralight gear is little better than badly-sewn-together garbage and that having quality gear (without regard to weight) is the only way to live your best trail life.

Ultimately, yes, carrying a lighter pack is more enjoyable than carrying a heavy pack. However, not having the proper gear if/when you need it can quickly eliminate any benefit realized from having a lighter pack. The base weight for you is the one you’re the happiest carrying. Anyone who tries to tell you otherwise deserves to fall down stairs.

We’ve covered the most common gear and the base weights of hikers on the Continental Divide Trail this year, and now we’re going to discuss gear specifics.

First, a bit about backpacks. Some of the best advice you can give anyone preparing for a thru-hike? Get out there with your pack on and hike (with a heavy load).

All of the highest-rated and most common sleeping bags (and quilts) on the Continental Divide Trail this year were between 10°F and 20°F (-12.2°C to -6.7°C). Which bag will be best for you depends on a lot – how warm of a sleeper are you? Which sleeping pad do you have? Are you sleeping in your clothes? With another person? In a small tent? Big tent? With a dog? Sasquatch? Here’s what this year’s class had.

Stoves on the CDT

It may come as a shock to some of you, but not all hikers on the trail carry stoves. Yes, cheese, tortilla, and Sriracha combinations may be all you need to power your hiking machine (yourself) on the trail. Here’s what hikers had for stoves this year.

THRU
13%
Percentage of hikers who did not use trekking poles

THRU-1
80.5%
Percentage of hikers who did not use an ice axe

THRU-0
56.8%
Percentage of hikers who did not use a traction system

Continental Divide Trail hikers obsess over their gear lists and what goes into their packs, but most everyone has something that could be considered a luxury item by someone else. Some people believe their phone to be an essential and multifunctional piece of gear while others may scoff at the idea of using one to take photos, listen to music, and use GPS in the wilderness. Here are the most popular “luxury items” on the trail this year.

For the final section of the Continental Divide Trail gear guide, I have gear advice offered by this year’s CDT Class. Remember, that each of these suggestions comes from a single hiker and they do not all necessarily represent the views of the class as a whole.

I get a lot of people asking every year how to support the surveys and beyond sharing them with your close-knit bubble of weird hiker friends, the best way to support the Continental Divide Trail is to donate on Patreon. You’ll get access to exclusive posts, discount codes, live streams, and super extra cool stickers so that everyone will know how cool you are.

If you’re not into Patreon, that’s cool, you can always Venmo @halfwayanywhere or PayPal [email protected]

If there is anything you can think of that would make this information more useful (or any more gear-related cross-referencing you would like to see), then please leave a comment below and let me know. 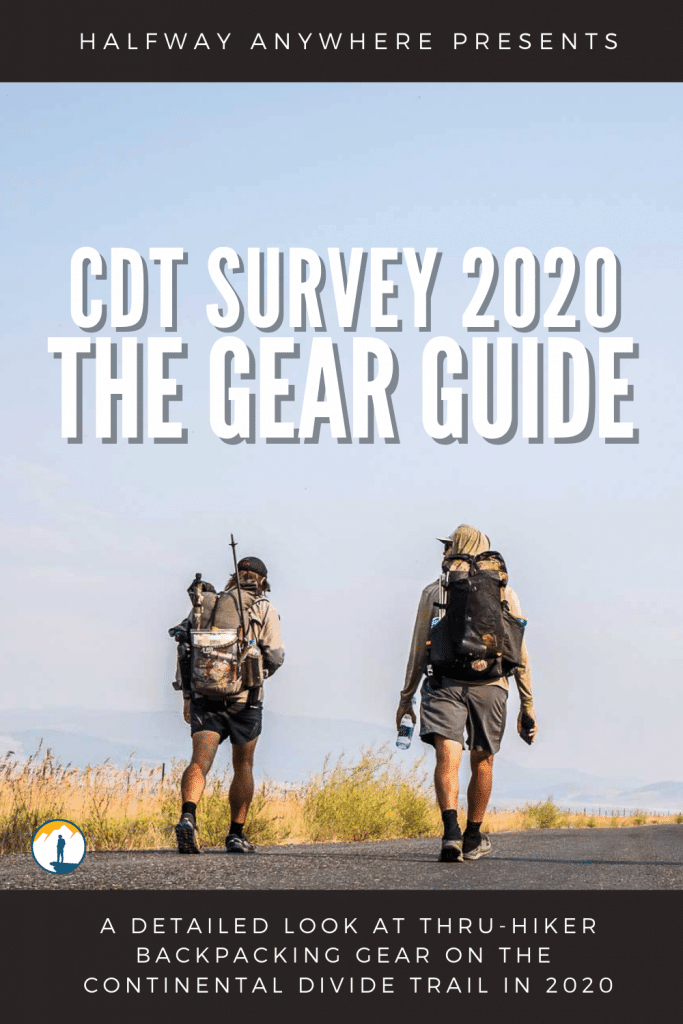