20 Movies to Watch Before Hiking the Continental Divide Trail

Waiting to start your thru-hike can be a lot like sitting on the toilet waiting for a bowel movement. You don’t want to rush it, you’re excited for it to happen, and you need something to keep you entertained during the wait. Thankfully, we have movies to solve this problem.

But before we get into this, did anyone else use to just read the back of the soap or shampoo bottle before the days of cell phones? Oh, the nostalgia.

Movies will help prepare you for a CDT thru-hike just as much as they would aid you in your BM (i.e. they aren’t going to help you at all). That said, watching movies will help pass the time leading up to (and hopefully get excited for) your walk across the States of United America (if your poops are long enough to accommodate the watching of an entire film, you may need to see a doctor).

Shifting gears. Do you know what I hate? Stupid copy-paste lists of the “Best Hiking Movies” or the “Best Adventure Films”. Yes, we all know that Into The Wild is the epitome of thru-hiking life. And yes, we all know that there’s a movie called Wild that’s vaguely about a woman thru-hiking the Pacific Crest Trail. This list is not those lists. No, this list has an actual connection to the Continental Divide Trail – the people, the cities, the wilderness areas, and national parks.

There’s something here for everyone.

The title Wind River refers to the Wind River Range in Wyoming – a highlight of the CDT. Want to watch a murder mystery rife with references to Wyoming’s CDT resupply stops? Wind River is just what you’re looking for. That said, most of the snowy mountain scenes are shot in Utah (but it’s not like you would have noticed if I hadn’t told you).

The lowest-rated movie on this list? Rat Race. This movie is about a group of determined individuals setting out on the adventure of a lifetime. Sound familiar? The goal in the movie is to reach Silver City, New Mexico. Silver City, happens to be the second stop (most) northbound CDT thru-hikers make. Coincidence? I think not. This movie is meant for CDT hikers.

The CDT is nothing if not an epic wilderness adventure. Who better to represent wilderness adventure than Robert Redford as mountain man Jeremiah Johnson? As the trailer says, “His name was Jeremiah Johnson, and they say he wanted to be a mountain man.” There are bears, wolves, angry old men, campfires, deserts, snow, and death. Just like the CDT!

In Contact, Jodie Foster works for SETI searching for extraterrestrial intelligence with the Very Large Array (VLA) in New Mexico (the VLA is an observatory with twenty-seven 25-meter radio telescopes). Outside Pie Town, NM you can visit a Very Long Baseline Array (VLBA) radio telescope (which is sometimes used with the VLA telescopes). Also, aliens

Ever wonder what will happen to you if you end up lost and stranded somewhere in the snowy San Juans or early-season CDT up in Montana (or Wyoming)? Thankfully, Anthony Hopkins and Alec Baldwin show us what to do in the 1997 thriller, The Edge. There’s a plane crash, unrealistic bear encounters, bushcrafting, and more bear encounters. A realistic portrait of CDT life.

Supervolcano is a BBC-produced made-for-television movie about the devastation that will grip the country and the world once the Yellowstone Supervolcano decides to kill us all. Will Yellowstone explode during your CDT thru-hike? Probably. Definitely watch this movie (available in its entirety on YouTube) to prepare for the aftermath.

Located on a popular CDT alternate, Ghost Ranch is a New Mexico resupply stop famous for being the filming location for movies looking for a rustic western vibe. One of these movies? 3:10 to Yuma. If you want to see what New Mexico wilderness and landscape have in store for CDT hikers, this is the movie. It’s basically a Batman prequel.

Last of the Dogmen

Last of the Dogmen is set in the mountains of northwest Montana, near the Idaho/Canadian borders. It tells the story of a bounty hunter and anthropologist who discovers an isolated Native American tribe. Most of the filming is from Banff National Park in Alberta, Canada (where CDT hikers can continue to via the Great Divide Trail after reaching Canada).

Despite its name, Nebraska tells the story of a man from Billings, Montana. If you want to get a look at the local company you will be keeping during your stays in small Montana towns, then this movie should give you a pretty good idea (lots of pickup trucks). It’s also the only movie here that was nominated for the Academy Award for Best Picture.

Do you have an irrational fear that a blood-thirsty bear is going to savagely murder you in the middle of the night? Does the fact you might get lost and subsequently eaten by animals cause you to wake up nightly in cold sweats? Great! Backcountry will definitely put your mind at ease. It’s definitely not about any of that (except it is).

Friends, if you haven’t already seen Dumb & Dumber, you need to. This film is not only about the epic adventure of two best friends, but it was also filmed at both Copper Mountain and Breckenridge – two stops along the CDT. There are more scenes still featuring Rocky Mountain National Park (where the CDT passes through). And hitchhikers – pick ’em up!

A River Runs Through It

Now that I’m going through it, there are a lot of movies on this list filmed in Montana, but I guess it’s just because wilderness. A River Runs Through It has young Brad Pitt taking us on a journey of fly fishing and outdoor adventures in rural Montana. This movie was shot entirely in Montana, so whatever you see is out there waiting for you on the trail (maybe).

Legends of the Fall

Did you know that Brad Pitt is in more than one mountain-featuring Montana movie? At least it’s supposed to be Montana. Legends of the Fall was filmed in Alberta, Canada (it’s supposed to be Montana in the movie), but the Continental Divide continues up through Alberta in the Canadian Rockies (where the Great Divide Trail is – at the northern terminus of the CDT). It has wilderness, bears, love, and war – basically the CDT.

Brokeback Mountain is filmed in New Mexico, Wyoming, and Alberta, Canada. It’s got mountains, wilderness, rural towns, campfires, camping, sheeps, guns, beer, bears, and, most importantly, love. The CDT isn’t just a physical journey, but also an emotional one. Brokeback Mountain reminds us to listen to our emotions and follow our hearts.

So you’re cool with black bears but grizzly bears still put the fear of God into you? After you watch Timothy Treadwell befriend and live alongside grizzly bears, all of your fears will be put to rest. This documentary, with actual footage of Treadwell interacting with grizzlies, will show you the lighter side of bears. What’s the worst that could happen?

Kon-Tiki shows the journey of real-life explorer Thor Heyerdahl’s 4,300 mi / 6,920 km crossing of the Pacific Ocean on a balsawood raft in 1947. He did this to show it was possible for pre-Columbian South Americans to settle in Polynesia. If you’re looking for something to stoke your flames of adventure and determination, this movie will do the trick.

City Slickers perfectly captures what it’s like for many first-time thru-hikers. Three friends from the city are looking for an adventure after becoming disenchanted wither their urban lives. There’s a cigarette-smoking old-man cowboy, slapstick mishaps, and pooping outdoors. Sure, they’re on horseback most of the time, but the idea’s still there. The CDT is all about being out of your element in nature and that’s exactly what City Slickers brings.

Lastly, how could I not include John Belushi starring in a comedy that shares its name with the trail. In Continental Divide, Belushi, inexperienced in the backcountry, heads to Colorado to investigate an eagle researcher. This film has scenes from the Rocky Mountains, Glacier National Park, and (for you PCT-lovers) Snoqualmie in Washington.

So what do we think? Have any movies that you think should be added? Un-added? Leave a comment and let me know. 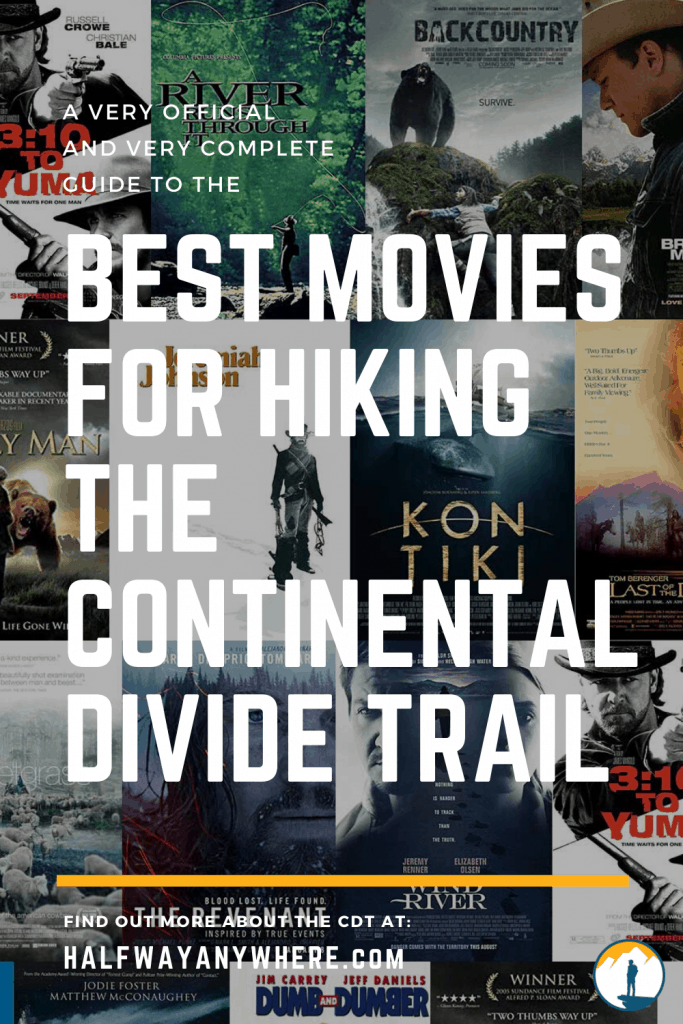 “A man’s got to know his limitations.”

“Now, remember, things look bad and it looks like you’re not gonna make it, then you gotta get mean. I mean plumb, mad-dog mean. Cause if you lose your head and you give up, then you neither live nor win. That’s just the way it is.”

Pretty much sums up a CDT hike.

But I’ll buy your list and put one DVD in each resupply box. Just about the right number to get from MX to CA.

I had to draw the line somewhere 🙂