And to reiterate in case of any doubts, yes, this applies to PCT thru-hikers. Being a thru-hiker does not exempt you from the rules (except the ones that say you should bathe regularly and shouldn't eat candy with every meal).

Effective July 18, 2022, and through July 17, 2025 (this will presumably be extended), anyone found without proper food storage will be subject to fines up to $5,000 per individual, $10,000 per organization, imprisonment up to six months, or a combination of both. That said, it should be noted that signs posted at ranger stations cite the fine as being $150 (still no excuse to not carry a bear canister).

Access to South Lake Tahoe where the PCT crosses Highway 50 is immediately south of Desolation Wilderness which means the new order is (almost) just an expansion of where thru-hikers already needed bear canisters. It wouldn't make sense to mail a bear canister home from Sonora Pass and then have it mailed out again to South Lake Tahoe (or Echo Lake); hikers will simply have to carry them for longer.

Could PCT thru-hikers avoid having to carry a bear canister in this section by simply hiking through the entirety of Desolation Wilderness in a single day? Yes. Most hikers over 1,000 mi / 1600 km into a thru-hike won't see this as much as an obstacle. However, Desolation Wilderness is beautiful and it would be a shame to rush through it to avoid having to carry a bear canister for a few more days. But do what makes you happy (so long as you're respecting the rules and the bears).

Carrying a bear canister through Desolation Wilderness means either picking it up or dropping it off in Truckee, California accessed via Highway 40 (PCT mile 1153.4 NOBO / 1500.2 SOBO) or Interstate 80 (PCT mile 1157 NOBO / 1496.6 SOBO). The PCT also crosses a road at Baxter Pass – just north of the Desolation Wilderness border, but getting a ride to/from here would probably be more trouble than it's worth to just carry a bear canister a bit further.

Overall, these new regulations mean that most Pacific Crest Trail thru-hikers will be carrying their bear canisters for an additional 58.6 mi / 94.3 km – likely two or three days hiking for most hikers this deep into a thru-hike.

Which Bear Canisters Are Allowed?

UPDATE: According to multiple people who have spoken directly with Forest Service, Ursacks are not permitted under this new order – hard-sided canisters only.

The information currently available leaves it unclear whether an Ursack will be permitted, but the order states “canister” which an Ursack is (arguably) not. Signs at ranger stations note “hard-sided” containers. Hopefully, clarification will follow.

The following is a list of the bear canisters currently approved for use on the Pacific Crest Trail. 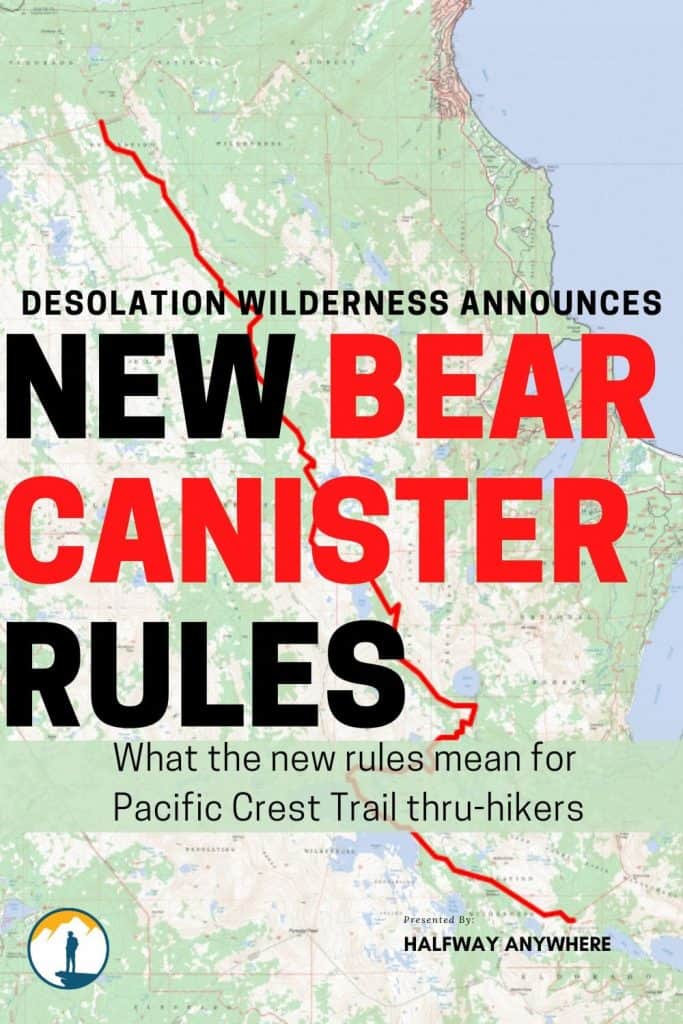