Forester Pass, the 13,153 ft / 4,009 m pass named for the United States Forest Service workers who “discovered” it, is the highest point on the Pacific Crest Trail and is the first Sierra pass encountered by northbound Pacific Crest Trail (PCT) thru-hikers (and the final pass crossed by southbound John Muir Trail hikers before climbing Mount Whitney). It sits on the Kings-Kern Divide – the boundary separating Sequoia National Park to the south and Kings Canyon National Park to the north.

It's located 7.9 mi / 12.71 km south of Glen Pass and 12.8 mi / 20.6 km north of the junction for Mount Whitney. The trail does a bit of up and down between the Whitney junction and Forester – the final approach to Forester Pass (heading northbound) begins at Tyndall Creek (which can be a tricky crossing in the early season or high snow years).

If you're unsure of what conditions are like in the Sierra or you're questioning how you'll cope with big climbs at altitude, Forester Pass is a great litmus test for what's to come.

Forester Pass: The South Side

The southern approach to Forester Pass begins at Tyndall Creek where the Pacific Crest Trail/John Muir Trail intersects the Shepherd Pass Trail to the east (where there's access to a trailhead via the 12,000 ft / 3,658 m Shepherd Pass) and the trail up to Lake South America and the Kern River to the west. The Tyndall Creek crossing can be difficult in the early season and/or in a big snow year; I found a place to cross the creek a good way north of where the trail crosses it (where it was raging and literally impossible to cross). There's a campsite with a bear box on the west side of the creek.

It's a 5.1 mi / 8.21 km hike up 2,244 ft / 684 m from Tyndall Creek to Forester Pass. The trail is fairly mellow most of the way up to the pass gaining an average of 440 ft per mile (83 m per km). The pass is visible for much of the approach – easily recognizable by the long, straight, sloping ridge coming down from the southwest along the ridgeline.

You'll pass a series of alpine lakes on the way to the headwall which climbs steeply up to the pass. Just before the trail gets steep (and if you're paying attention), you'll find a plaque affixed to a boulder dedicated to Donald Downs – a man who died as a result of an injury sustained during the construction of the trail over Forester (his arm was crushed by a boulder and he died from complications following an amputation).

There's a chute just below the pass (that the trail crosses) that can hold snow well into the late season (I crossed once in October and there was no snow). If you struggle with this bit of snow, then you might want to prepare yourself for some much scarier bits of trail if heading northbound in a high snow year.

The top of Forester Pass is small and not somewhere you will find much space for camping or activities. I've seen it pretty crowded with large groups of hikers as the trail near the top (especially on the south side) can form a bit of a bottleneck crossing the aforementioned snow chute (even in lower snow years). The final section of the trail isn't technical or tricky, but if there's snow you'll want to take your time since a fall could spell bad news (i.e. a helicopter ride).

Forester Pass: The North Side

The approach to the north side of Forester Pass starts at Bubb's Creek. If you follow this trail 12.28 mi / 19.77 km west, you'll reach Road's End in Kings Canyon National Park. However, the Pacific Crest Trail and John Muir Trail continue north toward Glen Pass (and past the junction for Kearsarge Pass which grants access to Onion Valley to the east).

Heading south from the intersection of the PCT/JMT and the Bubb's Creek Trail, the trail to Forester Pass climbs 3,595 ft / 1,096 m to the pass over 7.9 mi / 12.71 km – an average of 455 ft/mi (86 m/km). The trail follows Bubb's Creek, gradually climbing up the valley, until splitting from the creek near the trail junction for Golden Bear Lake and Junction Pass.

It's here, approaching 11,000 ft / 3,353 m, where the trail begins to climb more steeply. You pass a series of alpine lakes interspersed with areas of flatter trail (but still climbing) before heading up the ridge extending north from Forester Pass West (the peak just west of Forester Pass).

The final section of trail is a traverse along the ridge to a short series of switchbacks immediately below the pass. Overall, the north side of Forester is more gradual a climb than the south side. There's no long section of swtichbacks (at least not too long) or single “hardest part” of the northern side. The view looking north from the top of Forester Pass is just as grand as the view to the south – with University Peak sitting directly ahead and just a few hundred feet higher than Forester.

Forester Pass in the Snow

Crossing one of the highest passes in the Sierra Nevada while it's covered in snow may sound intimidating – especially if you have little or no backcountry snow experience. However, Forester Pass doesn't pose as great a challenge as some of its neighbors to the north. With that in mind, the pass should not be underestimated as it still requires you to be confident on snow and (probably) for you to use traction and an ice axe.

I used my ice axe during the climb up the southern side of Forester Pass and for the start of the descent down the northern side. That said, some of the hikers in my party used both traction and an ice axe on both sides while others used no gear at all. It all depends on what you're comfortable with – having the right gear certainly won't hinder your efforts.

The south side is steeper than the north side and you'll have the option of either kicking steps straight up to the pass or switchbacking up at whatever incline you're most comfortable with. Regardless of how you approach the south of the pass, you'll have to traverse the snow filling the chute toward the top. The climb up the south isn't incredibly steep, but it is still steep (if that makes sense). Basically, it's not something you look at and say, “how the hell am I going to get up that?” but it's still enough to make you stop and assess before starting the climb (or descent).

Crossing the not-as-steep north side of Forester Pass in the snow is less challenging than the south side, but it still requires that you pay attention to what you're doing. Traversing around the ridge extending north of the pass and then dropping off the east side is what most hikers will do (essentially following the route of the snow-covered trail).

I used my ice axe (not microspikes or snowshoes) to climb the south side of Forester Pass and for the traverse immediately north of the pass. I was with hikers who used both an ice axe and microspikes on both sides of the pass and with other hikers who used no gear for either side. It really depends on what you're comfortable with.

If you're interested in what snow gear Pacific Crest Trail hikers liked best during their thru-hikes, you can find out more at the PCT Gear Survey.

Forester Pass – the only pass above 13,000 ft / 3,962 m on the Pacific Crest Trail or the John Muir Trail – does not disappoint. In both clear and snowy conditions, it is a most awesome place to find yourself. In dry conditions, the lake at 12,200 ft / 3,719 m just north of the pass offers some great swimming opportunities and there are some grand camping opportunities to the south (including a bear box if you are as far south as Tyndall Creek).

The nearest road access, Shepherd Pass, isn't an extremely popular trailhead and it's an effort to make it to Forester from Onion Valley or Road's End (the two northern access points to the east and west, respectively). It's not as popular as its neighbor Glen to the north and most people exploring south of here limit trips to the Whitney or Horseshoe Meadow area, so you shouldn't expect large crowds unless you're here in peak PCT or JMT hiking season.

Any questions, comments, or concerns about Forester Pass? Leave a comment below or get in touch and let me know! 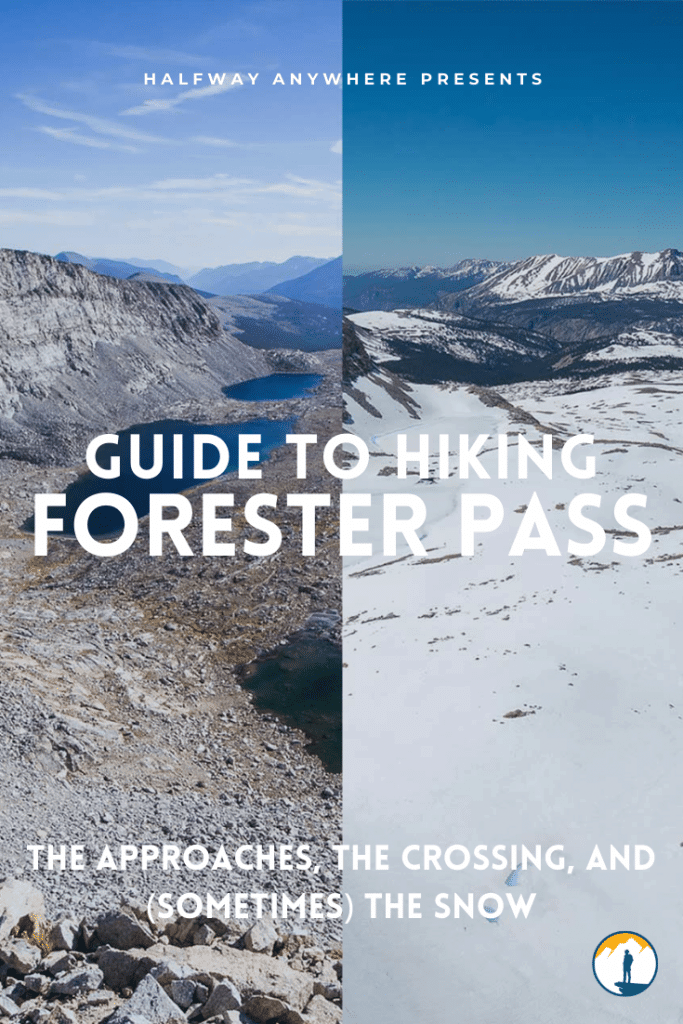