It's located 21.7 mi / 34.92 km north of Mather Pass and 27 mi / 43.45 km south of Selden Pass (if following the PCT/JMT). The trail over Muir Pass crosses the Goddard Divide, which runs east to west, between Mount Solomons to the south and Mount Warlow to the north.

The Muir Hut (aka the Muir Pass Shelter or the John Muir Memorial Rest Hut), located around the halfway mark of the John Muir Trail, was constructed in 1930 by the Sierra Club and was placed on the National Register of Historic Places in 2016.

It's a single-room granite structure with a 16 ft / 4.88 m high cone-shaped roof. Inside, visitors will find built-in perimeter stone seating and a stone fireplace (complete with raised hearth, mantel, and even an external chimney). However, note that fires both inside and outside of the Muir Hut are prohibited (as are all fires above 10,000 ft / 3,048 m in Kings Canyon National Park).

Lastly, remember that the Muir Hut is not a safe place during thunderstorms. The hut may shelter you from wind and rain, but you are not safe from lightning inside the hut. For more on thunderstorms (and what to do when you inevitably encounter them), check out this post.

Muir Pass: The South Side

The trail follows the river, passing plenty of campsites and with lots of access to water, as it gradually climbs past a series of lakes. The final (and largest) lake hikers reach before Muir Pass is Helen Lake (named for one of John Muir's daughters), the headwaters of the Middle Fork.

Muir Pass itself is relatively tame as most of the elevation is gained on the way up. In dry conditions, there are a few switchbacks leading up the final bit of trail to the pass; in snow, the slope immediately south of the pass should not provide too much of a challenge – no risk of avalanche or scary cornices (at least not from the pass itself).

The top of the pass is broad and there's plenty of room for pass-top activities and hut checking out. Beware the many marmots lurking about Muir Pass and Muir Hut – they will destroy your pack and everything you hold dear (and if you see anyone trying to feed said marmots, please gently remind them – or loudly yell at them – that marmots are not for feeding).

Muir Pass: The North Side

To the north of Muir Pass, hikers will find a series of alpine lakes and Evolution Basin – home to Evolution Lake and some spectacular Sierra scenery below Mount Gould, Mount Mendel, and Mount Darwin.

Heading south, the trail climbs 600 ft / 183 m before flattening out along Evolution Creek for a couple of miles. It then gains around 800 ft / 244 m and passes around Evolution Lake to the north and east. At the western edge of Evolution Lake, hikers can find the Lamarck Lakes Trail leading over Lamarck Col and down to North Lake (where there's road access to Bishop).

South of Evolution Lake, the trail passes Sapphire Lake on the west before following the eastern shore of Wanda Lake and passing southwest of Lake McDermand (just below the pass). The north side of Muir Pass is a very gradual ascent to (or descent from) Wanda Lake past Lake McDermand; it's even more gentle than the southern side.

Sapphire and Wanda Lake are popular areas for camping (particularly among JMT hikers); if you decide to camp here, keep in mind there's no camping (or pooping) within 100 ft / 31 m of water sources or the trail (and pack out your toilet paper – as required by the terms of your permit).

And remember that the Muir Hut will not protect you from lightning.

Muir Pass in the Snow

Crossing Muir Pass in the snow is less challenging than most of the passes to the south on the John Muir Trail and Pacific Crest Trail – Mather, Pinchot, Glen, and Forester.

The most difficult part of crossing Muir Pass in the snow is probably the long approaches. Neither side of the pass itself is particularly challenging. The steepest part of the Muir Pass crossing is not the pass itself but is instead during the approach from both the north and the south.

From the Middle Fork Kings River to the South Fork San Joaquin River, my GPS recorded 26.37 mi / 42.44 km in dry conditions and 24.48 mi / 39.39 km in the snow. A difference of 1.89 mi / 3.04 km. That said, remember that trudging through sun-cupped snow past frozen lakes takes a lot more time than cruising down nicely-maintained trails.

I didn't use my MICROspikes, ice axe, or snowshoes for any part of my trek over Muir Pass. That said, you may be more comfortable bringing something along (particularly since you'll probably be crossing more than just Muir Pass during your trip into the backcountry). If you're interested in what snow gear Pacific Crest Trail hikers liked best during last year's thru-hike, you can find out more on my PCT Gear Survey.

Thanks to the Muir Hut, Muir Pass is one of the more memorable Sierra Nevada passes despite it not being one of the highest. Located on the Pacific Crest Trail, John Muir Trail, and the Sierra High Route, it's a popular place to find hikers and probably not the best pass if you're looking for some solitude (especially when you count all the marmots who call it home).

Since Muir Pass isn't very steep on either side, the views from the top aren't as dramatic as some of its neighboring Sierra passes, but the lakes on either side – and Evolution Basin to the north – make up for the lack of a grand vista.

Any questions, comments, or concerns about Muir Pass? Leave a comment below or get in touch and let me know! 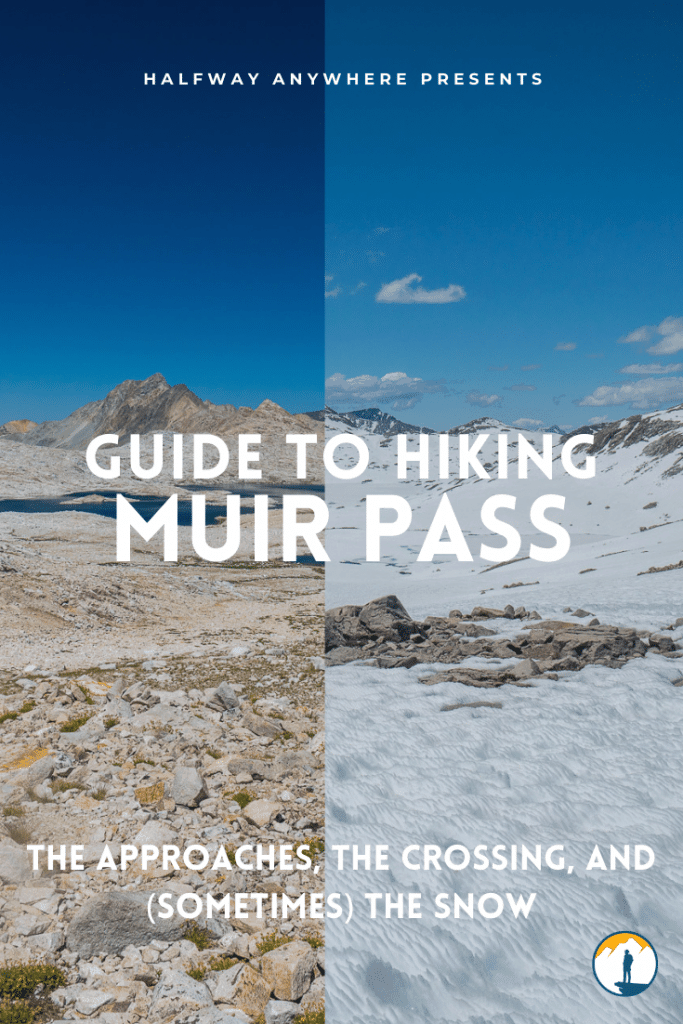