In the yearly Pacific Crest Trail Hiker Survey, hikers share both their lowest moments on the trail (physically, mentally, emotionally – the literal lowest point of the trail is Cascade Locks, Oregon), as well as when, if ever, they found themselves in a situation where they felt they were in danger or where they were legitimately afraid.

Hiking the PCT means more than blindly wandering down a path filled with trail angels eager to help hikers on their journey across the Western United States. A lot of the trail can suck (and sometimes it sucks a lot).

It’s not unrealistic to say that a Pacific Crest Trail thru-hike could be someone’s final adventure – you could end up caught in an avalanche, with heatstroke in the desert, surrounded by a forest fire, or in a hitch with a drunk driver (if you have a bad feeling about a hitch, don’t get in; wait for the next one). Hopefully, none of this happens during your (or your loved one’s) hike, but it’s possible.

Hiking the PCT Next Year?

Enter your email below to take next year’s Pacific Crest Trail Hiker Survey.

As a part of the thru-hiker survey, I also ask hikers, “What (if anything) was your lowest moment on the trail?” Yes, social media is filled with photos of sunrises, sunsets, and mountain vistas, but not of hikers pooping their pants, crying alone in their tents, or being swarmed by mosquitoes.

I wrote a post documenting my 11 Worst Moments On The Pacific Crest Trail to help hikers realize that going into a PCT thru-hike believing that every step will be a fabulous journey to discovering your life’s meaning, you are (likely) in for a rude awakening.

Read the following knowing that any one of these things could (and very well may) happen to you, should you find yourself on the PCT.

Terrible Moments on the PCT

Sick and injured on the PCT

Why the Desert was terrible

Why the Sierra was terrible

Why Northern California was terrible

Why Oregon was terrible

Why Washington was terrible

Have your own tale of woe from a Pacific Crest Trail thru-hike? Leave a comment below and warn future PCT classes of the awfulness that awaits them on their thru-hikes.

Hiking the PCT Next Year?

Enter your email below to take next year’s Pacific Crest Trail Hiker Survey. 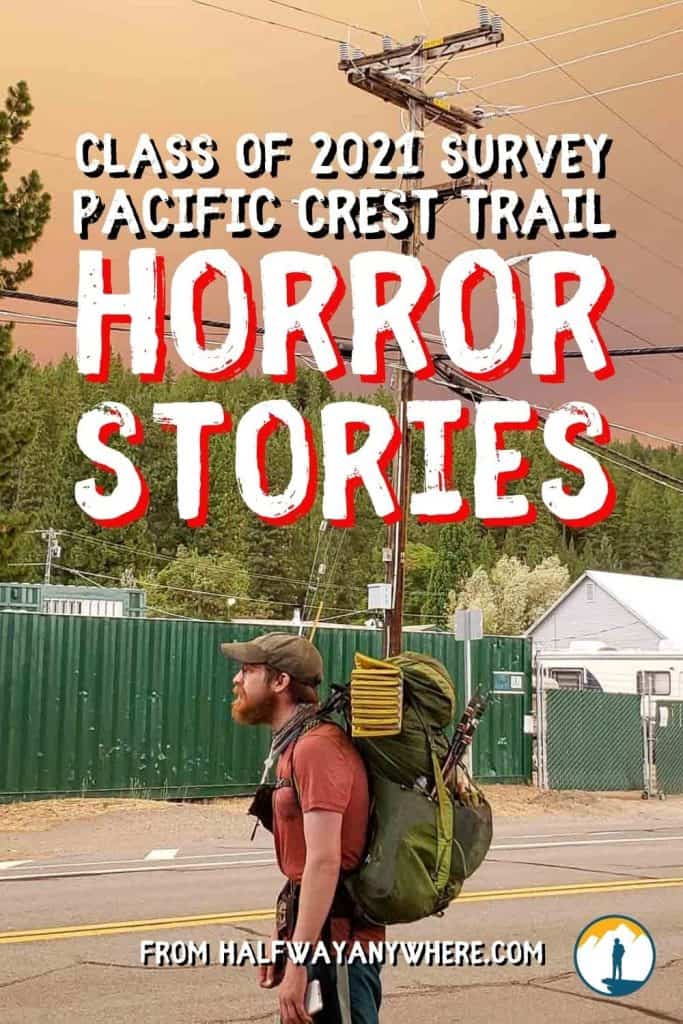 When I was a few hundred yards from the highway to get into Big Bear Lakes hiking in 2021 someone unknowingly fired an entire magazine from their pistol at me.

I was rushing to get to a trail angels house for a cinco de mayo party (that was an experience for sure, that I left) and was booking to get to the ride that had been arranged for me when I heard shots coming from up the hill and the bullets buzzing/cracking through the bushes next to me. It took me a second to comprehend what was going on and had absolutely no clue what to do, and nothing on the trail to take cover behind. All I could do was crouch down and yell and whistle. After 10 shots or so it was quiet, so after yelling some more and not knowing if it would start up again I decided to sprint to the highway.

When I got to the trailhead a couple minutes later there was a single Prius parked, and a super large (we’re talking obese) man with a backpack speed walking down the hill towards it while looking back towards me. I was at the point in my fight or flight response that I figured my life wasn’t immediately at risk anymore so I walked over to the guy pissed off. After asking about the gunshots he tried acting like he had no clue what I was talking about, and that he had thought he heard fireworks. He said he had been on a hike and asked ME what I was doing there. This was a 350 pound man, not sweaty at all, wearing safety glasses. I couldn’t believe it. At the same time the car shuttling me pulled up and tossed me a beer and I jumped in to get out of there.

Easily the craziest thing that has happened to me while hiking, and it took a couple days to fully sink in that those random shots were feet from completely changing my life. The photo that I slyly took of him in front of his car is one of the most memorable from the PCT, and something I pull up all the time when I bring up in conversation that I got shot at this summer. Going past all the gun ranges later in the hike made me superrrr nervous haha.

Never meet your heros they’ll always let you down especially. Those that have such negative image online being called out as scammers and liars and tramps

About ten miles south of Stevens Pass, I set my pack upright on a large flat rock. The pack tipped over, fell off the rock onto the muddy ground I was hoping to avoid, rolled a couple more times, went between two trees. As started to chase it, I saw it had gone off a 30-foot cliff and could hear it continue falling down a 50-degree slope, disappearing in the foggy mist. After two hours of dangerous bushwhacking on the steep slope I finally found it.

Did all your gear survive?

Yes, please do tell. What happened!?

I literally shit my pants numerous time while hiking on trail. On specific time was right passed High Bridge Ranger Station in WA. Having no other chonies to put on I just clean up as best I could and double bagged them. I only got about 10 miles in that day and I was completely defeated. I lost the mental battle after only making it 172 miles.

I’ve been an outdoorsman most of my life, camping/ glamping/caveman camping, hunting and fishing.
I’ve always wanted to do hiking like this, but after reading this I have to say, why would I put myself through an ordeal like this and to be sure no so much the physical part of it it would definitely be the personal security part of it specifically without the benefit of a firearm and I would imagine to most in this community something like that is frowned upon but you guys literally take your lives into your own hands from both animal and human predators.
Thanks for sharing your journey it was a fascinating read for someone unfamiliar with this lifestyle and nomenclature, so again thanks for that.)

Don’t forget that firearms are illegal in National Parks.

Yes totally aware of that, and always respectful of all local, state and federal laws.
Best.

I think you may be lost, Ben.

What isn’t said if for our pct hiking ladies to not wear short shorts hitchhiking. They show off too much leg. Making it look like a come on when not. Ladies please be discreet in public.

Can’t decide whether to delete your comment or just allow people to continue downvoting it.

Hey Mac, I vote for the latter for that misogynistic BS comment.

I literally wear shorter shorts than the gals I hike with, what are you on?