The Arc’teryx Cerium LT is a lightweight hoody weighing 10.8 oz / 305 g with 3.6 oz / 102 g of 850-fill goose down. It has a nylon shell, two zippered handwarmer pockets, and one interior chest pocket. It’s not the lightest of Arc’teryx’s lightweight jacket collection (that accolade goes to the Cerium SL), but it’s still among one of the lightest down jackets you can get (one-third of its weight is down).

It’s on the delicate side so you’ll want to be careful if you’re using it as your outermost layer, but I haven’t had any trouble in the hundreds of miles and dozens of nights I’ve had it out in the backcountry for (i.e. no rips in the shell and no issues with the zippers). Here’s everything you need to know about the Arc’teryx Cerium LT Hoody and whether you should fork over $379+tax for one.

Table of Contents
1 Testing Conditions
1.1 The Specs
1.2 The Features
2 Photo Gallery
3 The Good
4 The Okay
5 The Bad
6 Who is it for?
7 Popular Alternatives
8 Wrap Up
9 Find It Online

I have used the Arc’teryx Cerium LT a lot. It was with me on the Sierra High Route and has accompanied me on dozens of shorter trips and countless nights car camping or hanging around frontcountry camps. I usually retire my down jackets after I’ve beaten them into submission with constant use, but my Cerium is still going strong. It remains in my current puffy rotation and is among my favorites.

The Warmth: The Arc’teryx Cerium LT is dgoing to keep you warm in three-season conditions. I wouldn’t use it as my outermost layer for sub-freezing activities, but that’s not what it’s designed for. For summer and shoulder season backpacking, the Cerium LT should be more than adequate for most people in most conditions. I usually bring it along if I know I’ll need something to keep the chill out but I don’t expect to have to be hiking for extended periods in the jacket.

The Cuffs: The Cerium LT has elastic cuffs that I find to be rather pleasantly designed. Each cuff’s elastic is set within the end of the sleeve, so you don’t have the sort of rubber band-looking piece of material hugging each of your wrists (if that makes sense). I also wear a Garmin fenix 6X Pro Solar (which has a large 51 mm face) and getting the jacket cuffs over the watch can be incredibly annoying, but I don’t have much trouble with the cuff on the Cerium LT.

The Water Resistance: The Arc’teryx Cerium LT has a nylon shell with a DWR finish (DWR, by the way, stands for durable water repellent). In light rain, I don’t feel compelled to throw a shell on top of the Cerium LT, but I wouldn’t trust it for long in anything more than a drizzle. It’s also performed well in light snow (but I haven’t used it in anything close to blizzard conditions – nor do I think I would want to).

The Pockets: There are three pockets on the Cerium LT, two handwarmer, and one interior chest. They’re all zippered and are fairly average-sized as far as jacket pockets go. However, one thing I would like to point out about the hand pockets is they aren’t particularly deep, because they have long openings, and because don’t have any extra down in front of them (the baffles in front of the pockets are the same as the rest of the baffles on the jacket), I don’t feel like the pockets do a fantastic job of keeping my hands warm – especially if I don’t have gloves on.

The Zippers: The Cerium LT is an ultralight jacket. Besides the shell material, one place to save weight is the jacket’s zippers. The Cerium LT has four zippers – one down the full length of the front and one on each of the three pockets (two hand warmer and one interior chest). I haven’t had any issues with the zippers, but I also treat my ultralight gear carefully. Unless you manage to rip the nylon shell, the zippers will probably be the first thing to fail on a lot of jackets, the Cerium included. However, so long as you’re not putting them under a heavy load and you treat them with a bit of care, you shouldn’t have problems.

The Price: Yes, the Arc’teryx Cerium LT is very expensive for what’s essentially a feather-filled nylon sack. At $379, it’s one of the most expensive when compared to down jackets with similar specs. That said, you can generally find Arc’teryx products discounted at many times during the year (Arc’teryx isn’t typically an excluded brand for the big 20% off sales from places like REI and Backcountry) and since Arc’teryx is constantly updating styles and colors, you could even score one from an outlet or end-of-season sale for 25%+ off.

Beginner Backpackers: If the idea of spending lots of time outdoors is new to you, then I question what you’re doing reading a review of the Cerium LT. You probably don’t need to be spending nearly $400 on a jacket. That said, if the price is of no concern to you, then go ahead and get yourself one; you (probably) won’t regret it.

Weekend Warriors: The Cerium LT will serve the weekend warrior well, but if you’re only going to be using it every once in a while (and especially if you’re not going to get any casual use out of it wherever you live as well), it might be worth investing elsewhere in your kit before getting yourself such an expensive jacket. However, as I said above, don’t let me tell you what to do if you’re unconcerned about the price because it’s a great jacket.

Thru-hikers: The group of hikers probably most familiar with the Arc’teryx Cerium LT, it’s a great option for long-distance hikes with variable conditions or for hikes where space and weight are big factors to consider. I have no problem bringing the Cerium LT along as part of a lightweight backpacking setup.

The Arc’teryx Cerium LT is a great jacket so long as you’re aware of the fact that you’re paying a premium for a lightweight jacket to keep you warm.

The operative word here? Lightweight. Yes, it’s possible to tear the thin nylon shell, and yes, the zippers are small and must be treated gently. If you are concerned with the jacket’s durability, you probably don’t want something that many would consider ultralight.

Questions, comments, or personal experience with the Arc’teryx Cerium LT? Leave a comment below and let me know! 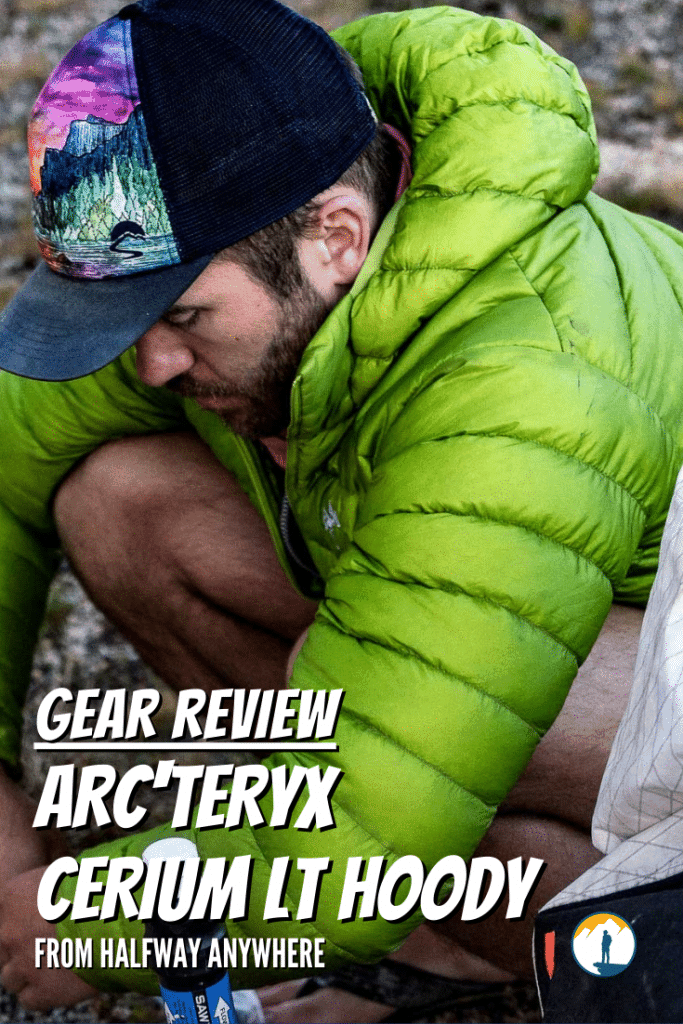