Just south of Sydney you can find the Coast Track – a 17 mi / 27km hike along the coast in Royal National Park connecting Otford to Bundeena.

The Coast Track can be completed in one day, but it’s most often done as a leisurely two-day hike (because swimming opportunities).

If you’re doing this hike in a single day there’s no permit required, but if you’re planning to camp in the park then you’ll need an overnight camping permit from the park office (I’m not sure how to go about doing this and completed the hike/overnight without a permit). 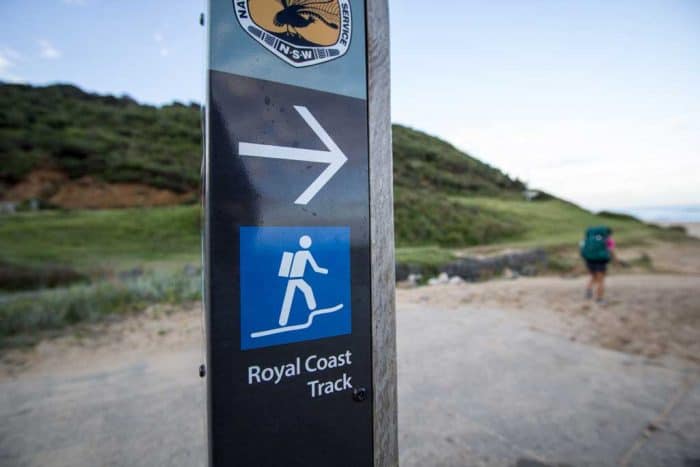 GETTING TO THE COAST TRACK

BY CAR: Parking is available at both the northern and southern termini (Otford Station Parking/Bundeena Parking).

TO SOUTHERN TERMINUS: The southern terminus, Otford Station, can be reached via train from Sydney in the north or Wollogong in the south via the South Coast Line. (NSW Transport).

TO NORTHERN TERMINUS: From Sydney take the T4 Eastern Suburbs and Illawarra Line to Cronulla (NSW Transport). Then take the Bundeena Ferry from Cronulla Wharf (ferry timetable). From the Bundeena Wharf you’ll have to walk to the start of the trail (located here).

The Coast Track can be hiked in either direction. I did this hike over two days beginning at Otford Station and ending in Bundeena.

When you disembark the train at Otford Station, head to the southern end of the platform across the tracks from the parking lot to find a set of stairs. Head up the stairs and then continue along the dirt road until you make your way out of the trees and to Otford Lookout.

Here you’ll find a map of the Coast Track, a view of the coastline (to the south), and the entrance to Royal National Park.

Now is a good time to remind you that a bathing suit (whether that’s something traditional, your underwear, or your birthday suit) is definitely a recommended piece of gear for this hike. The swimming opportunities (both fresh and salt water) are plentiful.

The first couple of miles of trail are relatively flat and dip in and out of the trees with sprinkled vistas throughout. Signs

Once you pass the Palm Jungle the trail opens up as it finally makes its way towards the coast (like on the coast as opposed to just near the coast). This is also where you can get to one of the Coast Track’s most iconic sights: the Figure Eight Pools.

I had some difficulty figuring out exactly how to get to the pools so allow me to explain the most straightforward route I managed to find.

You are still a bit inland from the coast as you head down to Burning Palms Beach (you actually pass the Figure Eight Pools on your way here). When you arrive at the beach, double back along the coast and the rocks until you reach the pools.

NOTE: accessing the Figure Eight Pools during high tide or rough weather is (actually) dangerous. Check the tides and swells to make sure you’ll be arriving at a good time.

Heading north, the trail begins what will be a trend for the next section of the hike: climbing up coastal cliffs and then descending to the beach ahead.

You’ll pass South Era Beach and then North Era Beach (where you can find North Era Campground). There is a toilet here and a creek (which may be dry) with room for 36 people across 12 campsites (there was no ranger or parks employee present here when I passed).

When you reach the next stretch of beaches, Little Garie Beach and Garie Beach, you can find restrooms, tables, and showers (Garie Beach is accessible via road and may be crowded in summer months).

I’m not entirely sure what the laws on camping are here, but I did not run into trouble.

After the climb up from Garie Beach the trail follows the cliffs along the coast towards another one of the trail’s more famous features: Eagle Rock (although it’s not quite as impressive as the Eagle Rock outside Warner Springs on the Pacific Crest Trail).

You keep along the cliffs for a while before reaching Wattamolla Picnic Area where there is a parking lot, tables, bathrooms (with water), and a kiosk where you might be able to buy yourself a snack depending on the season and the time of day.

Passing a nice swimming hole and Wattamolla Dam, the trail heads down to Little Marley Beach and West Marley Beach. After another bout of sand walking (hopefully you’re not fed up with walking on sand by this point) you’ll reach another tourit draw: Wedding Cake Rock.

This bleached white rock contrasts starkly with the surrounding landscape and looks rather foreign (I thought it was a construction site). Unfortunately, due to its popularity, Wedding Cake Rock has been fenced off by the powers that be and scaling the fence is, of course, discouraged.

Past Wedding Cake Rock, the track was undergoing renovations when I came through. But I decided to press on past the fences much to the dismay of the crews working on the track (sorry, guys). Hopefully, the improvements are nice when you head through this section.

Getting closer to Bundeena, the trail takes a sharp turn inland and briefly intersects Beachcomber Road. You can take this road to Bundeena and cut the hike short (the northernmost part of the hike goes out around a peninsula). If you’re not ready to leave the coast then stay on the track to head down to Shelley Beach and around Port Hacking Point.

MAP OF THE COAST TRACK

This map is not accurate, but it gives you an idea of where the Coast Track is.

Printed maps that cover this track are:

The Coast Track isn’t much of a wilderness experience, but it’s a beautiful trail and offers a lot to see over the course of just 17 mi / 27km.

If you’re in Sydney, then this is an awesome and easy way to fill a couple of days (a weekend, perhaps?) – just make sure you have a nice forecast ahead of you.

Go early, go swimming, and try to avoid the summer months if you aren’t too keen on the beaches being crowded with shark bait.

Have any questions about the Coast Track? Want another post about another one of Australia’s hikes? Have a suggestion to improve this information?