How to Get Your Thru-Hiking Triple Crown Award

This post was originally published on April 1 in the spirit of April Fools’ Day, i.e. the entirety of the below post is a work of fiction.

The Triple Crown is thru-hiking’s most coveted award.

Only awarded to those bold enough to complete the Pacific Crest Trail, Continental Divide Trail, and Appalachian Trail, it’s an honor bestowed upon only those with the maximum amount of time to devote to walking across the United States and pooping in holes.

But simply walking the length of the United States three times isn’t quite enough to receive your Triple Crown. The final test hikers must endure is a rigorous selection process with a complicated application phase.

This article will attempt to dispel some of the most common misconceptions surrounding the Triple Crown and will (hopefully) serve as a guide to those of you looking to finally get your hands on your Triple Crown.

One thing that makes getting your Triple Crown complicated is having to deal with multiple trail agencies to gather the necessary documentation.

You’ll first need to ensure that you’ve been included on the PCTA’s 2600 Miler List. You can fill out the form required to be included on this list here.

Then, you’ll need to make a formal request to the PCTA asking for your completion certificate. You can do this while reporting your finish via the 2600 Miler List or after the fact. Once you have your certificate, you’ll have to make a copy to submit as part of your Triple Crown Application.

If you have any additional questions regarding this part of the application, you can find the PCTA’s contact information here.

Fill out this form to be included on the CDTC’s list.

Similar to the Pacific Crest Trail Association and the Continental Divide Trail Coalition, the Appalachian Trail Conservancy (ATC) also maintains a list of Appalachian Trail finishers on their 2000-Milers List.

You can apply to be put on the ATC’s list here. If you prefer a paper copy of the form, you can print a PDF here. This form can then be mailed to:

Photos are oftentimes the only thing beyond someone’s word we have to prove that they hiked the trail they claim to have hiked. Can someone simply drive to the southern and northern terminus of a given trail and take a photo? Sure. But that would be a lot of work – and for what?

As part of your application, you’ll need to submit a photograph of you at both the southern and northern terminuses of the Appalachian Trail, Continental Divide Trail, and the Pacific Crest Trail.

If you don’t have photos of yourself at one (or more) of the terminuses, you can instead submit a drawing, done in blue or black ink, of you standing at the terminus. Make sure any text in your drawing is legible as knowledge of the terminuses is key to you receiving your award.

If you’ve hiked the Triple Crown, you’ve undoubtedly met hikers along the way.

Hopefully, you made friends with a few because you’ll need a 200-300 word testimonial written by one person you met on each of the three trails. Alternatively, a 2-3 minute video (posted to YouTube or Vimeo) can be submitted in lieu of a written testimonial.

In this testimonial, your fellow hikers must state that “to the best of their knowledge” you completed the trail in question and they must also provide a brief recap of your first meeting with them (noting place and time of day).

If you can’t find someone to complete this section of the application for you, a notarized affidavit can be used as a substitute.

Note: You cannot have a single person testify that you have completed more than one trail. Each trail must have a unique hiker and testimonial.

Oftentimes referenced as simultaneously the easiest and the most difficult part of the Triple Crown Application is the personal statement.

Each hiker is required to submit a 1250-1500 word statement on what thru-hiking means to them.

The format is open-ended and you need only ensure that your statement is 1) written in English, and 2) references each of the trails at least once. It does not matter which trail you hiked first or which aspect of the trail you choose to focus on.

Triple Crowners are encouraged to get creative with this part of the application. Previous examples of award-winning statements include ones written in iambic pentameter, one written as a dramatized interaction between a hiker and a hitch, and one written from the point of view of a mountain lion.

Note: Each year the top three submissions are chosen to be submitted to the United States National Park Service and added to the agency’s permanent collection in the Library of Congress.

The final piece of the application puzzle is the trail work requirement.

Every Triple Crown awardee is required to complete (a minimum of) sixteen hours of trail work. This work must be completed along one of the three trails (AT, CDT, or PCT) and must be completed in a single calendar year. If you fail to complete your trail work in a single calendar year, you’ll start from zero hours again on January 1 of the following year.

Be sure to have your trail crew manager sign off on your work before you head home.

Note: In some cases (for those hikers who would incur a “great financial burden” to travel to one of the three trails), exceptions can be made for the location of your trail work. You can contact ALDHA-West for more information on this.

To review, the pieces of a Triple Crown application are:

Once you assemble all these pieces, submit them to ALHDA-West and await the result of your application (typically 4 to 6 weeks). If approved, you will find your name added to the coveted Triple Crown of Hiking Recipients.

If you’ve made it this far, congratulations. Either I did an acceptable job of keeping this interesting or you are actually interested in getting your Triple Crown Award.

This post was published on April 1 and is not a guide on how to get a Triple Crown Award. 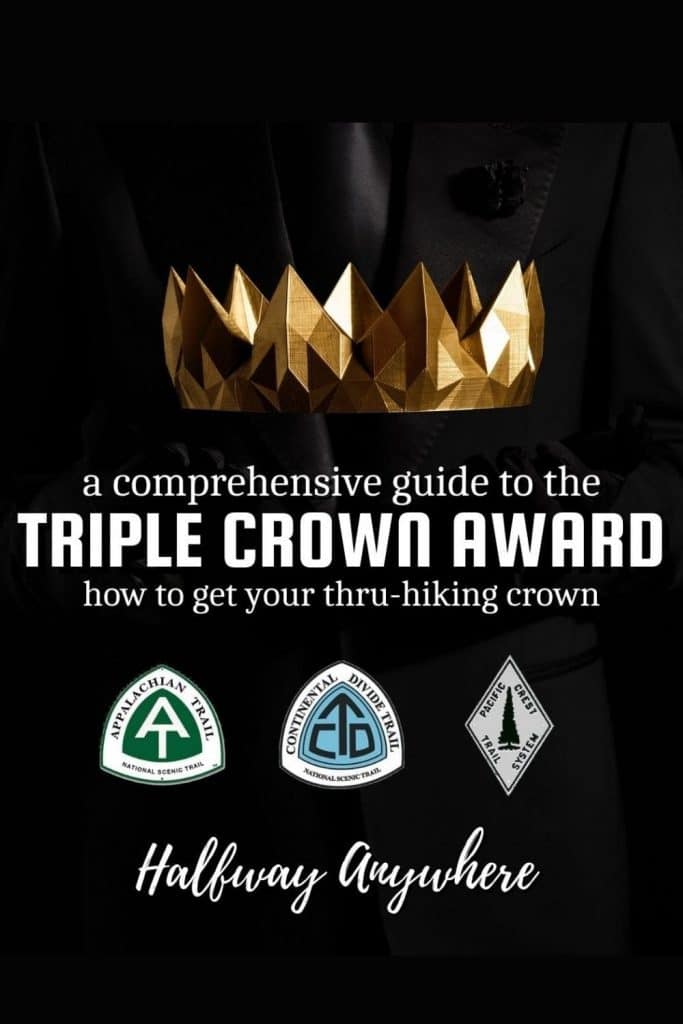