This late into the year, I'm sure we've all been reminded plenty that 2020 is/was, to say the least, different. The 2020 Pacific Crest Trail thru-hiking season was no exception.

I considered not conducting a survey this year as I didn't want to encourage getting on the trail. But since I don't promote/conduct the survey until the end of the hiking season (and since I doubt anyone is hiking across the Western United States for the express purpose of filling out an online survey), I decided to go ahead with it.

The fact is that there are people who thru-hiked the PCT this year (albeit far fewer than had plans to at the start of the year), and information from this year's class could still prove useful to future hikers of the PCT. And the information from those who chose to cancel their hikes could prove just as helpful.

That said, I am not publishing these survey posts to glorify or legitimize the decision to thru-hike during a pandemic. In case you missed them, I wrote not one, but two posts in March telling hikers to stay off the trail this year. In fact, a small contingency of 2020 crybabies (who are unjustifiably distressed and upset at the Pacific Crest Trail Association for not recognizing their 2020 thru-hikes) chose to boycott the survey because of my having advised hikers to stay off the trail.

CLARIFICATION: the crybaby statement above has spawned many hate-filled messages and I wanted to clarify whom I am addressing here. When I submitted the survey to various PCT Facebook groups requesting that hikers fill it out, I received a slew of hateful messages and comments by hikers bitter about me having posted the two aforementioned posts regarding canceling thru-hikes. I am not calling the entire class of 2020 crybabies – just those hateful crybabies who were angry at my gall for conducting a survey after my COVID-related posts. If someone can't understand why I posted those articles, then I don't know how they expect people to understand their decision to thru-hike. Hopefully, this helps – or maybe it will just make people angrier. *shrugging emoji goes here*

This is why the first installment of the PCT Survey this year won't be the usual breakdown (this will come next) but will instead focus on those hikers who made the difficult decision to cancel their hikes. The NOGO hikers. Get it?!

The PCT Survey exists to help people prepare for their hikes and I hope to make this year's survey as helpful as possible to future PCT hikers. I can't promise it will be as comprehensive as previous years, but I can promise it will (likely) be more helpful than your local REI employee (nothing against REI employees, but…yeah).

At the least, this year's survey has afforded me the chance to refine the survey's format, questions, and responses to better report on and share data from future PCT classes.

Planning to hike the PCT next year? Enter your email below to participate in next year's PCT Survey.

Here are this year's hiker demographics.

Where Hikers Are From

Pacific Crest Trail hikers may be mostly white, educated, twenty/thirty-somethings, but they are certainly more diverse when it comes to where they hail from. Every year, people come from all over the country and the world to hike the PCT. Here's a look at where hikers were from (or would have been from) this year.

A look at the distribution across the world – we've got representation from every continent (sorry, Antarctica, you don't count as a continent for PCT Survey purposes).

Since the USA dominates the world distribution, here's a closer look at where hikers come from across the Atlantic in Europe (the second-most represented continent).

How are you able to take so much time off to hike for five months across the United States? Probably a question that anyone planning a Pacific Crest Trail hike has been asked at some point or another.

This year, I asked hikers what they do for work (when they're not being incredible hiking machines) and how they were able to take time off to hike the PCT.

This year, hikers reported 135 different professions. The most common of which were:

That said, 12.81% (larger than any single profession) reported being retired. More on this in the next section.

So how was this year's class able to (or how would they have been able to) take all that time off and hike the PCT?

I've realized that there exists some ambiguity regarding the choices of “between jobs” and “unemployed” as they are essentially the same thing. Next year, I may qualify “between jobs” to mean that you have a job already lined up for when you complete the PCT.

I will also try to make sure that the “quit job” option is properly added to each of these options.

Many of the survey respondents this year didn't hike the PCT, but that doesn't mean they weren't planning their hikes for some time before COVID-19 shut the world down.

Here's a look at what the 2020 class looked like during their “Planning a PCT Hike” phase. This section examines first-time hikers, hiker experience level, and other trails hiked.

Instead of asking respondents whether this would be/was their first long-distance hike, I asked the distance of their longest hike to date (pre-PCT) – more on the specifics of this below. I decided to use 100 mi / 160 km as the cutoff for being considered to have completed a long-distance hike (sorry, Wonderland Trail hikers). If you want to yell at me for the arbitrary number I chose here (or suggest a better one), feel free to yell at me in the comments below.

These numbers are a lot closer to even than last year when 68% of hikers were on their first long-distance hike and 32% had previous long-distance experience.

In addition to asking the longest trail completed by hikers pre-PCT, I ask respondents to evaluate their level of backpacking experience on a scale of 1 to 10.

Note: this is their level of experience prior to beginning the PCT.

The most common trail this year's Pacific Crest Trail Class had experience with were the PCT section hikes and the John Muir Trail. I guess after getting a taste, hikers decided they're ready for the whole thing.

Next, we'll look at whether this year's class trained in preparation for their thru-hikes, what they did to train, and how they rated their fitness (pre-PCT).

Did you train before your hike?

What did you do to train?

“Other” mostly consisted of “walking” and/or some sort of bicycle riding.

I asked hikers to rate their level of fitness (on a scale of 0 to 10) prior to beginning the trail.

The question of how much money is required for a thru-hike is one that gets asked by a lot of would-be PCT thru-hikers each year. Sure, I may have written a post on the subject, but there's nothing better than hoards of hiker data.

Since in this post we're only examining questions able to be answered by hikers who canceled their hikes, I'm only including the pre-trail gear spend here (that is, the amount spent on gear before beginning the PCT). I'll be covering the cost of the PCT by those who hiked this year in a subsequent post.

A lot of Pacific Crest Trail permits were de facto invalidated this year by the stay-at-home orders issued and the fact that they require hikers to begin their hikes on their permitted day. But we can still look at whether people obtained permits and how they fared in getting a permit for their desired start date. Of this year's respondents, 98.61% obtained a PCT permit from the PCTA.

Did you receive a permit for the start day you wanted?

Permits for the PCT are (generally) issued in two phases and require that you be online at a designated time as hikers are randomly allowed to request permit start dates. I asked this year's class whether they got a permit for the date they wanted and whether they were happy with their permit's date.

Here's what this year's class hopes. to do regarding their PCT hikes in the future.

Do you plan on hiking the PCT in the future?

The PCTA has already forgone issuing their first round of permits for the 2021 hiking season. We'll see what happens next year as far as permits go, but 2021 (or 2022) could be a very competitive season for PCT permits.

I get a lot of people asking every year how to support the surveys and beyond sharing them with your close-knit bubble of weird hiker friends, the best way to support the Pacific Crest Trail is to donate on Patreon. You'll get access to exclusive posts, discount codes, live streams, and super extra cool stickers so that everyone will know how cool you are.

This is not expected. The data collected in the PCT Survey will always be free and accessible to everyone who wants/needs it. That said, your support is very much appreciated and helps to pay the website (and survey) bills.

Changes for Next Year

Every year I ask both the survey respondents and you the reader for feedback on the survey and what you would like to see done to improve the data or to make it more useful for future hikers. If you have any feedback, I would love to hear it – leave a comment below to let me know.

It takes a long time to put this together each year and I would love your feedback. Please COMMENT BELOW or get in touch to tell me what you think about this year's survey or what you think will improve future surveys!

Planning to hike the PCT next year? Enter your email below to participate in next year's PCT Survey. 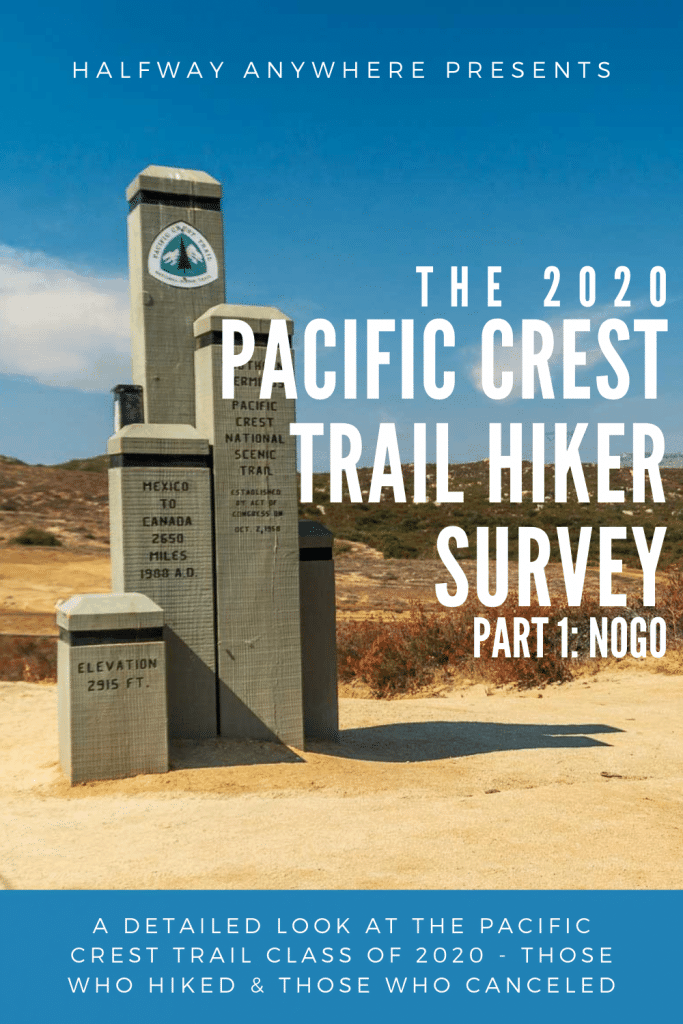