Suffering & Despair on the Continental Divide Trail (Class of 2019)

As part of the Continental Divide Trail Survey, I ask hikers what their lowest moments on the trail were and when, if ever, they encountered a situation where they felt legitimately afraid or in danger.

The CDT has a reputation for being more challenging than the Pacific Crest Trail and the Appalachian Trail, but that is something hikers can quickly forget once they’re wrapped up in planning their next great adventure.

If you haven’t already heard, the unofficial motto of the CDT is “Embrace the brutality” (but you really shouldn’t say this unless you’re a tool). Some of the more well-known fears about the CDT, like the idea that the trail is unmarked and mostly cross-country, don’t hold up as much as they used to, but that doesn’t mean the trail is any less of an ass-kicker. Those thunderstorms care not whether or not you’re on a trail, they’ll blast you regardless.

As a part of the thru-hiker survey, I also ask hikers, “What (if anything) was your lowest moment on the trail?”

We all share and get to see photos of those glorious sunrises, sunsets, and mountain vistas, but the lesser shared (and possibly far-more-frequent) moments of misery and frustration also deserve a look.

Read the following knowing that any one of these things could (and very well may) happen to you, should you find yourself on the CDT.

Sick and injured on the CDT

Why New Mexico was terrible

Why Colorado was terrible

Why Wyoming was terrible

Why Montana was terrible

Have your own horror story from a Continental Divide Trail thru-hike? Leave a comment below and warn future CDT classes of the awfulness that awaits them. 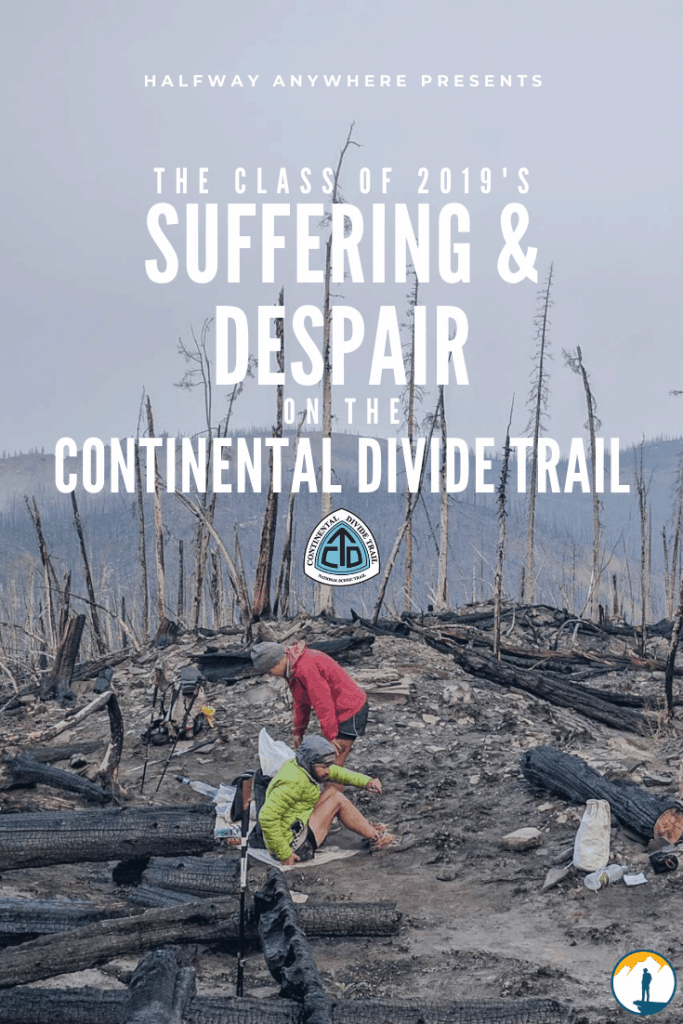 Wow! The human condition is still alive & well! These sound MISERABLE, yet everyone pushed on over & over. So glad to see some grit still in America! Wishing beyond hope, maybe one day. If I can do a year of grueling physical therapy….nah, again, who am I kidding. It is not just one thing with me, it is so many. It would be foolish for me to ever attempt one of these…takes all my willpower just to do 6 miles. (NOT gonna put rescuers in danger cause I am laid up!) God Bless all of you in your endeavors and thank you for sharing!

p.s. I kept working for three years in Baghdad with what I did not know was some serious injuries all up and down my spine. When the dropfoot got so bad I could not walk to the d-fac, that is when I decided to get looked at. An MRI in Kuwait city told me “You’re Done!” 10 years ago they wanted to replace both my knees, and fuse my lumbar AND cervical spine. Found out in a cat scan I now have emphysema and some previously un-diagnosed thoracic injuries. I push myself, but no where near to y’alls Herculean feats! Civilian Contractor, I purified water for the troops so they did not have to worry about biological, chemical, or nuclear attack through the water system. We are pretty much on our own when we come home. At least I have made myself walk, walk, walk, walk with my dogs. Thanks for reading if you have gotten this far. Hug the ones you love cause you are not guaranteed tomorrow. Lost my Mom & Dad last couple of years, all I want is a hug.

My best advice is ALWAYS treat/filter the water. I filtered EVERY source and did not get sick. I also had the ability to skip some of the more disgusting sources since I can go a long ways on little water. Read the notes about sources ahead and maybe carry more so that you can avoid the worst.

Not filtering your water does not make you cool.

Agreed…it just makes you sick. I met a lady that thought she had lyme disease because of fatigue and joint pain. But she also confided that she hadn’t been filtering all the time, so I thought it much more likely that she had a water-borne illness. Lyme is not all that common in the west…but giardia is.

I was nobo in 2016. I was near cumbres pass when I saw a sign that said ” welcome to colorful Colorado”. I thought that the trees looked just as green as the ones in New Mexico and didn’t quite understand the sign. 4 days later, a day short of Elwood pass, I removed my shoes and socks to camp for the night and all 10 of my toes were a very dark shade of purple. It was then I started to understand the sign

That was depressing. We post holed through the Sam Juans and my wife got swept away crossing a creek but managed to not drown. We eventually stopped at Cottonwood Pass. I would go back if I had others in their 70’s to go with. When a thru turns into a section the logistics become an expensive drag.

The trail can be a treacherous place – particularly the San Juans.

Any thoughts on why there is so much more sickness reported in the CDT suffering than the PCT suffering blogs? It sounds like a major trend from start to finish, but I don’t remember much mention of it on the PCT blog.

Water sources are a lot more questionable on the CDT and most hikers are more experienced which I think leads to less filtering (don’t know why this is a correlation, but I think it is).