I need to start this by telling you that, no, I have not done all the tracks in New Zealand, and no you will probably not find anyone else naming these same five hikes as their favorites – and that's okay.

The other thing that I need to tell you is that I've actually done all of these hikes. Maybe it's because I have my own blog or maybe it's because I hate when people don't create original content, but I can't stand all these lists of “Top 10 Hikes In New Zealand” by people who have clearly have not done any (okay, maybe they've done one) of the hikes they list. Farming the internet for something as subjective as “The Best New Zealand Hikes” could be done by anyone. What I'm presenting here is a firsthand account based on nothing but my own experiences.

Rant over, thanks for bearing with me there.

That being said, following this post, I will be writing another, “5 Hikes I Would Love To Do in New Zealand” post because during my time hiking here I have amassed a long list of hiking to be completed sometime in the future (sometimes I fear that my “list of things to do in the future” is growing so long that it will take more than a single lifetime to accomplish – but that's okay because I am going to live forever).

So now, in no particular order I present to you my five favorite hikes in New Zealand (so far). Detailed accounts of each hike to come at some point in the future. 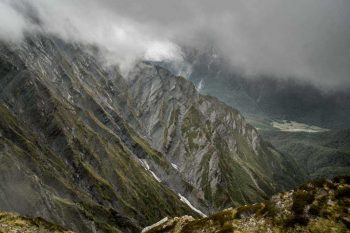 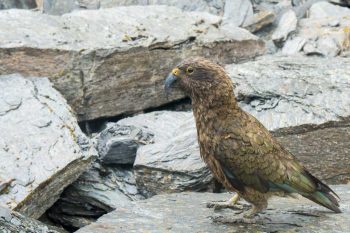 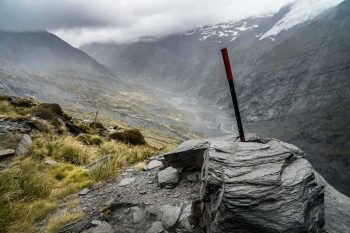 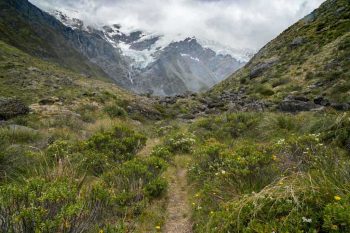 Cascade Saddle can be done as a day hike, but I did it as a one-way track between Mount Aspiring National Park (via Raspberry Creek Car Park west of Wanaka) and Chinamans Bluff (closest town to here is Glenorchy – 28.5 mi / 46 km from Queenstown) at the foot of the Dart Valley. You can also travel up (or out) the Rees Valley to reach Cascade Saddle.

If I were to do this hike again, I would start at Chinamans Bluff (I know, not the most appropriate name) and hike up the Dart Valley over Cascade Saddle and into Mount Aspiring National Park. This is because the Dart Valley isn't very interesting compared to everything between Dart Hut and Raspberry Creek Car Park and the views heading in this direction would be better (although route-finding might be slightly more difficult on the western side of Cascade Saddle going this way). 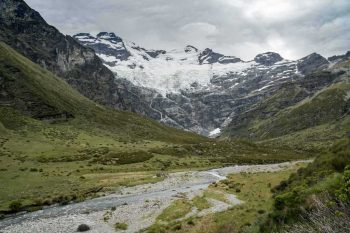 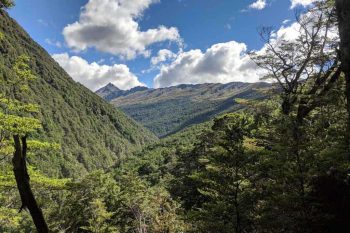 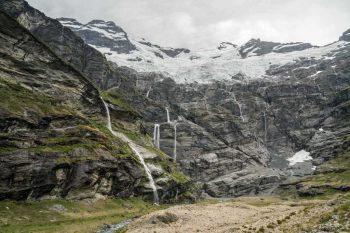 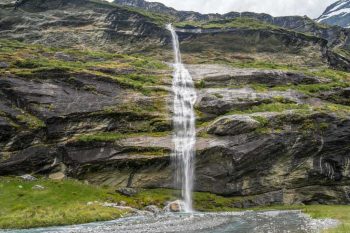 Earnslaw Burn can be done as a day hike, but if you have the time and equipment, I would highly encourage you to make it an overnighter; it's too incredible a place not to camp. The trailhead isn't obvious – it's just before the first turn in Lovers Leap Road when traveling from Glenorchy-Paradise Road (both unpaved). You may have to open/cross/jump as many as two gates to get to the start of the trail.

In spite of this being one of my “favorite hikes in New Zealand”, there is a caveat – the hike isn't very nice. That is, the actual hiking part of this hike – at least until you get above the bush line (that's New Zealand for tree line) – is not very fun (or interesting). At least those are my two cents. That being said, once you get above the bush line, the hike improves 1000%.

There is a rock bivy near the bush line (on the other side of the river) where you can stay if the weather isn't cooperating, but I would suggest hiking all to way to the end before camping. Once the terrain flattens out and you're heading to Mount Earnslaw, you may find the trail becoming faint or even disappearing. Don't be afraid. Just follow the valley up to the base of the mountain keeping the river on your left. It's impossible to get lost. Don't sell yourself short by only going part way and thinking you've seen it all. You'll know when you've reached the end, trust me.

Also, Earnslaw Burn Track is a popular destination for helicopter tours, so don't be afraid if/when a chopper touches down next to your campsite. 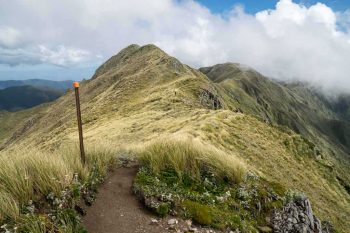 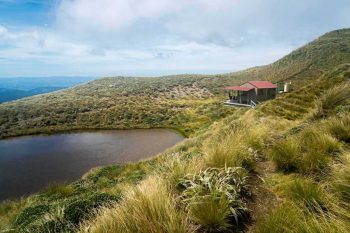 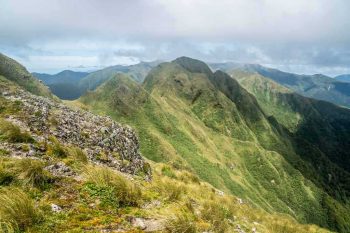 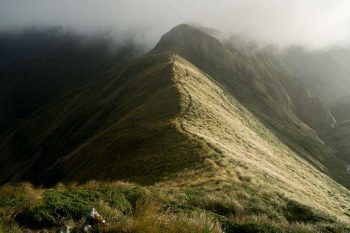 This hike isn't an official New Zealand Department of Conservation Track but is instead a route I put together by connecting a number of preestablished tracks.

I started at Kaitoke Road End (map) and hiked up to Alpha Hut via Marchant Ridge (note: there's no guaranteed water between the road end and Alpha Hut. Then I followed the Tararua Southern Crossing Track to Kime Hut. From here I stayed high on the ridge past Maungahuka Hut, Anderson Memorial Hut, Nichols Hut, Dracophyllum Hut, and Te Matawai Hut. From Te Matawai Hut I followed Gable End Ridge down and out via the Ohau Gorge (from the road end here you can either walk or hitch 6.5 mi / 10.5 km to Levin).

The highlight of this route is the section between Kime Hut and Anderson Memorial Hut. I had cloud during the first half of this stretch and clear skies once I made it past Maungahuka Hut; the visibility during the second half almost made me go back and do the first section again.

There are plenty of trails crisscrossing the Tararua Range and you could get onto or off of the ridge at a number of different points. Get creative; just make sure you hike the section mentioned above. 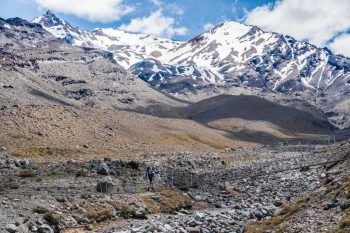 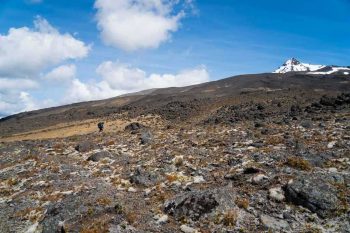 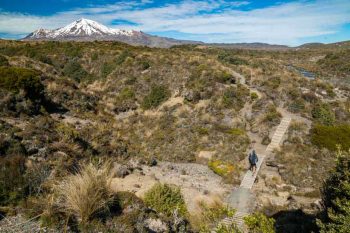 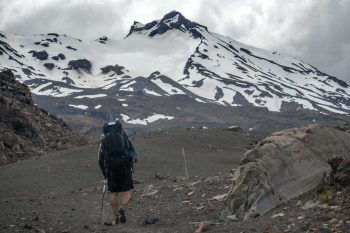 The Round The Mountain Track is a 41 mi / 66.2 km loop around Mount Ruapehu in Tongariro National Park (aka Mordor).

You can start this hike at three different points, but the most practical is probably in Whakapapa Village (map). The other two access points are the Waitonga Falls Walk Trailhead (map) on the south side of the loop and on the east side where it crosses Tukino Access Road (no parking here).

The volcanic terrain here is unlike anywhere else in New Zealand (except maybe for Taranaki in Egmont National Park) and if you're feeling ambitious you can also link this up with the Tongariro Northern Circuit (one of New Zealand's Great Walks).

You also have the option to climb to the summit of Mount Ruapehu, the tallest mountain on the North Island at 9,176 ft / 2,797 m (although this is now discouraged, not prohibited, by the New Zealand Department of Conservation); I guess having a skifield on a mountain isn't disrespectful, but climbing it is. 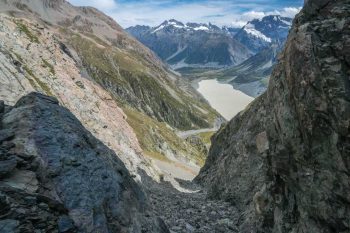 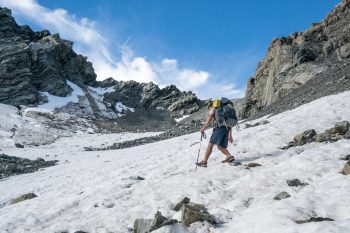 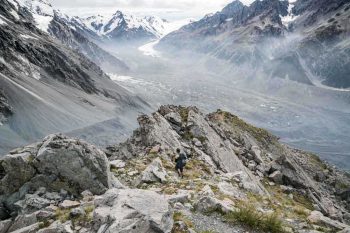 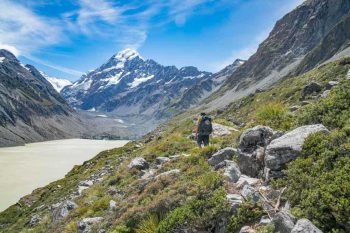 The route up Ball Pass is hands down the most difficult of the hikes listed here. Seriously, if you're not much into hiking and are not comfortable scrambling up long scree chutes or walking on snow, then maybe skip this one. On the other hand, if you want an incredible hike with no people and spectacular views of New Zealand's tallest mountains, look no further.

If you read about this route, you'll find reports telling you that a helmet, ice ax, and crampons are required. I did this hike in February without any of this gear. That being said, a helmet would have been smart (since you spend a lot of time scrambling up steep scree chutes with a lot of loose rock) and crampons would have made the snowfield on the western side of the pass safer (I did this in the late afternoon when the snow was softer – it wasn't bad and I could skirt the edge of snowfield for the steeper bits).

You can do this hike in either direction, but I would recommend hiking it from the Hooker Valley Track to the Tasman Glacier Car Park because the more difficult part of the hike is (in my opinion) the western side of Ball Pass (this is also where you're most likely to encounter snow trouble). Routefinding is also easier in this direction and the return to the Hooker Valley Trailhead is shorter if for some reason you decide to bail.

As there's not a ton of information on this hike online, I will be posting a detailed report of it soon(ish). I would definitely not attempt this hike if you're not going to have good weather (but that's just me).

Very nice. How do you get to/from the trail heads in NZ? I’m headed out there but unsure whether somehow getting a vehicle is necessary.

Mac
Reply to  Will

If you have time, you can hitch (I hitched to/from all these trailheads). If that’s not your thing you can rent a car (probably the best option) or arrange for transfer with local companies.

Nice work Mac. As pretty well a professional tramper (unpaid), I agree that list will give anyone plenty of pleasure (and some pain on the climbs). Regarding the Cascade Saddle trip agree with your comment regarding a switch to the Rees Valley for the approach. Much nicer.

Happy to hear I’m not alone in my assessment of the Cascade Saddle trip.

Cool write up about some of the lesser known tramps in NZ, completely agree with Mt. Aspiring and Tongariro. We were in Mt aspiring a year ago with plans to do the cascade pass but it was an late snow year so we didn’t attempt it since we didn’t have any mountaineering gear.

It’s good we didn’t too since that mile between the brushline and the pylon was some crazy exposure. We were day hiking out of Aspiring Hut and I had to turn back as some of the climbing without any wires or places to clip into was too much for me.

It’s too bad to hear that the Dart track isn’t as interesting, though sounds like the reward pass the dart hut is worth doing the rees/dart loop next time around. (The Dart was closed last year due to a mudslide so maybe the new trail work is why it’s in better shape.) Would you suggest that if I want to avoid going down that Cascade Route?

I definitely noticed where the slips on the Dart Track were. There’s what I think might be a temporary track through there right now. I’m not sure I understand your question at the end – care to clarify?

Sorry, I just wanted to get your opinion of doing a Dart and Rees hike (entering the Dart and out the Rees) with a day trip to the Cascade Saddle without going down the exposed Cascade Route from the pylon into West Matukituki Valley as a safer alternative?

Gotcha. Yes, if you’re doing the Rees-Dart Track, then a day trip up to Cascade Saddle is absolutely worth your time.