The Rio de Janeiro Marathon was my first marathon – my first organized race of any length – and was a great time (except for the pouring rain we had for nearly the entirety of the race).

I didn’t quite know what to expect, but since the Rio Marathon is a major race organized in a major city, I did expect a certain level of organization. Did the event meet my expectations? It did – but it mostly didn’t.

Here’s why, and a look at what it was like to run the Rio de Janeiro Marathon.

Note: It is more expensive to register via the English-language website than the Portuguese website. It is not difficult to use Google Translate to make your way through the “normal” registration on the Brazilian website. You will have to provide a Brazilian address, but nothing will be sent there (at least nothing was sent there in my case). I would suggest using a hotel in Rio where you plan on staying. You will also need to provide a Brazilian emergency contact number. If you don’t have a friend in Brazil, I again suggest using a hotel number.

I don’t know if this exists for all marathons or if it’s unique to Brazil (or some places) because of Brazil’s seeming obsession with “VIP” tickets to events – marathons included – but there are both basic and VIP registration options for the Rio de Janeiro Marathon.

What’s included in the VIP registration? A registration that costs nearly twice as much – R$430 vs. R$210?

What’s included in the basic registration?

In addition to this, VIP registrations also picked up their kits (before the race) at a different location in the Marathon Village. This location (which also serves everyone who registers through the non-Brazil website) had a shorter line but also far fewer people attending the line. It took nearly two hours of waiting in line for me to pick up my kit.

The promised bathroom, bar, and buffet were pitiful at best and the starting area was a mess (more on this below).

Is the Rio de Janeiro Marathon VIP registration worth it? Absolutely not.

Getting to the starting line of the Rio de Janeiro Marathon was complicated at best. The staging area was located off the main road with no exact instructions provided as far as where to arrive or be dropped off. Taxis and rideshares were all haphazardly parked up and down the roads letting runners out.

The marathon also began between five and six in the morning (depending on your projected finish time), i.e. it was completely dark when all the runners arrived.

There are a several roads, grassy medians, small rises/hills, and pedestrian walkways all parallel to one another around Marina da Glória (where the race began). Where precisely runners were supposed to go was not entirely obvious upon arrival (or even after wandering around/searching). There were no signs, staff, or indications as to where everyone was to go.

A lot of confusion. Eventually, I found the starting line and a runner-filled road behind it.

I found what I believed to have been the “VIP tent” which was a sad-looking canopy precariously placed on a hill near where runners were lining up on the road. However, there was no clear way to cross the road (lined with gates) to get to the shelter. When I finally reached it, there was fruit, juice, water, and crackers available. This was, presumably, the buffet and open bar.

It didn’t help that it had been raining all morning.

Apparently, runners were supposed to line up in corrals according to their bib color but there were no clear indications of where each group was supposed to line up, and the gates lining the road once again made this tricky. I ended up asking one of the security guards to open a gate and let me in. Whether I began when I “should” have started, I have no idea. Based on those around me, nobody else knew either.

I found it strange that there were no lights brought in to illuminate the starting line or starting area; it was dark. All the runners began in total darkness. It was a little bizarre.

The course consisted of two out-and-backs. One shorter stretch to the north and then a long stretch south down Flamengo, Copacabana, Ipanema, Arpoador, and Leblon before returning the same way with a brief detour into Leme on the way.

This would have been a much more scenic course if not for all the rain, but I won’t fault the event for the weather. What I will point out is that many of the roads used were either still partially open to traffic on one side or were split in half as part of the out-and-back (i.e. runners heading in each direction on opposite sides of a fence).

At the start of the course, it was dark. We ran around the completely dark Museu do Amanhã (Museum of Tomorrow); it would have been nice if they had the museum lights turned on at least as it’s a unique-looking building. Runners dodged concrete benches, pillars, and vegetation as sporadically placed event staff (without lights) yelled at runners to be careful to avoid these obstacles. A little bizarre and a terrible-seeming choice of route given the obstacles and darkness.

Much of the course seemed to be narrow and there was a lot of zigzagging between runners happening as people passed one another. For a while, I felt as though I was constantly either asking to pass or asking to be passed. Maybe this is what every big marathon is like, but I felt that the course in Rio was particularly bottlenecked in spots.

The Rio de Janeiro Marathon is measured in kilometers, not miles (as are most marathons around the world, sorry USA). Aid stations were okay, I guess? As I don’t have much to compare it to as of now, I’m interested to see how New York differs.

The Rio de Janeiro Marathon finish line was a mess, no other way to put it.

After crossing, there was staff handing out medals to finishers. Everyone’s race number had four tear-away rectangles. One of these rectangles is traded for a finisher medal. There were three other tear-away bits that neither I nor my Brazilian friend who also ran the marathon had any idea what to do with.

Runners were then corralled into the finishers’ area which ended up being a mob of people squashed between two fences. This “line” of people moved slowly forward for what seemed like nearly 30 minutes before I was finally into an open area beyond the finish line.

Volunteers gave runners water, Gatorade, apples, and bananas here. Again, the food was uninspiring and I did my best not to linger. There was no clear exit route available and so I ended up just cutting across some grassy knolls and then cutting across traffic until I was able to get onto a nearby street calm enough to call myself a ride.

Would I do it again? Probably, if I was already going to be in Rio when it was happening, but I certainly wouldn’t travel to Brazil just to run the Rio Marathon and I definitely wouldn’t register as a VIP (it was truly a joke).

Perhaps my expectations were a bit high as far as what to expect from an organized race, but perhaps not. I will find out soon enough when I head to New York for the NYC Marathon which is nearly ten times the size of Rio’s. 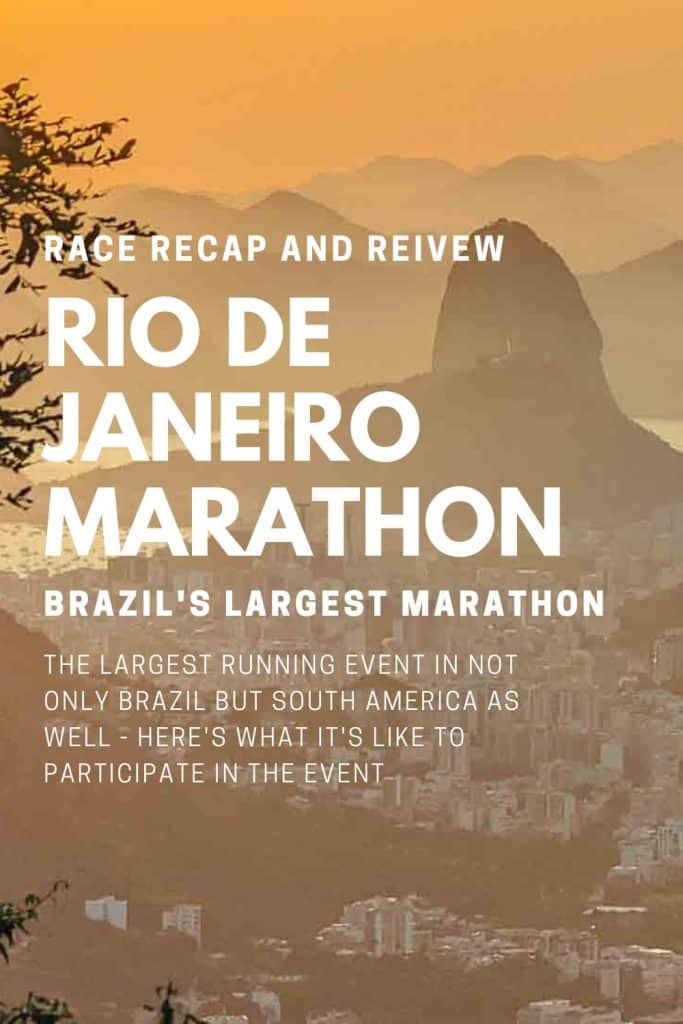