Getting Into the New York City Marathon

After winning a Grand Canyon rafting permit on my first time entering the lottery, I decided to try my luck at lotteries elsewhere in the world of sport. Next up? The New York City Marathon.

According to the race organizer, New York Road Runners (NYRR), the odds of winning an entry to the New York City Marathon in 2020 was 2.3%. Not impossible odds, but not particularly good by any measure.

Lastly, you can run a qualifying time in another race. What's the qualifying time? It depends on your age and sex, and I have no idea what mine is because I will (probably) never run anything close to it (it's fast).

But more relative to my current situation, I don't know because I won a spot via the lottery.

The New York City Marathon will be my second marathon. My first will be the Rio de Janeiro Marathon five months beforehand. Unlike the Rio Marathon, I feel as though I have enough time between now and New York to properly train for the distance.

That said, the complication is that I have my first 100-Mile Race one month before the New York Marathon. Today, on a rest day, sitting here comfortably typing this, I can confidently say a month will be plenty of time to recover before New York. Whether this proves to be the case, we'll find out.

The 100-mile race is my priority – I decided to run it before I entered either the Rio de Janeiro or the New York Marathon. I will be devoting my training largely to extended periods of time running at slower speeds instead of training to increase my marathon speed. My (probably far-too-ambitious) goal for the Rio de Janeiro Marathon is four hours. If I miss my target, I feel that it would be possible (more likely) in New York.

However, if I break four hours in Rio, then my new goal time becomes 3.5 hours. Because that's how it works, right? You just arbitrarily drop 30 minutes from each goal time until you break three hours and then you switch to increments of 15 minutes?

Either way, New York will be interesting.

So what am I doing to prepare for New York? Honestly, just continuing to follow my training plan for my 100-mile race. Running a marathon might not prepare you for an ultramarathon, but running an ultramarathon prepares you for a marathon, right? Isn't that how it works?

At the very least, I should be ready to at least complete the New York Marathon. I haven't thought much about not being able to complete the Rio Marathon (the cutoff is six hours), but I guess if I keep signing up for these races a DNF (Did Not Finish) is something I can continue to look forward to.

The real question I have is whether I should continue using my HOKA ONE ONE Speedgoats (a trail running shoe) when running on roads or if I should get a pair of road-running shoes like the Bondis (they even have these in EEEE – i.e. extra-wide, i.e. my foot). A shoe is a shoe, so long as it's comfortable, right? Probably not? All trail shoes are road shoes but not all road shoes are trail shoes? Is that how it works? 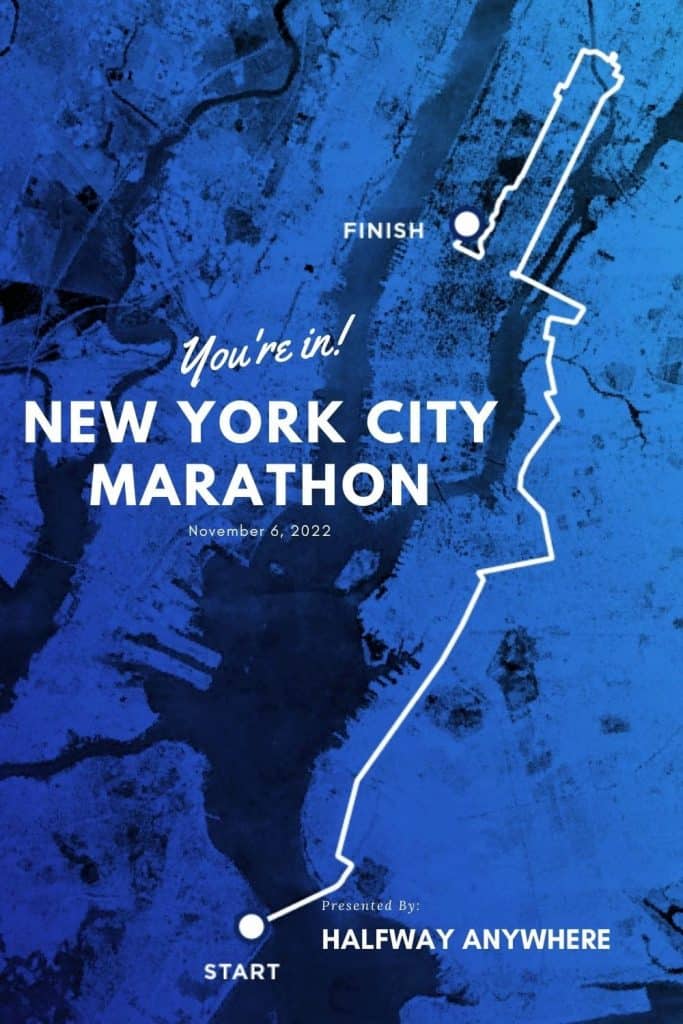 I ran my first marathon six weeks before I turned 70. Trained five months, following a program out of Oregon. Finished in a little over six hours. Not sore, not exhausted–the training did it. Based on research (and read Born to Run), wore shoes as close to barefoot as I could get (Vivo Barefoot). No blisters or foot problems at all. Best of luck to you–though you don’t seem to need any help in that department.