The Great Himalaya Trail (GHT) is a proposed route stretching the length of the Himalayas through Pakistan, India, Nepal, Bhutan, and Tibet. The GHT's western terminus in Nanga Parbat (Pakistan) and the eastern terminus in Namche Barwa (Tibet).

This year, I've committed to devoting much of my time to running. Training has meant I'm not spending extended periods in the wilderness. Naturally, this has given me more time to think about spending extended periods in the wilderness. For the past couple of years, I've had my sights set on the Hayduke Trail (an 812 mi / 1,307 km backpacking route across Utah and Northern Arizona), but then I happened to see footage from Nepal in a documentary I had on in the background one day.

Since then, I've been stoked about getting back to Nepal. A traverse of the entire country seems like just the thing to take my mind off it for a while (or perhaps commit my mind to it for the rest of my life).

Since beginning to dabble with the idea of hiking the Great Himalaya Trail, a few things have stood out as the major considerations of the trek – namely, the technical passes, the weather, the resupply, and the permits.

The latter two, permits and resupply, I'm sure can be managed with a bit more digging and information gathering. I'm already familiar with most of the areas I'll need permits for to complete the trek and know that obtaining them is simply a matter of timing, money, and having enough passport-sized photos of yourself (if you ever get a permit in Nepal, you'll understand).

More on permits and resupply in a future post.

Weather is something I know I can't dwell on. Every year, people come to me with questions regarding the weather conditions on trails such as the Pacific Crest Trail and the Continental Divide Trail. When will the snow melt? How hot will the desert be? Will the passes be passable in X month? When should I start from X location?

The answer is the same every year and for everyone – I don't know, nobody knows, you have to wait and see.

Now, I need to remain patient with my own questions of weather while I wait to see how things shape up in Nepal. One thing I'm certain of is that I want to avoid trekking during the monsoon – generally beginning to ramp up sometime in May and fade out getting closer to October. The monsoon brings rain, mud, leeches, storms, the absence of views, humidity, and largely what I consider to be miserable trekking conditions.

Ideally, I would begin the Great Himalaya Trail at the tail end of winter – early February even – and then finish with plenty of time to spare before the monsoon arrives. The west of Nepal is drier than the east, so if the monsoon decides to arrive early, it will hopefully spare me its worst.

I've done most of my trekking in Nepal in the winter (December and January) and have been lucky as far as the weather goes – crossing numerous 5,000+ m passes (16,400 ft) over multiple weeks with only two days of snow on the books.

Another hurdle? The five technical passes on the Great Himalaya Trail High Route. These are Sherpani Col, West Col, Amphu Labtsa, Tashi Labsta, and Tillman Pass. My precursory research points to Tillman Pass potentially not being as consequential as the other four. That said, the other four passes are indeed technical.

What does technical mean? It means the pass generally requires using a rope (and other equipment in the “mountaineering” category, not the “hiking/trekking” category).

As of now, I have experience climbing and rappelling. I have even more experience without a rope on terrain that would probably be considered on the lower end of ropeable. From the looks of it, the majority of the technical bits involve rappelling on the way down from the passes. The climbs up appear to be more navigationally challenging (although I have seen plenty of people using fixed ropes on the climbs).

I have time to prepare myself for these conditions, but I may end up hiring a guide to accompany me across Sherpani Col, West Col, and Amphu Labtsa (they're one after another) – possibly Tashi Labsta as well. If I end up hiking solo for the easternmost section of the GHT, it would probably be wise to hire a guide regardless of my experience level – even if I feel prepared enough to cross these passes.

I would love to hike the Great Himalaya Trail. I have been to Nepal numerous times, trekked alone, trekked in winter, and trekked above 6,000 m (19,600 ft), so I feel relatively comfortable with the idea of a solo hike across the country. Is my faith in myself and my abilities misplaced? I hope not.

That said, there's still the issue of the weather and the technical passes.

I'll continue my research and continue to speculate on my prospects of hiking the GHT in its entirety. As of now, I will be slowly preparing for it between my runs.

If any of you have hiked any sections of the GHT – especially if you've crossed any of the aforementioned passes – I would love to hear from you! 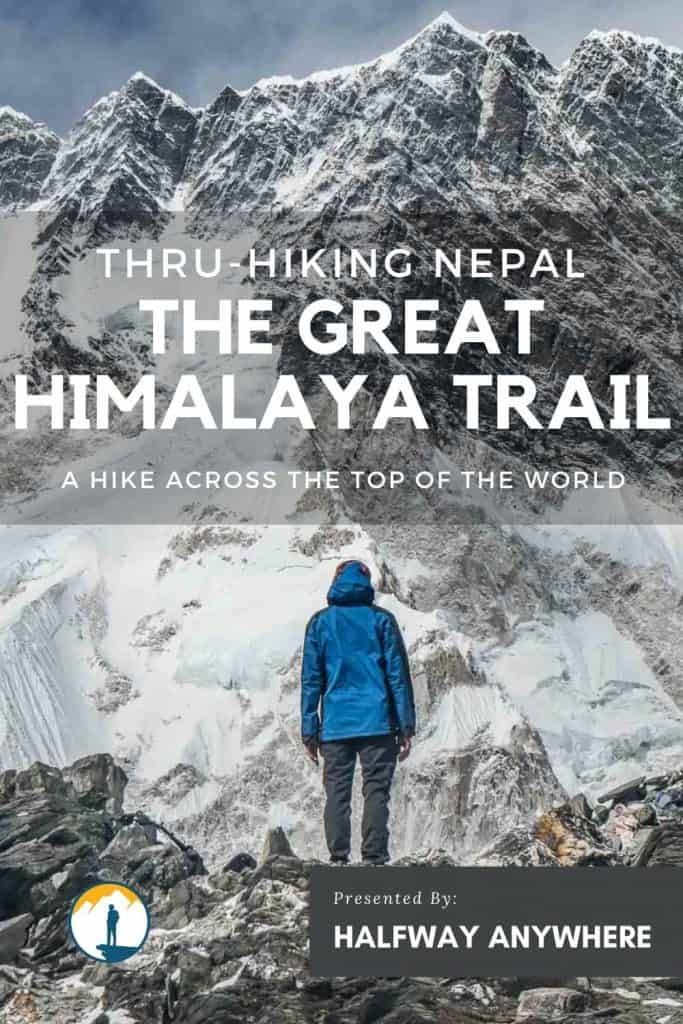