I’m two weeks away from my first 100-mile race (160 km) – past the point of being able to do much as far as training is concerned.

Ultramarathons – or standard marathons, or any amount of running – are not anything I ever anticipated having any interest in. While it’s true many people enter the ultrarunning community following thru-hikes, moving quicker than “hiking speed” was never of much interest to me. This, despite my having learned a lot of ultramarathons consist of many “hiking speed” sections.

It was eight months ago I signed up for this race and I didn’t know what to expect when I started my training. The advice many ultrarunners had for me boiled down to two things – run a lot and don’t get injured. I’ve attempted to abide by both – although COVID took me out for a week and I’ve been plagued by an injury the past two weeks – and I feel that I was consistent with my training.

But I don’t feel entitled to speak on anything until the race is over. That is if it even starts.

I opted to sign up for Go Beyond Racing’s Mountain Lakes 100 because the course appeared to be well-suited for a first-time 100: plenty of aid stations, gradual climbs, relatively low overall elevation change, and a late start date (to hopefully avoid the summer heat).

However, it’s this final reason – the late start date – that may end up being the crux of this event.

It appears I can hope for reasonably comfortable temperatures on race day, but the concern now is no longer the heat but the air quality. With longer and more aggressive fire seasons plaguing the Western United states, the air quality index (AQI) around the course has been undesirable, to put it gently.

No fires are actively threatening the course itself, but fires are burning to the north, east, south, and west. As I write this, AQI is hovering around 150 – the threshold of “Unhealthy for Sensitive Groups” and “Unhealthy”. For reference, below 50 is generally considered good and 50-100 is “Moderate” where sensitive groups may experience some risk. Above 200 we enter “Very Unhealthy” territory where all people may experience health effects with prolonged exposure.

I’ve preemptively started to scope out other 100-mile races around the country (ideally soon) should Mountain Lakes get canceled. There’s one in Colorado the following week that will surely destroy me (not to say that Mountain Lakes won’t) with its climbs and altitude, but better get destroyed than do nothing at all.

On a related note, if you’re not already familiar, I suggest using Purple Air to check real-time air quality.

Assuming the course doesn’t catch fire and the air quality is acceptable, a few more thoughts have been plaguing me concerning race day.

On my 50-mile (80 km) training run, I lathered up my legs and nether regions with Body Glide and managed to keep these regions chafe-free. However, the top half of my body (and my buttcheeks) was a different story. The run left me horribly (and I mean horribly) chafed all over my torso. Hopefully, a more liberal application of lubricant – this time over my entire body – will do the trick.

Another concern is my bowels.

They’ve been relatively well-behaved on my runs – typically angry within the first 10 mi / 16 km, if at all. However, I feel the balance to be struck on the morning of the race (which begins at 8 am) is a delicate one. Ideally, I will wake up early enough to squeeze one out before the race, but I don’t want to wake up so early that I end up too tired toward the end of the run.

Lastly, I am concerned about my lack of food experimentation.

Basically, I didn’t try out enough different foods during training to ensure my body won’t be angry with any of them. At this point, I know I can (hopefully) eat/consume gels, chews, fruit, string cheese, Gatorade, and Mio. I wish I had tried out eating peanut butter and jelly sandwiches during my training. “Nothing new on race day” is a refrain I’ve heard often, and one I’m inclined to agree with. Numerous foods I’ve tried, including Cheerios and M&M’s, send me straight to the toilet (or cathole) should I eat them pre or mid-run.

Ultimately, as with most things, I’ll just have to wait and see what becomes of the race and myself. Regardless of what happens, it will (hopefully) prove interesting. 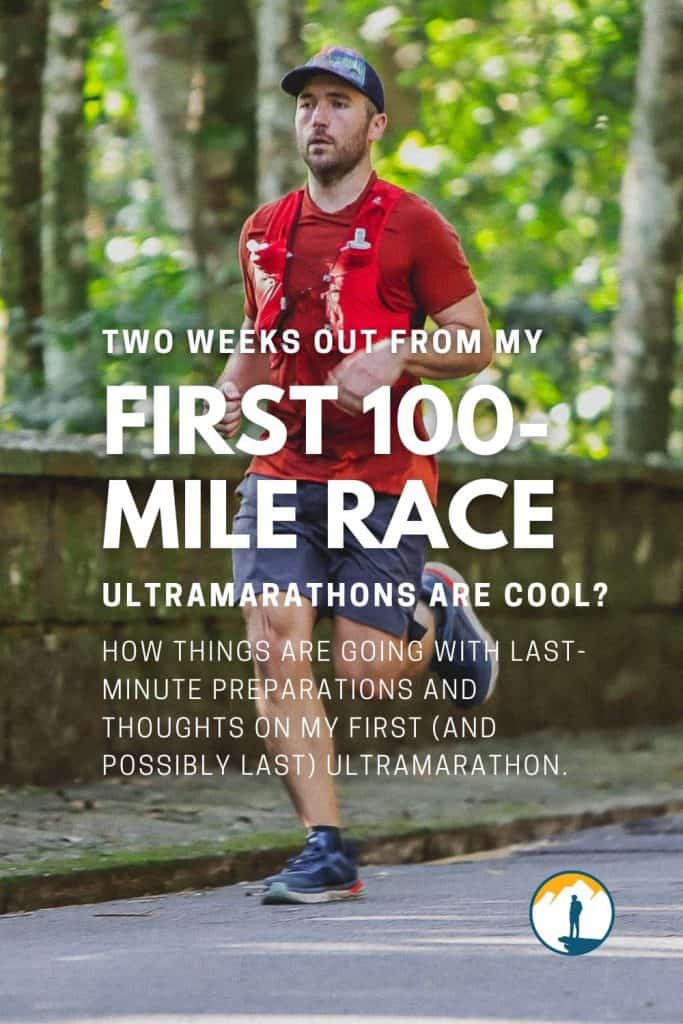