Earlier this year, having never trained for any amount of running in my life, I decided my goal was to run a 100-mile (160 km) ultramarathon.

I chose the Mountain Lakes 100 in Oregon as my first (and, at the time, presumably my last) ultramarathon. It takes place just south of Mount Hood and largely follows the Pacific Crest Trail – an appropriate start to my ultrarunning journey. My reason for choosing this race was I wanted the challenge to be the distance itself, not anything extraneous.

Many races present additional challenges, beyond the distance. You can find races at altitude, in the heat of the summer, with a ton of climbing, or on incredibly technical terrain. Mountain Lakes minimized all these concerns and would allow me to focus on completing the race – a tall enough order for a first-time ultra.

The race was my singular goal for the year and I dedicated myself to training as best I could. I’ve never considered myself a runner and I didn’t expect the 100-mile distance to be a particularly easy first goal. That said, I had most of the year to prepare for the race at the end of September.

Here’s how it went.

The race began at 8 AM and I stayed in a hotel about 45 minutes away. This meant I woke up at 5:30 to get ready, attempt to force out a poop (it was moderately successful), and drive to the starting line. I had dialed in my gear over the past couple of months and had a relatively new pair of shoes with good tread. Things started well.

Starting the race, the only complication was the chilly morning temperature. I wish I had brought my gloves with me for the start; for the first couple of miles, my hands were freezing. These could have been easily passed off to my crew at the first crew-accessible aid station.

I knew the energy and excitement of the start of the race would be a big motivating factor at the start and so I did my best to pace myself. For the first 5 mi / 8 km I ran with a friend (Appa). But he quickly outpaced me and by mile 10 (km 16) I was on my own. That said, I was never really alone because the first 30 mi / 48 km were an out-and-back from the starting line so you passed everyone else on the course here at some point.

My goal was to finish in under 24 hours and I managed to run a sub-24-hour pace for the first 26 mi / 42 km. Then things began to slow down a bit as my legs started to feel the climbing.

I probably should have worn gaiters but I was doing my best to adhere strictly to the “nothing new on race day” rule. There were multiple times my shoes filled with debris – rocks, sticks, dirt, etc. Each time, I was somehow able to work out I would be able to knock everything to the front of my shoe and get it all to fall under my insole and leave me alone.

Then, I would remember there were still many, many more hours and miles in front of me. Ultimately, I would end up stopping to empty my shoes. A waste of time and incredibly frustrating.

But the gaiters were the least of my unexpected problems. Food was another issue.

Despite doing my best to experiment with different foods during my training, I could have done a much better job. My food choices for the race consisted mostly of Honey Stinger Gels, Honey Stinger Gummies, PROBAR Bolt Energy Chews, and a couple of Clif Bars. Plenty of food for 50 miles (80 km) or less, but not sufficient for a day’s worth of running.

I wish I had proven to myself beforehand that my stomach could handle a wider variety of foods during a run. It would have been nice to confidently crush those slabs of bacon or quesadillas offered at the aid stations.

The final issue was my toenails.

Over and over again I bashed my big toenails into rocks, roots, and anything else sticking up out of the trail. This wasn’t a big issue at first – just a somewhat painful inconvenience – but it slowly became one of the biggest issues of the run. Yes, my toenails were cut beforehand, but I never cut them too short because they become horribly ingrown otherwise – back to the bashing.

My big toenails got to the point where they were in so much pain I would scream at the top of my lungs every time I hit one of them on something. I apologize to everyone I frightened in the night. They were also in pain when they weren’t hitting things. When I changed socks at mile 67, I forced myself not to look at them for fear it would only make things worse. Eventually, I saw blood soaking through the front of my shoe around my big toe. No way were my toenails surviving this run.

Quitting – or dropping – from the race was never something I seriously considered. I spent nearly the entire year training to complete this race and there was no way I was going to give up before the 30-hour cutoff bar something terrible happening.

However, around mile 35 (kilometer 56) the thought of dropping did manage to creep into my head.

It was the thought, “damn, this is harder than expected, and wouldn’t it be nice to just call it at the next aid station?” But then I thought about how upset with myself I would be in a week if I had dropped because of anything short of a serious injury or complication. Yes, my toenails were incredibly painful, but the pain was bearable. I wasn’t going to let my toenails rob me of a finish.

When I reached the halfway point, things improved mentally. Around 10 mi / 16 km after passing midway, there was another crewed aid station which was hugely motivating. This was also where runners turned around to head back toward the finish after completing the course’s longest out-and-back.

This was the final test I had been working toward all year and no matter how much it hurt, I was going to finish the damn thing.

The other highly motivating factor was the aid stations. The volunteers were incredible and the cheers from each aid station breathed new life into me each time I approached. I don’t know if I would have gotten through the race if it hadn’t been for the aid stations and their amazing crews (or my amazing crew).

Getting to the End

At around 80 mi / 129 km into the course, pacers were permitted to join runners.

One final complication in getting to the end was I eventually needed to answer a call from nature. It started ringing about 10 mi / 16 km out from the finish and I thought I could hold on. However, I soon calculated the time spent digging and pooping in a hole would be negated by the increased comfort and pace allowed by silencing a ringing phone.

In the final 20 mi / 32 km I struggled to maintain a pace quicker than 15-minute miles (9:19 kilometers). But in the final 10 mi / 16 km (post-poop), I managed to dig deep – push past my now-destroyed toenails – and find some speed. My penultimate mile was faster than every mile I had run since mile 37 (kilometer 60) and my final 5 mi / 8 km split was faster than anything accomplished following the first marathon.

I passed a few people toward the end and one started running with me. He said I inspired him to push and we could make it to the finish in under 26 hours if we pushed. After this, there was no way I could slow down.

As I drew toward the finish I could hear cheering and cowbells from my crew and spectators. It was exactly what I needed to finish strong.

On the whole, my first 100-mile ultramarathon was an overwhelming success. Despite thinking my first ultra would be my last, I have to admit I’m inclined to do another.

I’ve entered the lottery for next year’s Western States 100 which I am eligible for after completing the Mountain Lakes 100. If I get into Western States, which takes place in June, I guess I have to remain a runner for a little bit longer.

If not, who knows where I’ll find myself running far and not dying next. 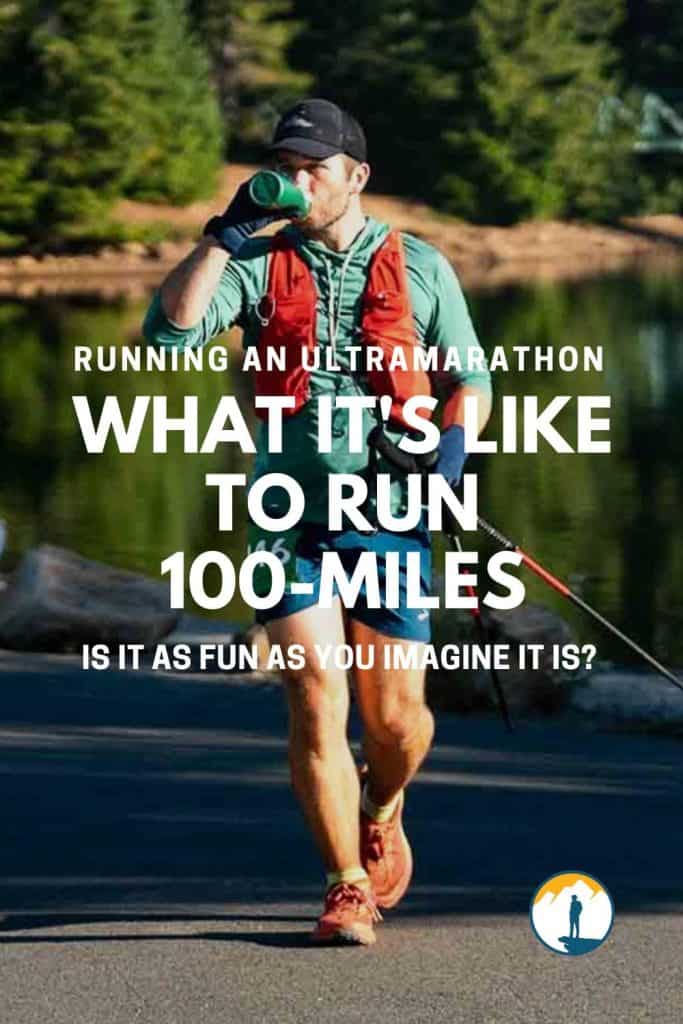 Congratulations! You are so strong!
I can´t run a mile.
(But I can still walk thousans of miles.)

Thank you! I think I still prefer walking, but we’ll see what next year brings.