The PCTA has just posted some shocking news on their blog.

Apparently, some of the people living in our one and only greatest nation that ever was or ever will be have decided that the law does not apply to them. And they are growing marijuana along the Pacific Crest Trail.

The PCTA has taken crucial steps to alert hikers to this threat by designating this announcement under the category of “extreme hazard”.

The efforts and research of local police, the FBI, and the DEA shows that these areas may emit a skunk-like odor, and there may be “people standing along roads without vehicles present”. You should report any suspicious activity to authorities immediately, and know that you are helping to make the world (and the PCT) a better place.

Fortunately you can aid in the fight against illegal marijuana cultivation.

According to the PCTA you should, “[n]ever engage the growers as these are extremely dangerous people.” That's right – extremely dangerous. They are likely carrying AK-47s on patrol with rabid german shepherds just waiting to murder the next innocent passerby. After all, that's what marijuana does to you – it makes you want to kill.

Hopefully I come nowhere near one of these marijuana death farms, but in the unlikely case that I do – you can be assured that I will do no investigating.

Should you come into contact with marijuana, make sure to wash your hands and all other affected areas thoroughly as the plant can be sticky-icky and its scent can linger long after contact. If accidental inhalation occurs seek medical attention IMMEDIATELY – swelling and redness of the eyes may occur accompanied by feelings of euphoria and waves of paranoia.

Help preserve our wilderness and to stop these dangerous drug addicts from overrunning our beloved Pacific Crest Trail. 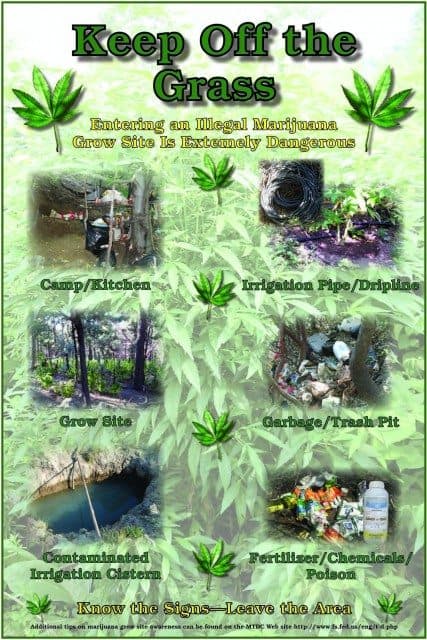 it doesn’t matter what you think about marijuana in general, grow sites are grow sites. Look it up, doesn’t matter which side your coming from when it comes to grows, it is what it is and it does damage, not to mention many of national forest/ BLM grows are cartel(yup guns).

I appreciate the satire but you have to realize the PCTA is government funded and subject to litigation if they do not say anything about the hazard or blow it off.

I understand that the PCTA needs to be sensitive to the laws surrounding marijuana cultivation (legal and otherwise) along the PCT, but since they only receive around 50% of their funding from government grants we can just say that what is written here comes from all the hearts of their private donors.