25 Movies to Watch Before Hiking the Pacific Crest Trail

Sitting around waiting for the start of a Pacific Crest Trail thru-hike can be a boring task (this is why I fill said task with junk food). However, as with everything else in life, there are always movies if you need a good old-fashioned distraction from life (but are they old-fashioned if they're still relatively new in the grand scheme of the universe – as far as we know).

Sure, your time might be better spent actually hiking or training for the trail, but in the case your stuck in an office or you live somewhere where the outdoors simply aren't accessible (Dubai?), then let the hard work of others' transport you there through the majesty of film. And no, the movie Wild is not on this list – I am not a fan of this movie for various reasons. If you want a generic and unoriginal list of thru-hiking movies, there are plenty of copy-paste examples out there on the internets for you to check out.

As always, if you would like to tell me that I'm wrong (or that you love me), there is a spot for your comments at the bottom of this post (and if you can recommend some other films – and I like them – then I'll put them on the list).

Yosemite is probably the most well-known place on the PCT and there's no better movie than Valley Uprising to teach you about the legendary dirtbags and climbing legends who made the park their home. Climbers and thru-hikers are often cut from the same cloth and despite climbers sometimes being more badass (see movies below), I think we can all be friends.

The Barkley Marathons: The Race That Eats Its Young

A lot of people get into ultra-running after a thru-hike (which I guess could be described as ultra-walking), and the Barkley Marathon is one of the toughest races around – in its first 25 years, just 10 people completed the course. So yeah, if you think you're cool after hiking the PCT, here's some next-level shit for you.

I still imagine Paul Smecker every time I hear Willem Dafoe's voice, but that doesn't bother me one bit when listening to him narrate this documentary about some of the highest and most epic places in the world. If you want fantastic footage from mountains all over the world to pump you up for hiking the Pacific Crest Trail, then Mountain is a good bet (it's even set to music).

A movie that should need no introduction, The Lord of the Rings is one of the most epic tales of adventure ever told. If you're worried about getting yourself the “best” (and probably most expensive) gear, then just look at what Frodo and Sam have on their mission to save the world from evil. “Don’t adventures ever have an end? I suppose not.”

A story about a man (Martin Sheen) who decides to hike the Camino de Santiago, The Way actually does a great job at showing how quickly social bonds can form on the trail between people from all walks of life (get it, walks?). The style of hiking on the Camino (aka walking) is not on par with that of the PCT, but it's a solid movie nonetheless.

Remember when I said that climbers are cooler than thru-hikers? If you had any doubts, then look no further than Alex Honnold. This Academy Award-winning film shows what's humanly possible with the right mix of determination and discipline. You can't not want to set off on a grand adventure like the Pacific Crest Trail after watching this epic film (make sure to watch on a large screen).

Meru documents the first ascent of the “Shark's Fin” route on Meru Peak in the Indian Himalayas. There are a lot of climbing movies on this list, huh? Yeah, because movies about climbing mountains are often more entertaining than people simply walking (i.e. the PCT). But don't hate, this list is all about inspiration and the great outdoors.

The PCT is a much more community-driven experience than it used to be, but that doesn't mean you won't have plenty of time to yourself. And sometimes being alone in the world can be just as great an adventure as hiking the PCT. Tom Hanks in Cast Away also does a great job of representing what thru-hikers can expect to look like that the end of their hikes – hairy and emaciated.

The only film shared with my CDT Movie List, Backcountry will stoke the flames of your irrational fear that a blood-thirsty bear is going to savagely murder you in the middle of the night. If the fact you might get lost and subsequently eaten by animals wakes up nightly in cold sweats, then Backcountry will definitely put your mind at ease. It's definitely not about any of that (except it is).

K2: Siren of the Himalayas

From the trailer (and the film), “The will to try something big, something dangerous, something extraordinary – it's part of who we are.” Tell me that's not a great description for someone thru-hiking the PCT. This film documents an expedition to the summit of K2 (the second tallest mountain in the world) – one of the deadliest mountains in the world.

What's a list of movies without some western-style gun slinging? Django Unchained, a story of revenge in nineteenth-century America by Quentin Tarantino, has filming locations in the towns of both Lone Pine and Independence – two Eastern Sierra resupply towns along the PCT (this includes the Alabama Hills west of Lone Pine below Mount Whitney).

If you think 700 mi / 1,126 km of Southern California desert is going to be a challenge, then try 1,700 mi / 2,736 km of Australian Outback for size. That's exactly what Robyn Davidson (Mia Wasikowska) decides to do in the movie Tracks. Why? Because why not? Plus, you get to watch Kylo Ren bro out in Australia before he turns to the dark side.

Mile…Mile & a Half is a documentary focused on hiking the John Muir Trail (JMT). The JMT is often thought of as one of the highlights of the Pacific Crest Trail and I can personally attest to its awesomeness. Sure, JMT hikers may be the arch nemeses of PCT thru-hikers, but we can all agree that the JMT is great and this film will show just that.

180° South: Conquerors of the Useless

180° South is a documentary about lots of things, but it's centered on Jeff Johnson retracing the 1968 journey of Yvon Chouinard and Doug Tompkins in Patagonia. It can seem all over the place, but that just means it's got something for everyone – boats, mountains, politics, surfing, horses, and inspiring quotes about the world and how we can make it a better place.

What can I say? Firsts and Yosemite are a theme in this list. But honestly, what could be better to get you pumped for the trail and watching people challenge themselves to do the impossible in one of the most beautiful places on Earth (and a place that you, future hiker of the PCT, will one day be standing – or so we hope). Tommy Caldwell is a badass.

The Way Back tells the true-inspired story of a group of prisoners in Siberia who make a run for it across 4,000 mi / 6,437 km to India. It's got everything the PCT has: desert, mountains, forests, snow, mismatched companions, blood-thirsty wolves and big black poisonous chickens with no legs. Okay, the PCT has most of these things (definitely the wolves).

Karl Meltzer: Made to Be Broken

Remember earlier in this list when we talked about ultra-running? Well, what's more ultra than running a thru-hike? That's what Karl Meltzer does on the Appalachian Trail (AT) in this film documenting his mission to break the trail's speed record. Your thru-hike will likely be nothing like Karl's, but ultra-runners and thru-hikers are related species.

Tell it on the Mountain

What's this? A feature-length documentary focused exclusively on the Pacific Crest Trail. Yes, my friends, that's exactly what Tell it on the Mountain is. If you're sick of people telling you to read books about the trail because you would rather watch a movie while you get fat pre-trail, then this is the hiker-trash-laden film for you. Sit back and get excited about the PCT.

Did you know that the exterior shots of the hotel in The Shining are from Timberline Lodge on Mount Hood in Oregon? Do you know what passes by Timberline Lodge on Mount Hood in Oregon? Yes, the PCT. And so The Shining has earned a spot on this list. As a bonus, this movie also teaches you an important lesson about getting caught out in the cold unprepared.

Samsara won't be for everyone – but this dialogue-free documentary, shot over five years in twenty-five countries on five continents on seventy-millimeter film, beautifully displays some of the most epic places in the world including scenes from (yet again) Yosemite National Park and the Eastern-Sierra town of Bishop (a nice place to go and resupply from the PCT).

Monty Python and the Holy Grail

We need at least one 80's comedy to make sure we've got a well-rounded list, right? In the case you've yet to spend much time in the backcountry, let John Candy and Dan Aykroyd remind you what most people do when they “go camping” or visit a national park (I'll give you one guess which national park is used in this movie). Remember to be nice to the day hikers.

In 1985, two climbers set out to tackle unclimbed Siula Grande in the Peruvian Andes. This docudrama details their expedition and shows what the human body (and spirit) are capable of. If you are fearing for your life on the Pacific Crest Trail, all you need to do is watch this film to remind yourself that things could probably be a lot worse than you're imagining.

Did you really think I would end this list without including Into The Wild? Not only is the Pacific Crest Trail mentioned by name in this movie, but it was filmed at many locations along the PCT including the Anza-Borrego Desert, Mount Hood, and Sisters. The story of Christopher McCandless in Into The Wild is one that really resonates with me having hiked the PCT.

So what do we think? Have any movies that you think should be added? Un-added? Leave a comment and let me know. 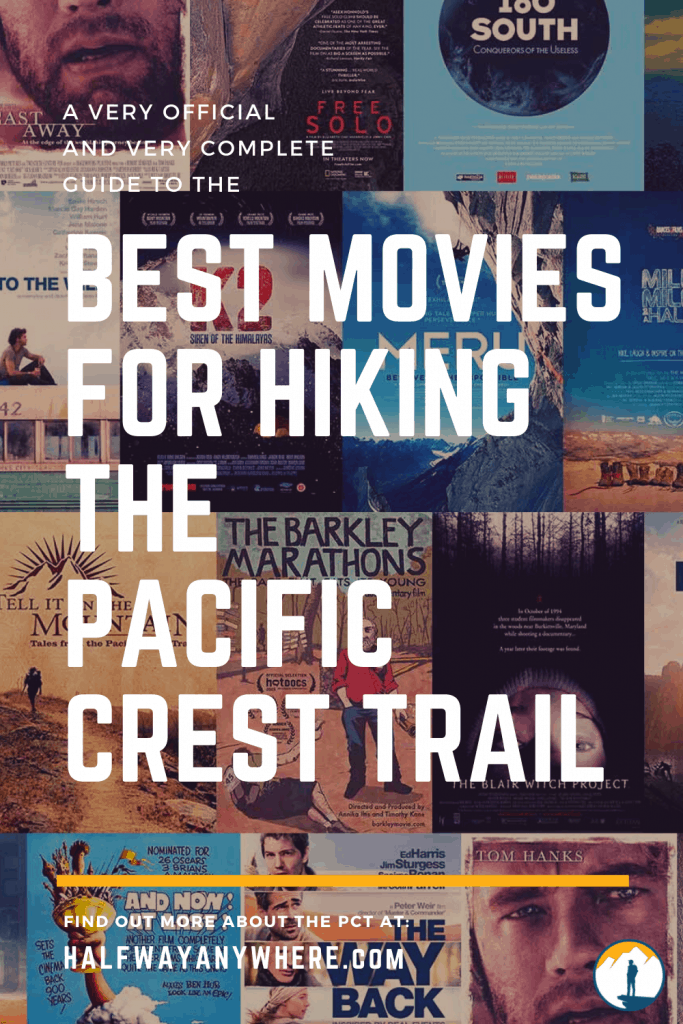 You missed The Edge, with that baldwin guy and Anthony Hopkins jr.

I’m going to have to give that a watch.

Well done list! I’m hiking the PCT next year and have seen most of the movies. Into the Wild, Valley Uprising, Free Solo, and the Dawn Wall are some of my personal faves. And the Barkley Marathons is straight up nuts!

The Holy Grail is a given! I’ve seen it 100 times and can recite it by memory.

Thanks for sharing the list. I know I can trust your judgment because you passed the most important test for any film critic: You correctly identified the greatest Christmas movie of all time. 🙂

Happy to see I’m not alone in this regard.

But.. I’ve already watched Backcountry as my preparation for the CDT…

It’s the only shared film between the lists. Why? Because bears don’t care which trail you’re hiking. They’ll savagely murder you no matter where you are.