The Mount Laguna Outfitter And “Getting Daved”

This early stop can be a monetary disaster for a hiker with insecurities in their gear.

Dave will gladly go through your pack, suggesting replacements, and even mail home the gear you replace. I’ve seen hikers with a decent set of gear get talked into spending thousands to shed a few pounds off their base weight.

While this might be fine for some, many hikers are on a budget and let their fears culminate into spending their trail money.

The bottom line, Dave is a brilliant businessman in a great location with an impressive selection of gear. If you need something specific, they have it, no doubt. Remember that in most cases your gear is fine, you just have too much.

My personal experience there is quite telling. In 2013, I was in a storm on Mt. Laguna, and walked into the store to get some gloves (I had none). Dave was busy taking apart the packs of an Australian duo of hikers (aka getting “Daved”) and I waited for a break to ask him about gloves. He meticulously took me through his selection ranging from $25-$75.

“Man, I’m really just looking for something cheap to get me through this storm.”

“Well, these are the only ones that will get you to Canada.” Then he went back to the Aussies.

I shuffled around a bit and noticed a box in the corner with a little cloth poking out. I pulled at it and a beautiful wool glove appeared.

“Hey Dave, how much are these?”

“I only sell those to tourists to play in the snow. They are five bucks.”

So I laid six on the table and got out of there. The Aussies each spent over a grand there, and got off trail less than a week later.

The same wool gloves got me through the storm, then to Canada, and they are still in my bag. 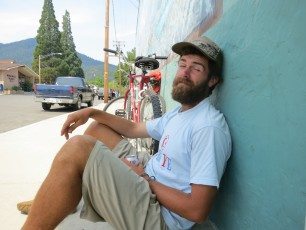