How to Hike the PCT Without a Bear Canister

On a recent trip to Sequoia National Park, I noticed a paper taped to the wall at the backcountry permit office. Specifically, this piece of paper. I asked the ranger, “I was under the impression you were required to have a bear canister everywhere in Sequoia and Kings Canyon National Parks, but according to this piece of paper, you are only required to have one in these highlighted areas?”

He informed me that the paper was correct and that a bear canister was only required in the areas highlighted on the map. This got me thinking about the Pacific Crest Trail and whether the “Kennedy Meadows to Sonora Pass” PCT rule was not entirely accurate. More on where bear canisters are required on the PCT here.

Now before you get too excited, know this article borders on theoretical and is not intended as an invitation for Pacific Crest Trail hikers to not carry bear canisters. You should carry a bear canister; I always do in the Sierra. Bear canisters are not for you, they’re for the bears (which are oftentimes relocated or even killed if they end up getting into delicious people food).

That said, let’s explore what a bear canister-less thru-hike would look like.

According to phone calls I’ve made to the Kern River Ranger District, there are no food storage requirements for the portion of the South Sierra Wilderness managed by Sequoia National Forest. I also cannot find it explicitly stated anywhere online that Sequoia National Forest requires specific methods of food storage in the South Sierra Wilderness. If you want to reach out yourself, their number is +1 (760) 376-3781 (at the time of publication).

During these 11 mi / 17.7 km, hikers are in the South Sierra Wilderness managed by Sequoia National Forest and may legally camp without a bear canister and without hanging their food. The distance from where hikers reenter Inyo to Horseshoe Meadow via Mulky Pass is just under 30 mi / 48.3 km.

Horseshoe Meadow is one of the first places hikers (typically) opt to exit the Sierra north of Kennedy Meadows to resupply. Note that it is off-trail, so you will do some non-trail miles to reach it (and will have to climb back up to the PCT from it). There is a paved road leading up to Horseshoe Meadow and it is a popular trailhead during the summer months (when the road is open). There are multiple campgrounds at Horseshoe Meadow, along with plenty of bear boxes (where you can legally store your food whilst camping), and toilets.

To summarize, if you camp just south of the Inyo boundary at the South Fork Kern River and then hike 30 mi / 48.3 km the following day, you won’t have to start carrying a bear canister until Lone Pine (the closest town to Horseshoe Meadow).

Note: You can also exit the PCT to Horseshoe Meadow via Trail Pass and Cottonwood Pass if you want to make it a bit further up the trail before heading down.

The first bear box located on the PCT (northbound from Horseshoe Meadow) is located at Rock Creek. The shortest way here is via Cottonwood Pass (13.5 mi / 21.7 km); if you exited Mulky Pass and want to rejoin the PCT where you left it, you’ll add 3.7 mi / 6 km to the trip – 17.2 mi / 27.7 km total. That said, this bear box falls within an area designated as requiring bear canisters (the Rock Creek Drainage), so I’m not sure that storing your food in the bear box here would exempt you from this.

If you would prefer to use a bear box somewhere not within a “bear canister required” area, then you’ll have to make your way to Lower Crabtree Meadow (where hikers turn off to hike up Mount Whitney). From Horseshoe Meadow to Lower Crabtree Meadow via Cottonwood Pass is 19.4 mi / 31.2 km. Again, add 3.7 mi / 6 km to the trip if rejoining the PCT at Mulkey Pass.

North of Crabtree Meadow things again become tricky as you enter another “Park-allowed Portable Food Storage Container Required” area between Forester Pass and Pinchot Pass (northbound Guthook miles 779.5 to 807.1). That said, if you’re willing to put in another big day, you can hike just under 30 mi / 48.3 km via Forester Pass and Kearsarge Pass to Onion Valley Trailhead where there are bear boxes you can use (or you can hitchhike to town). There is a paved road leading to Onion Valley. This is where hikers make their way down to Independence (the closest town) to Bishop via Highway 395 (a much larger town with far more amenities).

Leaving Onion Valley, our thought experiment breaks as there are no backcountry bear boxes available north of the “bear canister required” area you’ll pass through between Kearsarge Pass and Pinchot Pass. So, to be safe, I would say that Independence (or Bishop) via Onion Valley is the latest you should pick up your bear canister (assuming you’ve followed the instructions laid out here).

North of here on the PCT you won’t encounter any more “bear canister required” areas during your time in SEKI. Technically, you’re allowed to hang your food along the PCT in the area. However, as noted in my PCT bear canister requirements article, SEKI states:

It’s a common misperception that the counter-balance method is a good way to protect food from bears. However, because bears are so adaptable, many have learned to obtain counter-balanced food. This method generally does not work in these parks. Only use this option if the others are not available.

Hikers again enter a bear canister requirement zone between Crater Creek (south) and Donohue Pass (north); between northbound Guthook miles 902.6 and 929.6. However, north of Donohue Pass hikers enter Yosemite National Park where bear canisters are required everywhere, with no exceptions. So, canisters are ostensibly required for the 94.5 mi / 152.1 km between Crater Creek and the northern boundary of Yosemite (northbound Guthook miles 997.1).

The last place to get a bear canister before beginning this section of trail is either Red’s Meadow or Mammoth Lakes. That said, if you really wanted to, you could hike from Red’s Meadow, Devil’s Postpile, or Agnew Meadows (all located adjacent to the PCT on Minaret Summit Road/Postpile Road) to the town of June Lake (east of Thousand Island Lake) in a single day before picking up your bear canister there (the post office is ~3 mi / 5 km from the trailhead in June Lake).

As stated above, bear canisters are required for the entirety of Yosemite National Park. There are only two places where bear boxes can be found on the Pacific Crest Trail in Yosemite, Tuolumne Campground and Glen Aulin.

Presumably, if you have (for some reason) decided to hike from Mammoth Lakes to June Lake in a single day, you could then hike from June Lake to Tuolumne in a single day. This would allow you to use the bear boxes at Tuolumne Campground (at the hiker/biker site) before either picking up your bear canister at the Tuolumne Post Office or hitching/getting a ride into Lee Vining to get your bear canister there.

The northern boundary of Yosemite on the PCT is Dorothy Lake Pass, 54.6 mi / 87.9 km north of the Tuolumne Campground. Is it physically possible to complete a double-marathon day across difficult terrain? Sure. Could most PCT hikers do it? Probably (absolutely) not.

If by chance you are super committed to (legally) not carrying a bear canister on the PCT and you’ve made yourself a reservation at the Glen Aulin High Sierra Camp, you can use the bear boxes there. However, this shaves a relatively small distance and you’ll still need to complete a 48.8 mi / 78.5 km day to make it out of the park after leaving Glen Aulin.

So, is it possible to hike through Yosemite without a bear canister? Yes. Is it probable? No. Also, good luck convincing a ranger that you’re going to be hiking a 50-mile day to make it out of the park.

In 2016, Lassen Volcanic National Park also began requiring bear canisters for anyone spending the night (outdoors) in the park. However, the Pacific Crest Trail is only within the bounds of Lassen for around 20 mi / 32 km (northbound Guthook miles 1344.8 to 1364.1).

So, if you can hike a 20 mi / 32 km day by the time you’re in Northern California (if this sounds impossible to you right now, I’m confident your mind will have changed by the time you make it here), then you don’t need to carry a bear canister in Lassen.

However, if 20 mi / 32 km is still too much for you (or you didn’t time your arrival properly), Warner Valley is a developed campground three miles (5 km) north of where the PCT crosses the park’s southern boundary. There are bear boxes here for food storage. If you plan on staying here, it would be wise to get a reservation, but there are also 9 first-come, first-served sites. The safest play (if you don’t get a reservation) is to just hike through the park in a single day.

Unlike elsewhere on the PCT, the Ursack Major and Ursack AllMitey are approved for use in Lassen.

The following is a list of all the bear canisters approved for use on and along the Pacific Crest Trail. This list is subject to change. Here is the most current (although obviously outdated) list of approved containers for SEKI and Yosemite. As far as I can tell, Inyo National Forest does not provide a list of approved containers (but it’s probably safe to assume that anything good enough for SEKI or Yosemite will have you covered in Inyo as well).

Ultimately, you will have to carry a bear canister in Yosemite (unless you are truly a beast; but even if you are, I’m not sure you’ll be able to convince a ranger of this). Like I said above, this is more an exploration of what is theoretically possible more than it is a guide to what you should do regarding Pacific Crest Trail food storage. Do yourself (and the bears) a favor, and carry a bear canister.

If you have any comments, suggestions, observations, or updated information regarding the information contained within this article, I would love to hear from you – drop a comment below. 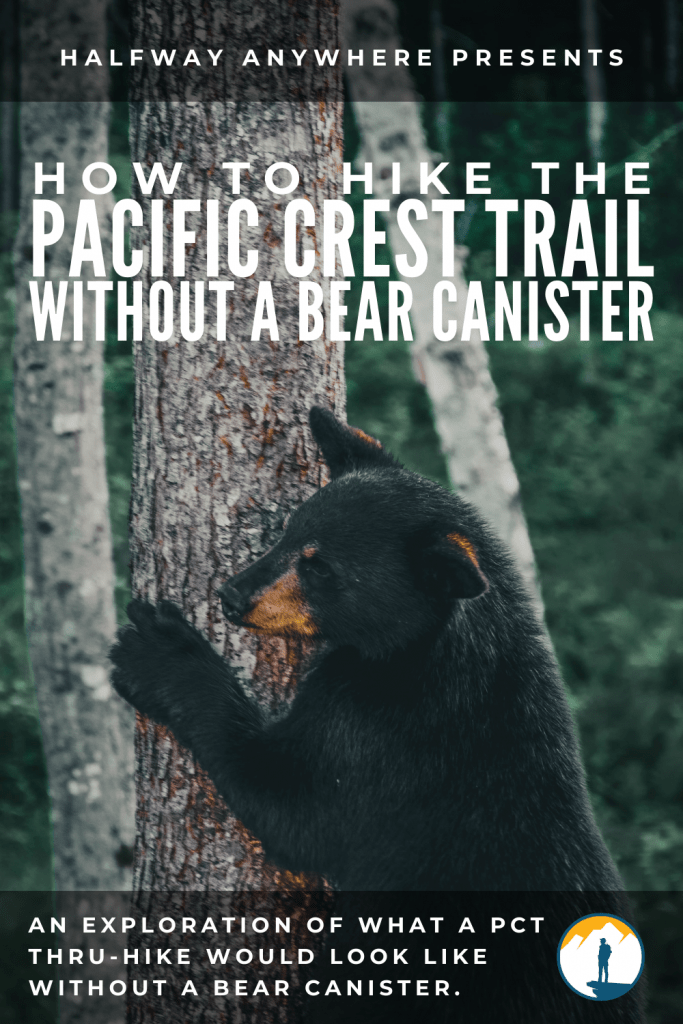