It’s located just 9.8 mi / 15.77 km south of Mather Pass. The vertical drop between the two (2,054 ft / 626 m down from Pinchot and 2,041 ft / 622 m down from Mather to the South Fork Kings River) represents the smallest elevation change between the major passes on the Pacific Crest Trail/John Muir Trail (if you’re looking at the above graphic thinking “What about Island Pass and Donahue Pass?”, trust me, Island Pass is barely noticeable).

The well-maintained trail leading over the pass is easy to follow in snow-free conditions. I’ve been over in both snow-covered and dry conditions – here’s what you can expect in each.

Pinchot Pass: The South Side

The approach to Pinchot Pass starts at what I call “the bridge” but that might more accurately be referred to as the Woods Creek Suspension Bridge (since it’s a suspension bridge that goes over Woods Creek).

This bridge can be reached via the Pacific Crest Trail/John Muir Trail by way of Glen Pass and Rae Lakes or via the Paradise Valley Trail leading to Roads End in Kings Canyon National Park. The bridge, which, apart from the trails themselves, is perhaps the most sophisticated piece of infrastructure I’ve come across in the Sierra.

Don’t forget, only one hiker at a time on the bridge (and save your photos for when there’s nobody else waiting to cross).

The trail climbs gradually up from the bridge with a couple of sections of switchbacks, steeply gaining elevation, along the way.

About 2 mi / 3.2 km up the trail, you’ll pass the Sawmill Pass Trail – an unmaintained trail leading east out of the Sierra via Sawmill Pass. Continuing past Twin Lakes, you may think that you can see Pinchot Pass, but you’re not in view of Pinchot Pass until you take a turn northwest and up a small climb.

The trail heads to the left (south) of Pinchot before then traversing over and switchbacking a bit before continuing the traverse and reaching the top.

Pinchot Pass: The North Side

To the north of Pinchot Pass is tame compared to the typically-steeper northern slopes other PCT/JMT passes. It’s a pleasant walk down in dry conditions and is definitely easier than the southern side if you happen to be crossing in the snow.

You shouldn’t need any snow gear (except maybe snowshoes depending on the snow conditions) to reach the flats below and your greatest challenge (in a high snow year) will probably be the descent to and crossing of the South Fork Kings River 4.2 mi / 6.76 km ahead (note: if continuing to Mather Pass, it’s possible to stay east of the South Fork until further up the valley where it’s easier to cross – or to cross early if coming south from Mather toward Pinchot).

There’s plenty of camping to be found on the way down, but if there’s lots of snow you may need to wait until you’re down to South Fork before you find a good place to rest your head.

Pinchot Pass in the Snow

Pinchot Pass in the snow isn’t as scary as Glen Pass to the south or Mather Pass to the north.

Whether you’re coming from the south or the north, the approach to Pinchot is gradual and shouldn’t pose too great a challenge – even in the snow. The trickiest bit is the southern side, just below the pass.

You will (probably) approach the pass from the left and then need to complete a short snowy traverse. If you’ve come to Pinchot by way of the PCT or JMT, this section of trail should not prove more challenging than anything else you’ve conquered thus far.

That said, you should still use caution when ascending (or descending) the southern side of Pinchot Pass.

The northern side isn’t even steep enough to glissade down and you shouldn’t have any trouble navigating this terrain.

The route in the snow ended up being 1.1 mi / 1.77 km shorter. It really is a choose your own adventure game out there in the snow.

Crossing Pinchot Pass in the snow involved a long traverse which became fairly steep toward the top. I didn’t use my Kahtoola MICROspikes or Black Diamond Raven Pro Ice Axe for any part of it, but it probably wouldn’t have been a bad idea for me to have taken the two minutes it would have required to equip both.

If you’re interested in what snow gear Pacific Crest Trail hikers liked best during last year’s thru-hike, you can find out more on my PCT Gear Survey.

That’s not to say that it’s not beautiful, but neither the north nor the south side of Pinchot is home to any truly remarkable scenery (although I am sure there are plenty of people out there who will read this as heresy).

Any questions, comments, or concerns about Pinchot Pass? Leave a comment below or get in touch and let me know! 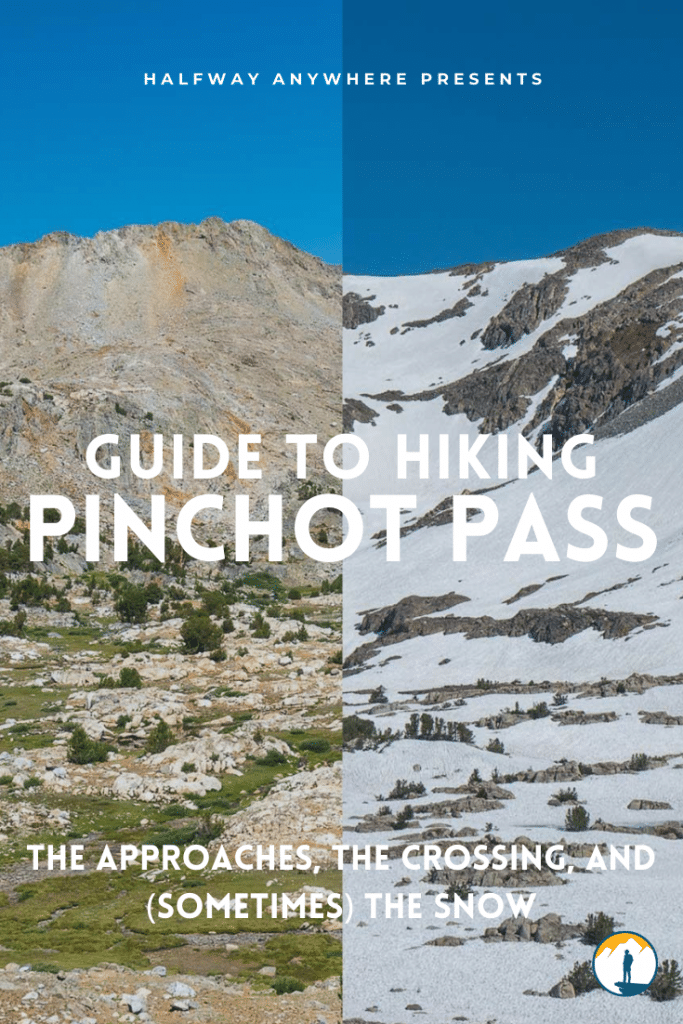