Despite it not being as high as the 13,153 ft / 4,009 m Forester Pass (three passes to the south along the PCT), many hikers consider Mather Pass to be one of the more difficult passes due to the steepness of its southern headwall. That said, you need only worry about this if you’re planning on crossing in the snow since the trail over the pass is as beautifully maintained as you would expect a heavily-trafficked trail in a National Park to be.

I’ve been over Mather Pass in both snow-covered and dry conditions – here’s what you can expect in each.

Mather Pass: The South Side

The approach to Mather Pass from the south is a sustained but gradual climb from the South Fork of the Kings River.

This river crossing can be difficult in early season or in high snow years; it’s possible to follow the river on the east and cross a couple of miles up instead of crossing at (just above) 10,000 ft / 3,048 m where the Pacific Crest Trail/John Muir Trail officially crosses (if it’s raging and you can’t find a safe place to cross).

There’s plenty of camping opportunities and plenty of water sources (streams, tarns, and lakes) on the way up to the pass from the south.

Mather Pass: The North Side

The trail here is well maintained (when not covered in snow), but note that once you reach Palisade Lakes, the trail stays up high instead of following the lakes along their eastern shores – but it does drop to follow the shoreline further north. If you’re not following the Southern Sierra High Route or the Sierra High Route up to Cirque Pass at the northern end of Palisade Lakes, then your next bit of trail takes you down the Golden Staircase – a descent (or climb) of around 1,500 ft / 457 m over the next 2 mi / 3.2 km.

Mather Pass in the Snow

Despite the idea that Mather Pass is “one of the hard passes” on the Pacific Crest Trail, I didn’t find it to be too great a challenge. In heavy snow, attempting to follow the trail is probably not the greatest idea. There was a large cornice on the southern side of the pass that you would neither want to try to climb up nor traverse under.

I chose to climb up the exposed rock on the west side of the pass (to the left as you approach from the south) and found it more comfortable than expected. It’s a Class II climb up with what’s a few moments of Class III thrown into the mix depending on the snow cover and the exact route you choose.

Nearing the height of the pass, I found a spot to traverse across the exposed rock and then patches of snow while gaining the final vertical distance.

If you decide to cross Mather Pass in the early morning, you can expect the northern side to be a steep ice chute. If you’re comfortable crossing later in the day, the north side of the pass will be much more manageable.

Mather Pass’s northern side is as steep as the southern side, but it maintains this angle for a little longer before starting to flatten out (and continue down). I hiked down part of the way before glissading (sliding down on my ass) for the remainder.

You’ll need to descend around 700 ft / 213 m before the trail begins to level out and head north toward the Palisade Basin.

The route in the snow ended up being 1.7 mi / 2.74 km shorter but took significantly longer overall.

When I went over Mather Pass in the snow, I scrambled up most of the way on dry rock. However, I did end up using my Kahtoola MICROspikes and Black Diamond Raven Pro Ice Axe for the snowy traverses across the south side and the descent down the north side.

If you’re interested in what snow gear Pacific Crest Trail hikers liked best during last year’s thru-hike, you can find out more on my PCT Gear Survey.

Mather Pass is not a big scary monster of a pass. In good conditions, there’s nothing to be afraid of – particularly when approaching from the south as the climb is very gradual and pleasant.

The northern side and Palisade Basin is more scenic than the southern side, so make it over and camp in view of some beautiful lakes and mountains if you can manage.

Any questions, comments, or concerns about Mather Pass? Leave a comment below or get in touch and let me know! 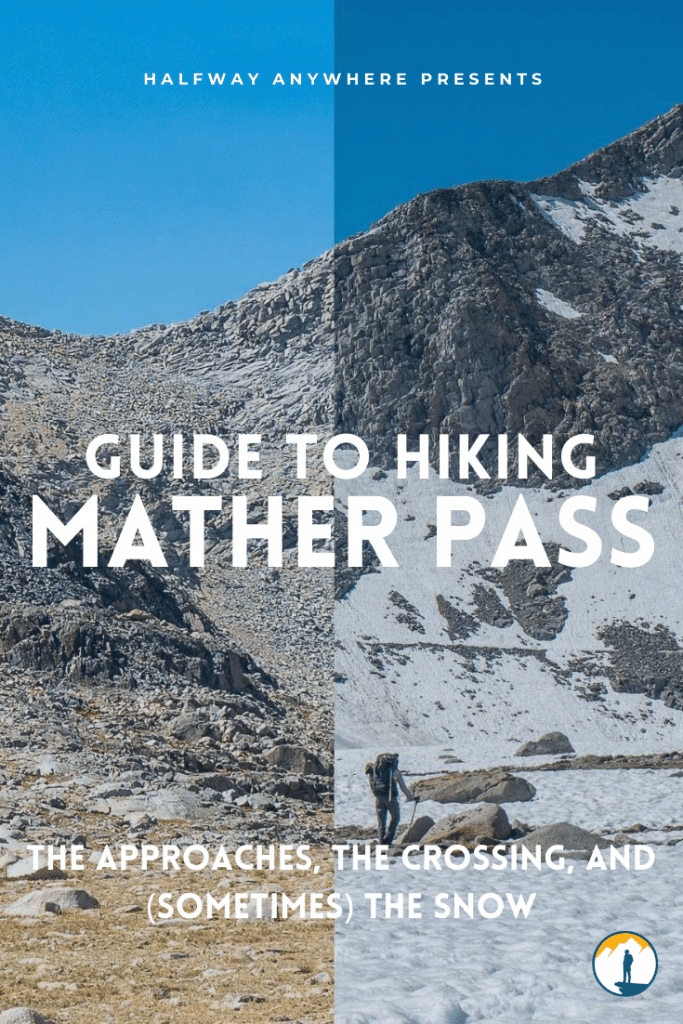