How To Be On-time In Brazil

So you are invited to a party (I know, it’s your lucky day), and the host tells you that their Super Saturday Football Best Barbecue Party Ever Yay! is scheduled to begin at 14:00 (that’s 2:00 PM) – what time do you arrive? A bit on the early side? Right on time? A little late? About an hour late? A couple of hours late? Go have dinner, watch the last game of the day, and then show up? Don’t go at all because you can’t help but embarrass yourself in social settings?

Did you select somewhere between “early” and “about an hour late”? If you did, you’re lucky this has been a heavily controlled dry run of said social situation, because you just made yourself and the host incredibly uncomfortable (like when you need to ask for a plunger at someone’s house). 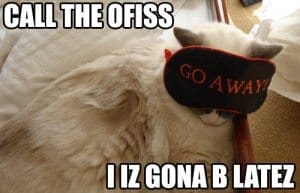 Guests don’t (and are not expected to) arrive until well after the designated start time unless they are hoping to catch the host still showering or finishing up the previous night’s novela.

For example, today I am invited to a churrasco (a Brazilian BBQ, but more awesome than you think).

The official start time of this event is exactly an hour ago. I recently spoke to a friend regarding his expected arrival time, and apparently, he has yet to get out of bed – after which he plans to eat something, maybe workout and then, of course, get ready.

When he finally shows up nobody will question his tardiness. Why?

You see, Brazilian social events are like women, sometimes they tell you one thing, but you are really meant to understand another. Like when you’re told, “sure, go drinking without me (stay home and watch a movie with me)” or, “no, nothing’s wrong (I am irate)”.

So if you are ever invited to meet a Brazilian somewhere just remember:

Don’t forget what on-time at a Brazilian university entails.