If there’s one piece of gear that causes Pacific Crest Trail hikers the most headaches, it’s the bear canister. Most northbound PCT thru-hikers pick up their bear canisters at Kennedy Meadows and then ditch them at either Sonora Pass (Kennedy Meadows North/Bridgeport) or Echo Summit (South Lake Tahoe/Echo Lake); most can’t wait to be rid of them.

The logistics of buying, renting, shipping, and returning a bear canister can be a pain, especially if you’re not expecting to use a bear canister beyond your time on the PCT.

Much of the guidance overlaps between land management agencies, but there are some inconsistencies and the rules can be confusing at times (even when speaking to rangers). The most surefire way to ensure you’re in compliance is to simply carry an approved bear canister.

A Note on Counterbalancing (i.e. the bear hang)

Although counterbalancing your food is an acceptable practice when you don’t have a bear canister and there is no bear box available, it isn’t at all practical in many situations. The areas passed through in Inyo National Forest and Sequoia/Kings Canyon National Park (SEKI), provide very few opportunities for a proper counterbalance.

It’s a common misperception that the counter-balance method is a good way to protect food from bears. However, because bears are so adaptable, many have learned to obtain counter-balanced food. This method generally does not work in these parks. Only use this option if the others are not available.

It is extremely difficult to find an adequate tree and properly counter balance the bags. Counter balancing is not as effective as it once was. Even when it is hung properly, bears may figure out a way to get your food – some bears will chew the branches off trees to get the food. The counter-balance method is only a delaying tactic. Be prepared to actively defend your food. You may need to repeatedly scare bears away from your camp.

Sequoia and Kings Canyon National Parks (SEKI) only require bear canisters in three specific areas. For more information, you can check out the map and area descriptions. Outside of these areas, according to the park information page, you are required to use food storage boxes (i.e. bear boxes) or the counterbalance method (i.e. bear hang).

Note that numbers one through four are not on the PCT. However, they are commonly used as entry/exit points for PCT hikers while resupplying in the Eastern Sierra.

Yosemite is no-nonsense when it comes to food storage requirements. Bear canisters are required, period. No counterbalancing, no bear boxes (outside developed campgrounds), and no excuses.

The Pacific Crest Trail is within the bounds of Yosemite National Park between Guthook (northbound) miles 929.6 and 997.1.

If you plan on camping in Lassen Volcanic (northbound Guthook miles 1344.8 to 1364.1), you will need one of the approved bear-resistant containers for Lassen. Unlike elsewhere on the Pacific Crest Trail, the Ursack Major and the Ursack AllMitey are approved for use in Lassen.

Again, so long as you don’t plan on camping within the park boundary, you don’t need a bear canister. There are no bear boxes in Lassen’s backcountry, but there is a developed campground, Warner Valley, three miles (5 km) north of where the PCT crosses the park’s southern boundary.

The following is a list of all the bear canisters approved for use on and along the Pacific Crest Trail. This list is subject to change. Here is the most current (although obviously outdated) list of approved containers for SEKI and Yosemite. As far as I can tell, Inyo National Forest does not provide a list of approved containers (but it’s probably safe to assume that anything good enough for SEKI or Yosemite will have you covered in Inyo as well). 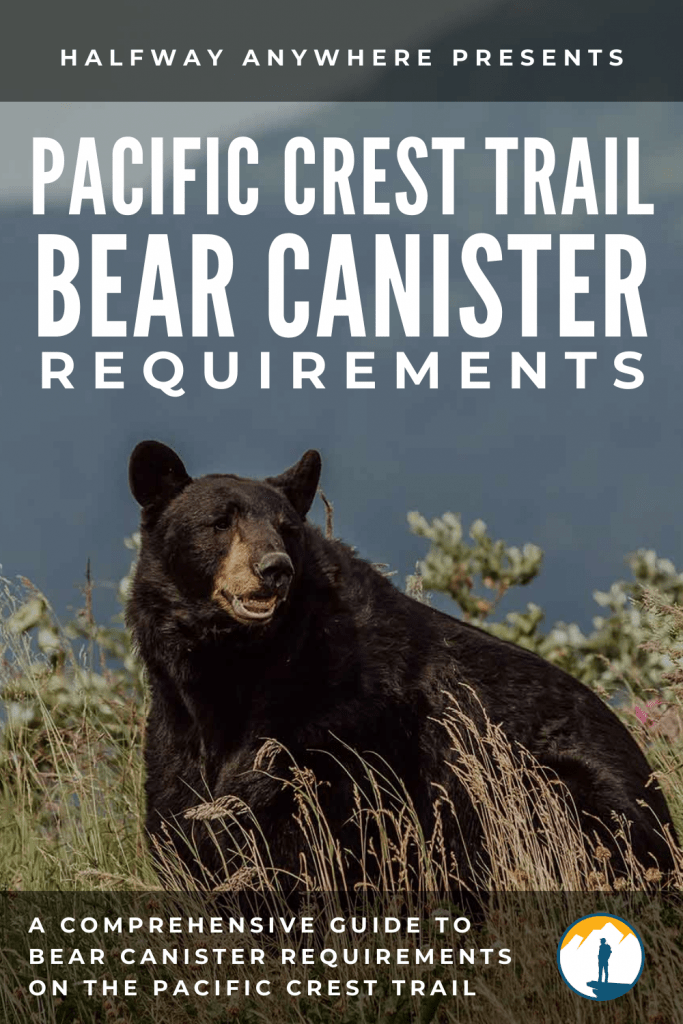