Table of Contents
1 Testing Conditions
2 Notes on the BV500
2.1 The Specs
2.2 The Features
3 The Good
4 The Okay
5 The Bad
6 Who is it for?
7 Most-popular Alternatives
8 Conclusion
9 Find It Online

I used the BV500 hiking through the Sierra Nevada on the Pacific Crest Trail and have used it on multiple trips into Kings Canyon, Sequoia, and Yosemite National Parks since then. It’s been my food container, seat, and large annoying thing in my backpack for many weeks.

The Durability: The BearVault BV500 is not going to break – at least not as a result of anything your puny human hands/strength hope to do to it. You can beat the hell out of this thing and know it’s going to hold up. The only “moving part” would be the tab (part of the canister) that keeps the lid from coming off and the two notches (part of the lid) that need to be depressed to open the can. That said, there are some questions when it comes to the bears (more below).

The Transparency: The BV500 is made from polycarbonate – a transparent plastic – which allows for you to see what’s inside your bear canister without having to open it up. It’s basically magic. Sure, you may know exactly what you have left in your bear canister, but it’s nice to be able to see inside without having to open it (and then the bears can see what they’re missing out on).

The Approved-ness: Despite the fact that we should all be carrying bear-resistant food canisters because we want to protect wildlife (specifically, bears) from itself (and our invasion into their homes), most people carry a bear canister because they have to – not because they want to. The BV500 is approved for use in all the places you are required to have a bear canister (there’s some debate surrounding the High Peaks Wilderness in the Adirondacks as the bears there appear to be able to break into polycarbonate canisters).

The Seat: The BV500 makes an excellent seat – possibly the most practical thing about these canisters (except for the whole keeping the bears away from your food thing). That said, it’s recommended that you close the lid all the way before sitting on it to avoid damage to the bear can. Its function as a seat is almost enough to justify carrying it – except not really.

The Bulk: The BearVault BV500 is not something you’re going to want to have to put inside of your pack. If you know that you’re going to be taking one of these along, I would suggest that you make sure it can fit into your pack horizontally before committing to a backpack. If it doesn’t, you could always strap it to the outside of your pack (there are grooves to make it more secure when lashing it to something).

The Integrity: Despite the BV500 being approved for use with both black and grizzly bears, there are reports of bears having been able to break into this canister. Some bears have figured out how to unscrew the lid while others have managed to break through the canister itself. It’s still approved for use in places like Yosemite, Kings Canyon, Sequoia, and Lassen Volcanic National Parks, but you should always check local regulations before heading out (or making a purchase).

The Cold: The BV500 requires that you depress two adjacent parts of the lid to open it, which can sometimes be made difficult when you find your fingers cold (or nearly frozen after packing up a wet shelter in the morning). The cold has never prevented me from opening the canister, but it has definitely made it inconvenient.

The Weight: This can’t really be avoided when it comes to bear canisters, but the BearVault BV500 is heavy. At 41 oz / 1.162 kg, it could easily be the single heaviest piece of gear in your pack (including your pack). It’s also one of the heaviest bear canister options available (that said, your options are fairly limited).

Solo Hikers: Obviously, everyone’s caloric needs are different and it will depend on how much you are planning to eat every day, but the BearVault BV500 could work for a solo hiker. I would say that the absolute maximum you could probably squeeze into one of these would be 12 days of food. That said, I have usually managed more like 8 days worth on a max carry (but this was pushing big days so I was eating a lot). If you can avoid that long of a carry, the BV450 might be a better option for you (I switched to a BV450 and haven’t looked back).

Couples: The BV500 is a great choice for couples as one of these weighs significantly less than two BV450. Remember, you can always split up the food carry during the day – the bear can is only required to protect your food when it’s not with you. A couple could easily squeeze a long weekend or more’s worth of food into a BV500.

The BearVault BV500 is a bear canister. Bear canisters are bulky, heavy, and a pain to carry, but they are necessary to protect the bears (and other animals) from our delicious human food.

If you’re heading out on a solo backpacking trip, then the BV500 could be a good option, but I would maybe see if all of your food would fit into a BV450 since it’s significantly smaller and lighter. But if your backpack will fit the BV500 and you’re happy to carry it, then there’s nothing wrong with it (except for the some bears getting into it thing – but this is also the case with the BV450). If you’re a couple and you’re out for a weekend or even a bit longer, the BV500 is also a great option.

Check out the BearVault BV500 here. 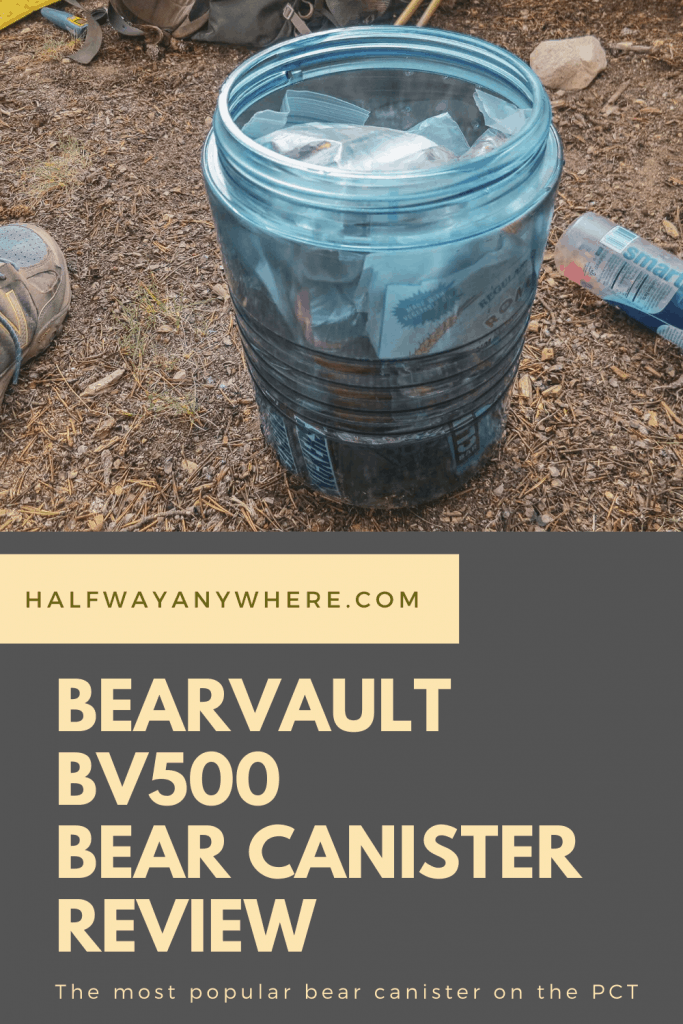