Morro Dois Irmãos (aka Dois Irmãos) is an iconic rock formation at the western end of the Ipanema/Leblon beaches in Rio de Janeiro’s Zona Sul.

Although it may not look it from the beaches to the east, reaching the top of the taller (and more western) summit is possible without ropes or climbing experience.

GETTING TO DOIS IRMÃOS

Reaching the Dois Irmãos trailhead may be the most difficult part of the entire hike.

The trailhead is located in Vidigal, one of Rio’s many favelas, and a place that many Zona Sul residents would never go willingly.

Officially, the trail begins at the northwest corner of Campo do Vidigal (a gated soccer field pictured below). However, there are other unofficial trailheads that can be reached a little further up the hill.

I first tried hiking Dois Irmãos at night and was brought to one of the unofficial trailheads further up into Vidigal.When I arrived I was greeted by about twenty heavily armed men (many wearing masks). Although they were willing to let me pass and attempt the hike, I decided it was best to take their advice and return during the day.

Moral of the story? Go during the day and begin from the trailhead described here. 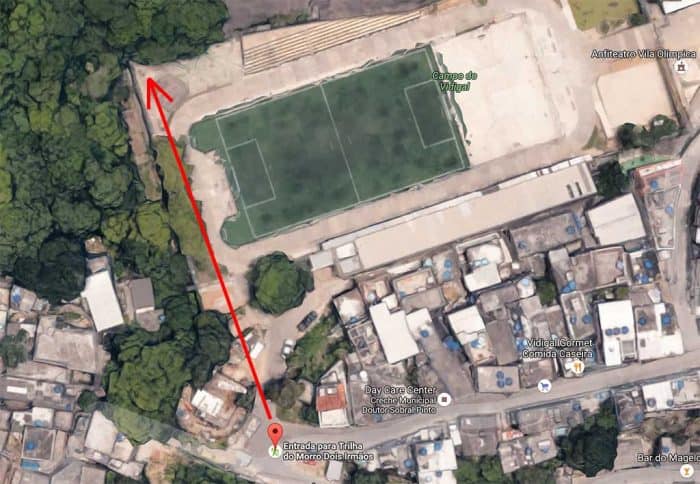 Although the trailhead can (theoretically) be reached via car (i.e. taxi or uber), a popular way of getting around within Vidigal is moto-taxi (yes, a motorcycle taxi).

There is a moto-taxi stand just inside the entrance to Vidigal (located here). If you tell your driver “Dois Irmãos” or “a trilha” (“the trail” in Portuguese), they will be able to figure out what you’re talking about (just make sure you get dropped at the trailhead described here).

Be warned: a moto-taxi ride through Vidigal is not for everyone. Sure, you will be supplied with a helmet (it may not buckle), but you will be holding on for your life as your driver zips through narrow streets, around hairpin turns, and through vehicular and pedestrian traffic. That being said, I find the whole experience exhilarating.

At the time of publishing, the cost of a moto-taxi in Vigidal is R$2.30. If you are charged more, it’s because you’re a stupid gringo (so just carry exact change and hand it to the driver when you arrive).

The trail up Dois Irmãos begins very gradually and alternates between climbing semi-steeply and traversing across flat bits of trail.

It is well shaded, and shortly leaving the trailhead behind it reaches the northwestern ridge of Dois Irmãos. Here you are (hopefully) greeted with nice views of São Conrado, Rocinha, Pedra Bonita, and Pedra da Gávea.

The views continue as you basically follow the ridge up towards the summit – you’ll have at least three or four good photo opportunities on the way up (so don’t get too trigger happy at the first lookout).

You will see plenty of spur trails leading off into the bush (especially further down the mountain), but the main trail is very well laid out and easy to follow.

You might even come across a local resident selling fruit or juice if it’s a nice enough day.

For as steep and imposing as this rock looks from the east, the backside of it follows a relatively mellow slope up with relatively few stair sections (although there may be a few small bits that require you to use your hands as well).

Before hiking up I kept hearing it would take an hour and a half to reach the summit. Including the time I took to stop for photos, chat with hikers, and observe the monkeys (yes, you might even see monkeys), it took me just under forty minutes to reach the summit.

As the trail nears the summit it leaves the cover of the trees and emerges overlooking the ocean to the south.

The summit is marked with a stone pillar that has been graffitied by past visitors to this place (possibly the same great human beings who greeted me when I arrived to hike Dois Irmãos the first time).

To get the views you came here for, you will want to continue a bit further past the summit to the rock sloping down towards the hill just below you.

On a clear day you’ll get great views of the whole of Zona Sul, Corcovado, Pão de Açúcar, and even across the water to Niterói.

Along the northern edge of the summit there is a trail that steeply descends to a rockface below.

You can follow this down and trace the rock around to meet the foot of where you probably stood to take your photos. This is a completely unnecessary detour and is actually a bit sketchy, but if you’re feeling bored or short on adrenaline, then it may be for you.

There are cacti growing between the rocks so be careful not to get a leg full of thorns like I managed to.

When you’ve absorbed all the glorious views of the beach below that your soul can muster, it’s time to head back down the same way you came.

You may encounter a few spots where it looks like there are two trails; if you stay to the right or follow the steps, then you’ll be sure to arrive where you began your adventure.

My GPS recorded the following route up Dois Irmãos.

If you can overcome the idea of “going into a favela” and survive the moto-taxi ride to the top, then you have a very nice hike to look forward to. This trail is fairly popular so, as always, go early if you want to avoid the crowds (and have time to hit the beach afterward).

Have any questions about Dois Irmãos? Want another post about another one of Brazil’s hikes? Have a suggestion to improve this information?

This is the most detailed guide I’ve seen on Dois Irmaos! Thanks! I wished I saw it earlier. I tried to go today but the bus didn’t come. Will try again tomorrow. With this it will be easier. Cheers!

Hope you made it up!