Pedra da Gávea, the largest coastal monolith in Brazil, rises 2,769 ft / 844 m nearly straight up from the ocean, separating Rio de Janeiro's neighborhoods of São Conrado to the east and Barra da Tijuca to the west.

It's visible from all over Rio de Janeiro's Zona Sul and Zona Oeste, but as far as “Rio landmarks” go, it would be unrecognizable to most of the world – Corcovado and Pão de Açúcar (Sugarloaf Mountain) have a dominant hold on that title.

Despite its lack of worldwide fame, the summit is one of the best places to take in Rio de Janeiro, and the hike up is one of the most challenging and rewarding the city has to offer.

How to get to Pedra da Gávea

The Pedra da Gávea trailhead is located on the eastern side of Barra da Tijuca.

BY CAR/UBER: Driving to the start of Pedra da Gávea is relatively straightforward. However, if you don't have access to a car (but maybe even if you do), I would suggest taking an Uber to the start of the trailhead (although it isn't a bad walk from Jardim Oceânico – the westernmost stop on the metro (you can also tax an Uber from here). Driving instead of walking to the trailhead saves 230 ft / 70 m of elevation gain.

BY METRO: If you take metro line 4 (the yellow one) to >Jardim Oceânico, you can either walk or Uber the remaining 1.4 mi / 2.3 km to the trailhead. The walk is relatively straightforward but will require you to cross in one semi-sketchy spot where cars don't stop/slow down.

Walking, taking the metro, or taking a bus, you will come to a roundabout where you have to take the northernmost exit. Leaving the roundabout, you'll pass a guarded gate at the bottom of a very steep road. You don't need to stop and check in here – just wave hello to the gate-person and follow the road up.

Continue up the road until you think that it may have ended, then follow it (up) a bit further. The road takes a left and flattens out as you begin to approach the Pedra da Gávea trailhead.

When you reach the sign letting you know that you've arrived, check in at the hut and write down your information (date, time, name, phone number, address, number in group) for the very bored park employee (who will probably try to sell you water and Gatorade). NOTE: this gate is only open from 8:00 until and you may not be permitted to start your hike if you arrive to the trailhead after 14:00. The gate closes at 18:00.

Now you can begin your hike.

The trail begins by following a path similar to the road leading up to the trailhead. After a few minutes of hiking (uphill – as is most of the hike), it turns into your standard dirt walking track.

Continue along trail keeping the stream (down below you) to your right until you reach a tree with a sign informing you that the trail up Pedra da Gávea is to your left and a cachoeira (waterfall) is to your right (the waterfall isn't worth checking out).

Heed the sign's instructions unless you're interested at trying your hand at the alternate route up Pedra da Gávea (my preferred route up to the summit).

The first bit of trail is crowded with tree roots and is easy to follow (nobody's getting lost out here).

When you come to your first bit of downhill, be sure to look to your right to check out Pedra do Navio (to your right). You can climb up onto this rock and head out to the edge for your first good look back at Barra da Tijuca.

From here forward the trail becomes a bit more challeging as it climbs through a series of rocky sections that require the use of your hands (and feet).

Once you've hiked passed a small spring in the middle of the final rocky section (for now), you will come to a rock with a chain and metal steps cemented into it. Shortly after this, the trail reaches an area known as Praça da Bandeira.

If camping were allowed (it's not), this would be a fantastic campsite; it's also a fantastic spot for a break.

Continuing your climb, the dirt takes on a reddish tint as the trail opens up and you approach Mirante da Laje (a small open section with a rock jutting out from the trail and a view of the Tijuca Forest to the north).

From here you get your best look at Cabeça do Imperador (The Emperor's Head), where people say you can see a face in the rock above (and yes, you still have all that to climb).

Before you reach the part of the Pedra da Gávea hike that people like to freak out about (we'll get to this in a second), you will reach a small spur trail leading off to the left and to a spot known as Paredão.

It's easy to miss (and may be easier to find on your way back), but this photo opportunity is just before you reach the Carrasqueira.

For many would-be hikers of Pedra da Gávea, this is the scariest section of the hike: the Carrasqueira. Here, hikers encounter about thirty-five meters of rock that must be scaled to reach the next section of trail.

The climb is not incredibly difficult or technical, but it's enough to keep many hikers off the summit (be warned, the way down will probably be more difficult than the way up).

There are various routes up the Carrasqueira, some more difficult than others, and there are plenty of spots where climbers can stop and relax on their way up.

This area can easily turn into a bottleneck if you find yourself here on a crowded day. Many of the tours that take people up Pedra da Gávea fix ropes on the Carrasqueira to help some of their more timid clients to the top.

Again, there are many routes up, so don't be afraid to go around someone if they are holding up traffic.

Past the Carrasqueira, the trail flattens as you traverse south along the base of the huge granite stone above you.

After passing an area that looks like a cave you can sit in (a flat rock with another protruding out above), you can either take a left up some rocks for a steep climb up to the summit, or continue straight and follow the trail around the southern side to the top.

You come up onto the summit from the western edge (if you make the left described above) – to your left is the high point (and a bit of climbing), to your right is the “take photos and sit here” area with fantastic views of São Conrado and Zona Sul.

The trip to the northern side of the summit requires that you descend a small section of rock via a chain and then climb up a (usually) wet section, but it isn't anything more difficult than the Carrasqueira.

When you make it to the other side, it is also possible to get up onto the highest rock, but it will require a small jump and some faith in your shoes' grip strength.

Be sure to head to the northernmost point of the summit for great views of Pedra Bonita and the Tijuca Forest.

At what's nearly the easternmost point of the summit (over at the “Zona Sul viewing area”) is a small bit of rock cut out from the huge monilith that serves a bench for those adventerous enough to take the couple of steps down to it (great spot for lunch).

In terms of lighting, the afternoon is the best time for photos to the east (Zona Sul), and the morning hours are best for photos of Barra da Tijuca (to the west). You're probably going to be wanting to take pictures looking east – just letting you know.

Here is a crude map of the trail up Pedra da Gávea. 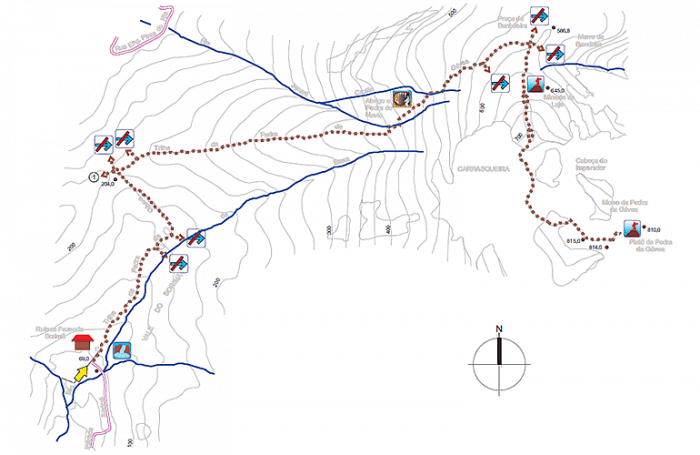 It doesn't matter if you're going to be in Rio de Janeiro for a few days or indefinitely, Pedra da Gávea is a worthy investment of your time.

Remember that the weather at the summit can be incredibly variable, and despite climbing in clear skies, you might find yourself enveloped in clouds after a few hours of hiking (early morning is best for clear skies). Don't let the Carrasqueira or stories from people who have never climbed it before scare you off. Go and see for yourself.

Have any questions about hiking Pedra da Gávea? Want another post about another one of Brazil's hikes? Have a suggestion to improve this information?

I just read your Greyhound Bus adventure. You think the average American is ignorant?

This looks like an awesome hike! Thanks for posting the details! Do they charge an entrance fee here? Is there parking at the entrance?

There is some space for parking at the entrance and there is no entry fee.

Its little old threat but as a new traveller am going solo to Pedra da gavea on Feb ..no experience in rock climbing or anything..am in a good shape tho and my question is this..will i be able to manage alone following your blog???If i come to the hard part,carrasquera ,will i be able to manage to find the route to go up iff there iis nobody around in the early hours?Thanks

The trail is fairly manageable, but it’s strenuous. You shouldn’t have any trouble following the trail, but I know there are a few parts (particularly toward the top) where things can be a bit tricky. Don’t attempt anything you’re not comfortable with. The park doesn’t open until 8:00 am, so chances are there will be others around when you attempt (you can’t just go early in the morning).

I just saw your reply. Sorry for the delay response.I must tell you i have been to Pedra da Gavea and it was unbelievable .I am just editing right now my vlog for the Youtube thats why i saw the answer 🙂 .it will be uploaded tomorrow possibly .I also added your page in my description if they need more detailed explanation if thats ok .

Sounds good! Glad you enjoyed it 🙂

Back in the 1950’s, when we were in High School at EARJ we used to climb Gavea frequently and camp off the trail under the side facing Pedra Bonita. We would spend weekends there and have running water from springs piped in with bamboo conduits. We would build shelters out of palm leaves that were water proof (it could rain hard up there) and provide shelter from the sun at high noon. We normally would run down the trail as fast as possible and swing from various strategically placed vines that were available. We also spent many nights on Pedra Bonita. My brother and I also climbed Morro dos Cabritos, Dois Irmoes and Pao do Acucar (from the north side or bay entrance side. The real challenge was Cocovado on the sea or east side with the long crack that went nearly to the summit. We also climbed the Dedo de Deus in Rio State. Those were the days !!

All on my list once I make it back down to Rio!