Learning The Metric System In Brazil

In Brazil I have discovered that when I step onto a scale I appear to be very light, but when I go to the gym I appear to be very weak; that a five-degree temperature difference is a big deal and going 100 on the freeway isn’t; that keys don’t always unlock doors and that measuring drinks in millimeters is quite fun (since I have not seen a proper pint of beer in many moons).

Most of us are forced to learn something about this invented system of numbers and symbols used for measuring various quantities (volumes of beverages, weights of illicit substances, lengths of snowboards) known as the metric system at some point in our lives.

However, for those residing in the United States, miles and Fahrenheit will sound far more familiar than kilometers and Celsius (and for the record surfboards are measured in inches regardless of geographic location – take that, World).

The other day I attempted to convert miles per gallon to kilometers per liter in my head and it turns out this is impossible to do.

Why would I want to know a statistic featuring a shorter distance traveled and a lesser amount of fuel consumed anyways? That’s like measuring yourself in centimeters instead of feet.

Miles per gallon = upgrade. But any and all of my metric fears have been quelled since discovering this handy conversion chart courtesy of xkcd. 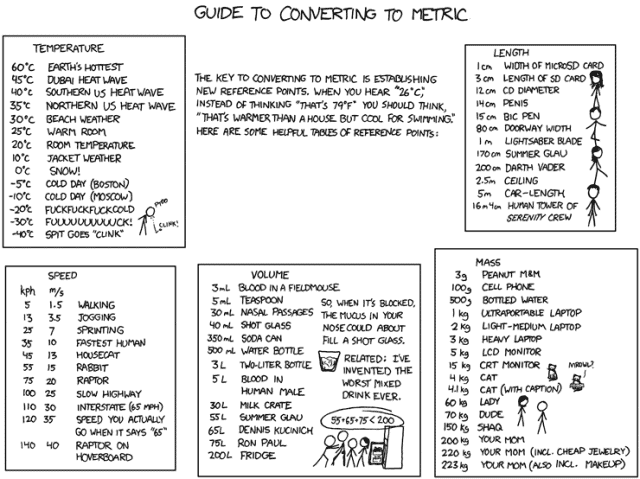