Over the years, there have been a number of deaths on the Pacific Crest Trail. With the trail's growing popularity, it's important that people realize that a PCT thru-hike does not take place in a controlled environment and that death on the PCT is an entirely realistic possibility for the ill-prepared (or even the well-prepared).

Not everyone who begins a Pacific Crest Trail thru-hike will complete their mission of traversing the country-spanning 2,660 mi / 4,280 km trail. Many will leave the trail due to injury, some due to weather, others for financial reasons, and, unfortunately, a very small percentage will die.

So you are interested in hiking the Pacific Crest Trail but you don't know if you're quite ready to drag yourself across a continent for five months and probably die?

Need to come up with some statistics to put to rest your family's fears that you will be dragged from your sleeping bag in the night by a bloodthirsty animal? Want to know how you can expect to meet your maker should this hike turn out to be your last? Not interested in any of this and don't know why you're still reading?

Luckily for you, we have answers.

Here is a breakdown of what has caused them:

Here is a detailed account of each the deaths noted above (in chronological order from earliest to most recent):

FALLING | Gerald Duran | Winter 1983 | During a winter thru-hike attempt, Gerald Duran and his hiking partner Jodi Zatchick fell off a cliff face near Wrightwood, California after losing the trail and slipping on an icy slope. (source).

FALLING | Jodi Zatchick | Winter 1983 | During a winter thru-hike attempt, Jodi Zatchick and her hiking partner Gerald Duran fell off a cliff face near Wrightwood, California after losing the trail and slipping on an icy slope. (source).

HIT BY CAR | Jane Rodman | Nov. 19, 1995 | While taking a road walk detour down Highway 138 in Southern California, both her and Flicka Rodman were struck and killed by a motorist who lost control of his vehicle after falling asleep at the wheel (he received a five-day jail sentence) (source).

HIT BY CAR | Flicka Rodman | Nov. 19, 1995 | While taking a road walk detour down Highway 138 in Southern California, both he and Jane Rodman were struck and killed by a motorist who lost control of his vehicle after falling asleep at the wheel (he received a five-day jail sentence) (source).

FALLING | John Lowder | June 1999 | It's thought John Lowder (69), a doctor from San Diego, slipped on some ice crossing New Army Pass in the Sierra resulting in broken bones and a head injury. He was found in his sleeping bag following the accident. (source).

UNKNOWN | John Donovan | May 2005 | John Donovan died after becoming lost on Southern California’s Mt. San Jacinto in an unseasonal snowstorm. His body was not recovered until more than a year later. The cause of death is unknown, but hypothermia is suspected (source).

FALLING | Ray “No Way Ray” Echols | May 15, 2006 | Near Deep Creek in the San Bernardino National Forest (California), Ray Echols lost his footing and fell approximately 200 feet to his death (source).

HEATSTROKE | Timothy Evan Nodal | April 24, 2014 | Near Lake Morena (California) Timothy Nodal began to feel sick and emergency services were summoned. When firefighters reached him, they were going over his symptoms when he suddenly went into arrest. Emergency personnel was unable to revive him (source).

HEATSTROKE (SUSPECTED) | Marvin Novo | May 29, 2017 | In the Mission Creek Preserve (California), Marvin Novo's body was discovered along the West Fork Trail. It is suspected that his death was heat-related (source).

DROWNING | Rika Morita | Mid July, 2017 | In Kings Canyon National Park (California), Rika Morita was discovered in the South Fork of the Kings River. The 2017 hiking season was plagued by many dangerous river crossings because of the unusually high snowpack from the previous winter (source).

DROWNING | Wang Chaocui | Mid July, 2017 | In Yosemite National Park (California), Wang Chaocui was discovered in a river in Kerrick Canyon. The 2017 hiking season was plagued by many dangerous river crossings because of the unusually high snowpack from the previous winter (source).

FALLING TREE | Finn Bastian | August 27, 2019 | In Stevenson (Washington), Finn Bastian, a hiker from Germany, died after being hit by a falling tree on the PCT. Officials reported that the tree had rotted at the base, causing it to become unstable (source).

All but four of these deaths happened in the desert (that is, the southernmost 700 miles of the PCT). No wonder hikers complain so much about that place.

I also came across the following deaths which occurred on or near the PCT but did not involve thru-hikers:

HEATSTROKE | Unnamed Woman | June 16, 2021 | Emergency services were called to aid a woman near Anza (California) suffering from suspected heatstroke. The woman was pronounced dead at the scene (source).

FALLING OBJECTS | Phillip Crosby | December 11, 2014 | Camped off the PCT near Mt. Ashland Ski Lodge (Oregon), Phillip Crosby was crushed by a tree that fell on his tent in strong wind (source).

FALLING | 20-year-old male | August 20, 2013 | A man free-climbing a rock face with friends near the PCT in Yakima County (Washington) fell to his death (source).

SUICIDE | Douglas Cracker | October 29, 1988 | A hiker on the PCT discovered the body of Douglas Cracker, who died of a self-inflicted gunshot to the head, half a mile north of Highway 62 in Crater Lake National Park (source).

And that's it! (That are readily available via the internets and that we know of.)

It turns out that the Pacific Crest Trail is a safe place to be (and when the zombies, robots, or aliens finally decide to make their move, I'll bet it'll be even safer). Of course, there may be more death along the PCT than reported, but the reality is that there is very little (but don't trust me). So if you ever see a headline something like, “Hiker deaths on the PCT jump 200% in the National Scenic Trail's deadliest year ever!“, know that this means ten people died doing something inherently dangerous (aka it's clickbait).

So if you have some mental block about hiking the PCT because of all the scary things that are waiting for you out there, then know that despite those things actually existing, they are unlikely to kill you.

But also know that you'll probably die out there. 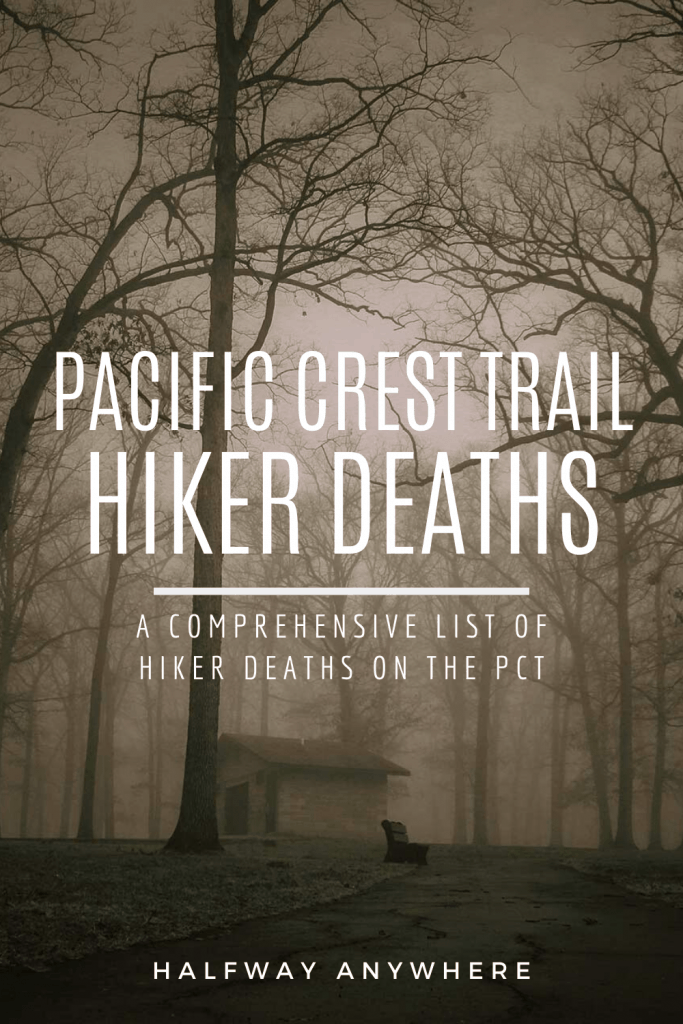