In preparation for what’s going to be a very odd year of hiker surveys (the 2020 surveys for anyone reading this sometime in the future – if the world has managed to survive), I’ve decided to finish the final member (for now) of the Pacific Crest Trail Survey Family from last year’s PCT Class – the hiker breakdown. This is basically where we compare different groups of hikers on the trail – first-time vs. experienced thru-hikers, older vs. younger hikers, northbound vs. southbound hikers, etc.

If you find yourself reading and wondering, “It would be interesting to see how X compares to Y,” let me know in a comment (or via message) and I might add it here (or to next year’s survey).

If NO LABEL has been appended to a data point, I used all data collected.

First up, let’s look at the difference between sexes on the Pacific Crest Trail. The overall breakdown of hiker gender was as follows:

*I did not include these categories in the chart below because the data would be reflective of only a single person’s (or couple people’s) hikes. Also, note that categories are self-selected by survey respondents.

Next, hikers broken down by age. The average age of this year’s class was thirty five 35 (σ = 13). That said, the median age was 30. If you don’t know the significance of σ or median, I suggest you consult the Google.

Here’s how many hikers fall into each age range:

Domestically, there were hikers from Puerto Rico and 46 states – all except Arkansas, Delaware, Rhode Island, and West Virginia.

Surely more-experienced thru-hiker stood a better chance of completing the trial than rookie thru-hikers, right? Right. More-experienced hikers not only had a higher PCT completion percentage, but they also completed the trail faster – despite taking more zero days (on average).

Of this year’s class:

Now we’re moving into the realm of comparing hikers who completed the entire PCT. First up? Faster-than-average and slower-than-average hikes. The average amount of time it took hikers to complete the PCT was 152.19 days – basically five months.

Note: The data below is entirely from thru-hikers who completed the entire trail as it wouldn’t make sense to include anyone else.

How much does a Pacific Crest Trail thru-hike cost? A common question among prospective hikers, and a quite reasonable one to want some answer to.

That said, how much a PCT thru-hike costs is incredibly variable. This year, there were hikes that (supposedly) cost under $1,000 and hikes that cost upwards of $50,000 – quite the spread.

Note: The data below is entirely from thru-hikers who completed the entire trail as it wouldn’t make sense to include anyone else.

More on how much it costs to hike the Pacific Crest Trail here.

Light vs. Heavy Base Weight

If you’ve never thru-hiked before, you might think (based on internet chatter) that the gear you start the trail with will ultimately determine whether or not you end up completing the trail. While there are arguments to be made in favor of this, the issue is less what you start with and more whether you’re willing (and able) to adapt and admit that pre-hike you didn’t know all that middle-of-hike you knows.

For more on PCT Gear, check out the PCT Survey Gear Guide.

Now, let’s take a look at which group of hikers had the highest and lowest value for each of the descriptors above. Some of these make sense – the “Short Hikes” contingency had the fewest number of zero days while “Long Hikes” had the most zero days. Other stats are a bit more puzzling – why “Long Hikes” somehow was the lowest-spending group of hikers is strange. Maybe they rested more on the trail and so they were less in need of hotels in town (hotels can be a very expensive part of trail life).

Take a look and let me know what you think.

Leave a comment and let me know if you what you find to be useful, interesting, or if there’s something you would like to see included in the future. 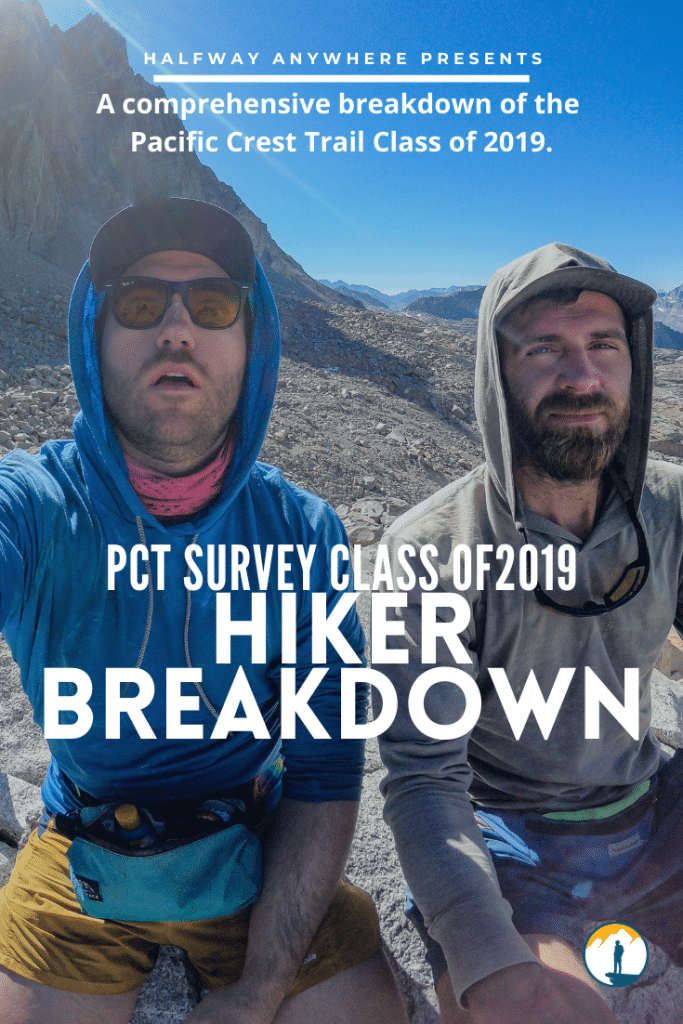