Why Water Caches Are Bad for Thru-hikers

Water caches are locations where water is stored or left out where there would otherwise be none. They have become increasingly common on long-distance trails such as the Pacific Crest Trail and the Continental Divide Trail, which may sound like a good thing – water caches mean hikers aren't forced to do huge water carries and that hikers have water available in otherwise dry areas of the trail. Good, right?

That's the thing with trail angels – they are not (and should not be) a prerequisite to hikers being able to successfully complete their hikes; neither should the water caches they maintain.

I do not doubt the intentions of those maintaining the water caches – they provide a service that most hikers will find themselves incredibly grateful for – but the trail angels stocking the caches are just that, trail angels. What does that mean? It means that they're just random people who like helping out hikers.

Anyone can call themself a trail angel – it's not like there's some governing body or organization of trail angels who hold everyone accountable for doing their part. That's what makes trail magic, magic; it's there one day and gone the next. Get it? Like magic.

Since imposing a quota on northbound hikers starting at the southern terminus of the Pacific Crest Trail, the PCTA has seen every day during March, April, and May fill with the maximum-allowed 50 hikers. Assuming each hiker will drink one liter and pack out four liters from a water cache (and assuming they're all hiking the same pace) means that a water cache will need 250 liters (66 gallons) of water per day to sustain the flow of hikers. Every day for three months. Three months at 250 liters (66 gallons) per day? 22,500 liters (almost 6,000 gallons) of water.

The amount of time and effort required to transport this water to a cache is enormous. And I'm assuming that someone has gallon jugs they're swapping out because the cost of buying 22,500 liters (almost 6,000 gallons) of water is in the thousands of dollars. Imagine what happens the day someone stocking a cache can't make the trip out – what if they get sick or they get into a car accident on the way to the cache? If hikers are relying on these caches then this could spell disaster for everyone counting on there being water available on a given day.

How much water does a cache need?

Sure, the sight of clean, ready-to-drink water suddenly appearing in the middle of the desert may be beautiful in the eyes of a thirsty hiker, but water caches are anything but beautiful.

Oftentimes, caches are poorly maintained and end up being nothing more than a collection of trash. Empty bottles are objectively garbage and hundreds of empty (or even full) water jugs tied together on the side of a dirt road isn't a terribly inspiring sight. In their misguided attempts to help hikers, many trail angels end up doing more harm than good (like when you're hitchhiking and the person giving you a ride drops you where they think is best instead of where you've instructed them to).

Even the better-maintained caches end up attracting garbage from hikers. Carrying your trash out is something all hikers need to do, but for whatever reason, many decide that leaving their garbage at a water cache is acceptable practice (it's not). This garbage can then attract wildlife adding yet another unintended consequence to water caches.

What's more is that because water caches are oftentimes the only water sources for miles in either direction, they become places where hikers congregate and camp.

Established campsites and campgrounds are (typically) set up to withstand the impact that comes with repeated use over the course of a hiking season. Random spots in the trail where people decide to set up water caches are not. Caches become de facto campsites in what's already a fragile (oftentimes desert) ecosystem. There's enough of a problem with mitigating hiker impact on the trail before introducing the introduction of water caches.

Even when it comes to natural water sources – just because there's water somewhere does not translate to this somewhere being a good place to camp (this is why camping next to rivers and lakes is not permitted).

These long-distance trails are not meant to be some super-accessible, family-friendly adventures fit for anyone and everyone who fancies themselves an extreme walking adventure; they're meant to be challenging. No reliable water sources for the next 45 mi / 72 km? Time to suck it up and be uncomfortable for a while because it looks like you're going to be carrying a lot of water.

There's no rule that says you're not supposed to have to carry water for long stretches on a long-distance hiking trail. In the southern portion of the Pacific Crest Trail and the Continental Divide Trail, you're hiking through the desert. There's a reason why these sections are consistently rated low on the “Favorite Section” portions of the PCT and CDT hiker surveys. They're typically the hottest sections and the sections with the least water – not a great combination, but a reality of the trail.

For the record, there are some water caches (like the caches in New Mexico's Bootheel on the Continental Divide Trail), that are managed for hikers who have either cached water for themselves or have paid for someone to cache water for them. These are not the water caches I am talking about here.

However good the intent, unregulated water caches are no good for hikers and are especially no good for the trails. No matter how much people are told not to rely on caches, some number of hikers will ultimately depend on them and put themselves at risk (not to mention the impacts on wildlife and on the trail).

As difficult as it may be, if you're a hiker, don't rely on water caches; it sets a bad example for others and the potential consequences (you die?) are not worth the benefits (you don't have to carry as much water). If you're a trail angel, don't set up water caches. If you want to help hikers, drive out to somewhere the trail crosses a road and dish out trail magic in the form of refilling water bottles, handing out cold drinks, or otherwise distributing delicious snacks and/or love to hikers.

Have fun out there, friends. 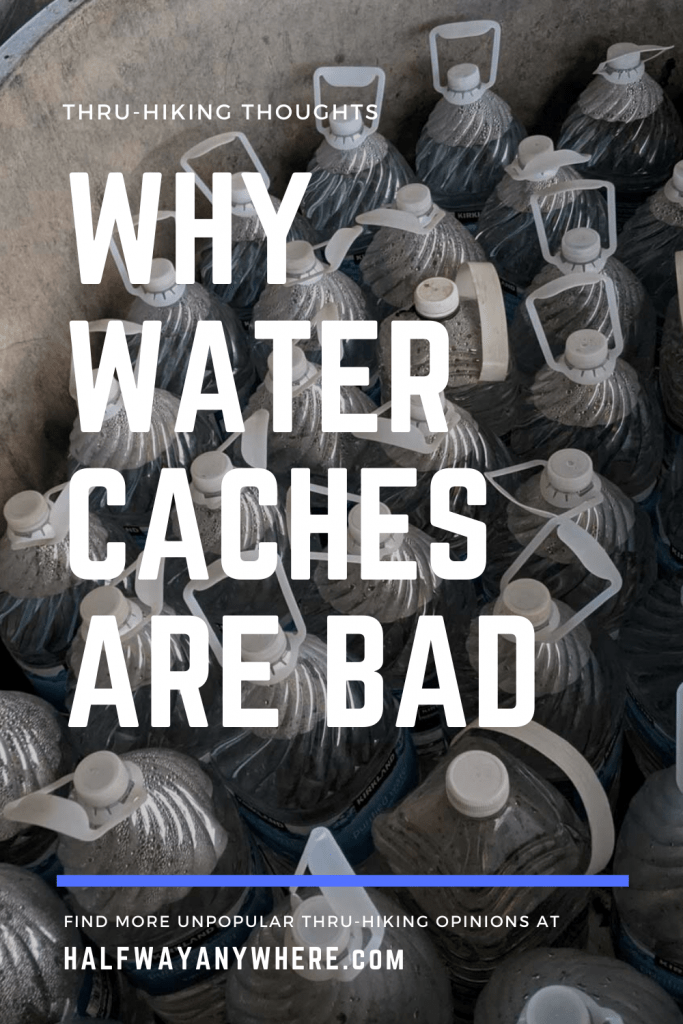 I would rather see the use of water caches than to endanger hikers especially in hot stretches such as SoCal. A rise in dehydration cases at local facilities would be expected as well as “reduces”. Furthermore, living off the land may not be any better with limited natural water resources that hikers will further drain such as the lakes in the central Sierra.

Plastic of any sort will contribute to the micro plastics in the air, water and land. So water caches should NOT be plastic bottles especially those placed in the sun. However, most of the light weight gear is plastic based so getting rid of plastic water bottles would be a good start.

Yes, but if water caches weren’t there, hikers would not be put in danger as they would have no reason to expect water. Hikers would simply have to carry more water between sources. Does that make the PCT more difficult? Sure, hiking from Mexico to Canada is not meant to be easy.

I’m section-hiking the PCT over multiple years. I did that 42-mile waterless section south of Walker Pass without using the water caches. Yes, it was nice to know that the water caches (as well as a few off-trail springs) were there in case I had an emergency, and the one I checked had water when I passed by (the others I didn’t even bother to look if they had water). But I didn’t need them, and that’s without the ‘trail legs’ of the thru-hikers. I felt more secure knowing that, even if there was no water at the water caches, I’d be fine. I found it disturbing that all the thru-hikers I talked to on that section relied on the water caches–if a section hiker like me could manage without them, why couldn’t they manage without them too? Best of all, when I finally reached Landers Camp Spring, the permanent water source at the end of the 42 miles (I did that section southbound), it was the best feeling. You have to pay your way through the lows to get the highest highs.

Ironically, I enjoyed that section quite a bit, whereas many thru-hikers tell me that was one of their least favorite parts of the desert, or even the entire PCT.

It’s going to be a sad day when I thru-hiker dies somewhere in the desert because “there was supposedly water cached”.

Take a look at this:
https://www.sierraclub.org/sierra/how-tech-has-changed-hiking

Wow! Thanks! It’s so great to hear strong support for some traditional elements that make the Trails what they are in lore and in practice. You don’t have to be a purest to agree with this – the waste and risks of uncontrolled caches are clear. If it was just about life safety there could be some justifiable push back, but as you allude to, quite often it builds to the level of providing convenience, which takes away from the experience of even those that don’t avail themselves of the caches. Some people want to maximize and push the bounds of convenience no matter the cost$$$, but these same people still want bragging rights to compare accomplishments achieved in the past with the present. The spirit is lost on them and everyone suffers. Question: Are there Trails or just endeavors you are aware of that are objectively harder/more difficult in 2020 than they were 10 or 20 years ago? Smart phones, tech gear, more established routes, etc. make a lot of what was unique and extreme before seem relatively mundane now. Is it the need for bigger challenges that dilutes the satisfaction that can come from just facing the beauty and hardship of nature? Do we always need to ‘master’ it?

I can’t think of anything that would have been made more difficult over the past 10 or 20 years unless you count having to get a permit as making something harder/more difficult.

Excellent suggestion that Trail Angel support should be at road crossings. Trail Angels should also practice “Take only pictures, leave on foot prints” too.

Well stated – thanks, Mac! Keep up the great work and stay safe.

Glad to hear you agree 🙂