AZT Bikepacking: How to Cross the Grand Canyon

The Arizona Trail (AZT) is one of just a handful of National Scenic Trails that allows for mixed-use; hikers, bikers, and equestrians are all welcome on the AZT. That said, the route that hikers and bikers on the Arizona Trail follow varies due to the prohibition of bicycles on trails in wilderness areas and national parks.

All but one of the wilderness areas and national parks have bicycle reroutes that more-or-less parallel the hiker AZT. The one exception? The Grand Canyon.

Table of Contents
1 What to Do at the Grand Canyon
2 Mailing Gear to the Grand Canyon
3 How to Carry Your Bike
4 Where to Camp
4.1 The South Rim
4.2 Below the Rim
4.3 The North Rim
5 Resources

What to Do at the Grand Canyon

The most common choice, at least so far as I can tell from having spoken to other bikepackers, is to carry your bike through the Grand Canyon. Is it easy? No. Will it hurt? Probably. Does it ultimately make the most sense? Yes.

If you’re not bikepacking the Arizona Trail with a backpack capable of carrying your bicycle through the canyon, you’ll need to get yourself one before setting off on what could possibly be the most difficult day of your trip (unless you plan to just carry your bike with your hands like a beast).

In addition to a backpack, you’ll also need to get whatever straps or attachments you’ll need to carry your bicycle (that you don’t already have), and possibly a pair of shoes suitable for hiking in with a heavy load on your back (unless you’re riding flats with said shoes or you really love your cycling shoes).

To mail yourself a package at the Grand Canyon, use the following address:

Name (use the name on your ID, not a trail name)
General Delivery
Grand Canyon, AZ 86023

The South Rim Post Office is located here (it’s not too far out of the way). It is open year-round on weekdays from 8:30 AM to 3:30 PM. It is closed on weekends and holidays. According to the contact page on the Grand Canyon’s website, you need two valid pieces of identification to pick up a package mailed General Delivery. They only asked me for my license. The phone number for the Grand Canyon Post Office is +1 (928) 638-2512.

The city of Flagstaff isn’t too far south of the Grand Canyon, and it’s home to many bicycle shops, outdoor gear shops (including an REI), post offices, and hotels. If you wanted to purchase or mail yourself a pack in/to Flagstaff and just ride with it to the Grand Canyon, this could also be an option.

Wondering what to do with your gear once you make it to the North Rim? During the season, there is a post office that operates at the North Rim (located in Grand Canyon Lodge). This is the only post office between the Grand Canyon and the northern terminus; there are no postal services in Jacob Lake. However, the trail between the North Rim and the northern terminus is relatively easy (especially if you’ve biked the entire AZT northbound up until this point), and there’s no reason you couldn’t just keep/wear your backpack until the end of your trip.

FOR SOUTHBOUND BIKERS: If you’re bikepacking the Arizona Trail heading southbound, I suggest you begin your ride with everything you’ll need to hike through the Grand Canyon. You can then mail whatever you won’t be using for the remainder of the ride (e.g. backpack, shoes, straps/clips) back home (or wherever) from the post office located at the South Rim of the Grand Canyon (open 8:30 AM to 3:30 PM weekdays, closed weekends). The South Rim Post Office operates year-round.

There is a post office located in the general store in Tusayan (south of the Grand Canyon), but they do not accept general delivery packages and are cash only. They only carry small boxes, so if you’re looking to mail back something large (like a backpack) you’re better off doing it from the post office in the park (or just ask nicely at a nearby business to use a discarded box). The phone number for the post office in Tusayan is +1 (928) 638-9228. They are open weekdays from 9:30 AM to 3:00 PM (closed weekends).

NOTE: There is no post office at Jacob Lake (north of the Grand Canyon).

How to Carry Your Bike

As alluded to above, no reasonable alternative exists to avoid crossing the Grand Canyon on the Arizona Trail.

If you are planning on carrying your bike through the Grand Canyon, let me be the first to warn you that this hike should not be underestimated. I went into this with the attitude of, “hiking through the Grand Canyon is going to be fairly chill – I’ve hiked hundreds of twenty-something-mile days and this will just be doing the same thing but with a heavy pack on.” I did the entire Rim to Rim hike in a single day and it was one of the hardest things I’ve ever done.

My recommendations for a successful carry of your bike through the canyon are as follows:

Assuming you’re going to be carrying your bicycle through the Grand Canyon, bikepackers have a few options when it comes to camping logistics.

Here’s what’s up with each.

Dispersed camping is allowed in the Kaibab National Forest so long it’s not expressly prohibited because of proximity to developed campgrounds or resource concerns. I recommend heading down Forest Service Road 328, past Apache Stables (where camping is prohibited), and finding somewhere nice to sleep before your hike down into the canyon. More on Kaibab National Forest dispersed camping here.

It’s around 8 mi / 13 km down mostly flat and paved paths from this area to the South Kaibab Trailhead at the South Rim. Alternatively, there is plenty of accommodation located in the town of Tusayan (just south of the park entrance).

For “regular” Mather Campground campsite reservations check here; campsites are between $18 and $30 per night. There are toilets, trash cans, and potable water available at Mather Campground.

There are also toilets and trash cans located at the South Kaibab Trailhead (where the AZT drops into the canyon).

The Arizona Trail passes through the area known in the Grand Canyon as the Corridor.

Essentially, the Corridor is the most popular area of the park and contains maintained trails, water stations, paved roads, toilets, signs, emergency phones, and ranger stations. The Corridor is basically where someone who is “going to go visit the Grand Canyon” would find themselves.

This means that camping below the rim on the AZT can be logistically difficult since you’re only permitted to camp within one of two developed campsites along the AZT. There is no dispersed camping permitted below the rim along the Arizona Trail.

Grand Canyon backcountry permits are incredibly frustrating to get in advance as they only accept permit reservation requests by mail or fax (that’s right, no phone or online reservations). If you would like to request a permit, use this form. That said, there are last-minute walk-up permits available. These can be obtained from the Backcountry Information Center at the South Rim or North Rim. There is also a waitlist for campsites you can join at the backcountry offices.

Because the North Rim is less popular than the South Rim, camping here isn’t as complicated.

There is a hiker/biker campground at the North Rim Campground. During the winter (typically between December 1 and May 15), you can obtain a permit for the hiker/biker campground in advance via the backcountry permit office (fax/mail/in-person). Additionally, during winter, dispersed camping is permitted between the North Kaibab Trailhead (but not at the trailhead) and the park’s northern boundary. 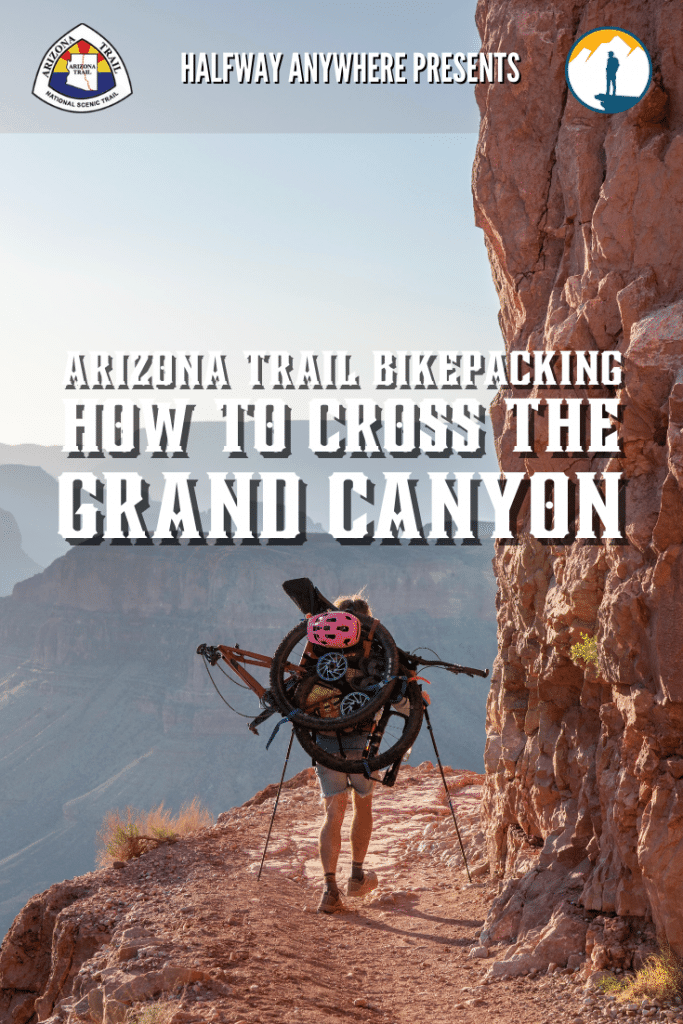 Mather Campground (on the S Rim), like the N Rim, has a hiker/biker camping area. Not sure of the cost.

Good call! I wish I had known this. They definitely don’t advertise it. I’ve made an update.