Bored with simply hiking everyday trails after the Pacific Crest Trail, I felt that my outdoor expeditions required another level of danger (because bears, dehydration, and murderers in the desert were not enough), and so introducing the threat of toxic sulphuric gas and volcanic eruption was the only appropriate thing to do.

Located in Japan's Kumamoto prefecture, Aso-san (or Mount Aso) is the largest active volcano in Japan at 5,223 feet (1,592 m) above sea level (the second largest in the world behind Mauna Loa on the Big Island of Hawaii). Climbing to the top is well worth your time (and the risk). Not only do you get to expose yourself to potentially unsafe levels of noxious toxic gas, but you get to see Japanese hikers decked out in far too much of the most expensive and flamboyant hiking gear available (there were snow gaiters and down jackets galore – it was 68°F (20°C) and there was no snow).

And to clarify: Aso is both the name of the volcano and the town in which it is located. 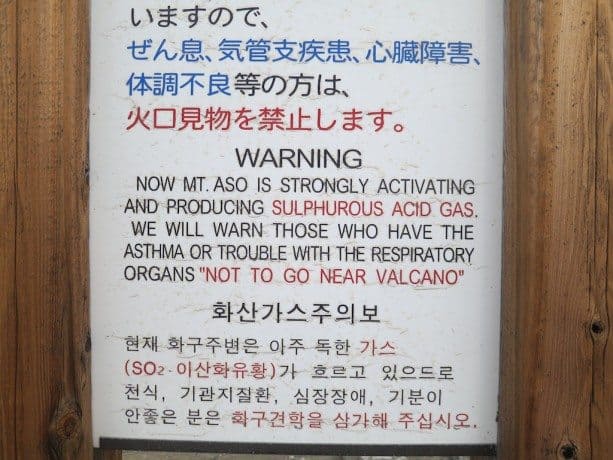 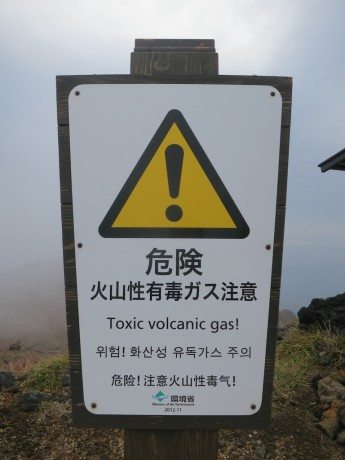 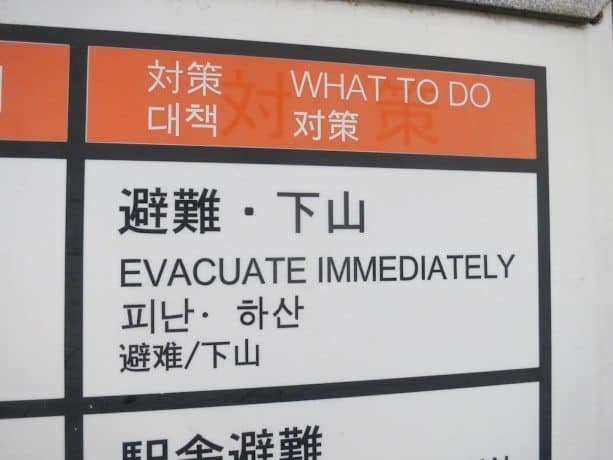 Aso-san is on the island of Kyushu (yes, Japan is an island nation, not a contiguous landmass) in the south of Japan (in Kumamoto, a place far from the tourist hubs of Tokyo and Kansai region (Osaka and Kyoto)), and should you somehow find yourself on the island, a trip to Aso would be well worth it.

How did I get to Aso?

I drove there. Yes, on the left side of the road. Yet hope remains for those undertaking a carless expedition in Japan as well. The Japan National Tourism Organization has made an informational flyer (in English) to assist travelers wishing to reach Aso. Said document can be found here.

Be careful when planning on where to arrive at the mountain, as the summit can be reached from multiple directions. the coordinates for those wishing to hike are 32.899058, 131.102508 (the northern side of Aso).

All that could be seen from the Aso's northern parking lot was a tower of smoke above the mountain. Smoke toxic to anyone who dares breathe it directly.

At the beginning of your hike you will arrive at a junction of three trails. The left trail does not lead up the volcano, the most difficult trail sits directly ahead of you and leads to the top or Mt. Takadake before continuing to the crater, and the trail to your right is the most direct route to the summit.

Yellow arrows painted on rocks point the way for hikers, and red crosses mark paths to certain death. You will also find posts with maps and distances located at each trail junction to help you find your way up the mountain (just make sure to check the map's orientation).

The hike can be completed in less than an hour, from the parking lot to the crater, if you choose to go directly to the crater and refrain from making any stops along the way.

For those of you who dislike the idea of physically hiking up to the crater, the fine people of Aso have installed a cable car that will bring you from the parking lot to the top for a nominal fee (however, the cable cars will shut down if the wind turns to blow volcanic gas into the observation area).

Once you reach the crater rim you will be able to see down to the bottom, but you will be a bit underwhelmed if you chose to hike to the top of Mt. Nakadake or Mt. Takadake (Nakadake offers the best views of the crater (pictured below), although Takadake sits a bit higher). Bringing food with you is a good idea since the vendor pickings were rather slim (unless you enjoy nibbling on sulfur blocks), and there are (what I assume are) shelters for you to sit and eat in (if the idea of being out in the open frightens you).

That’s an intense hike but totally worth it for the views. It’s kind of scary to think you’d have to evacuate immediately though!

The view down into the depths of the vast crater is breathtaking. Like looking at Everest in reverse. I’s probably as close as you’ll ever get to seeing “the center of the earth.” Strongly recommended — probably in fact one of the true wonders of world. Makes Yellowstone look a bit lame.

I got as close to the crater as (I thought) possible, but was not able to witness this glorious inverted Everest. Perhaps the winds simply did not favor me on this day.

Great adventure in Japan Mac! Sometimes you just have to step out of your comfort zone to be happier and experience life. 😀

I love how you wrote this – I love hiking and have done many a backpacking trip and even day hiked Mt Whitney (although not a technical hiker – just took the long route and slugged through).

For this hike, is there a way to start lower? Given its only around 5K elevation, I would hope that I can make a full day hike out of this and start as low I can while avoiding technical hiking. I did some searching, but most commentary centers around getting shuttled directly to the top

You can start a bit lower than where I did, but I am not sure if there is a trail (if there’s not, you can roadwalk to the trailhead I began at). There are a few spur trails around the crater to explore if you want to extend the trip a bit.

Japan is big on surrounding nature with concrete :/