Bartering In Brazil: Reais And Their Animals

Similar to language, money is made up.

It has no real value just as words have no real meaning. The value of money and the meaning of words exist because of what the society around them dictates.

I could say something like “vai tomar no cu” to an English-speaking person and even if they had some idea of what it may mean or what I am attempting to convey, they really wouldn’t think anything of it (I still find it difficult to appreciate the weight of this phrase). However, walking up to a Brazilian and saying this will likely get you bitched out, knocked out or both (no joke – I have tested this).

The barriers surrounding money have become somewhat less of an issue in this era of globalization since a bill worth R$100 (that’s reais, the currency used in Brazil) can be immediately exchanged into approximately $60 USD (assuming you are in America with foreign currency, e.g. you’re a drug/arms lord and/or human/organ trafficker).

Tasked with having to use the real (or plural, reais) on a daily basis I have come to understand (somewhat) this new and mysterious (and don’t forget ultimately worthless) form of value bargaining. 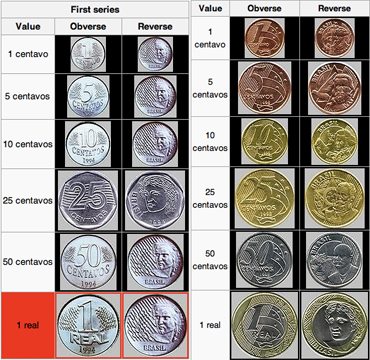 The coins and bills in Brazil are significantly different (looking) than those in the United States (as should be expected); most notably, all the bills feature pictures of animals on the backside, which is awesome (presidents and memorials are so boring).

Just as you can find older and newer coins bills in the US, you can find the same thing here. Brazil’s first generation currency (produced pre-1998) features all silver coinage and a R$1 bill (I still hunting for one – they are like the $2 bills of Brazil).

These can still be found in circulation, but are not nearly as common as the newer editions. And what’s the best bill you ask? Well the R$20 has a monkey on it (a Golden Lion Tamarin to be exact), but the R$50 has a Jaguar – close call.

Perhaps a monkey riding into battle on a jaguar would be for the best.

The new series is much better than the old!