In the yearly Continental Divide Trail Hiker Survey, hikers share both their lowest moments on the trail (physically, mentally, emotionally – the literal lowest point of the CDT is Waterton Canyon, Montana at 2,972 ft / 906 m), as well as when, if ever, they found themselves in a situation where they felt they were in danger or where they were legitimately afraid.

Hiking the CDT means more than blindly wandering down a path filled with trail angels eager to help hikers on their journey to or from Mexico or Canada. A lot of the trail can suck (and sometimes it sucks a lot).

It's not unrealistic to say that a Continental Divide Trail thru-hike could be someone's final adventure – you could end up caught in an avalanche (the San Juans can be dangerous early in the year), with heatstroke in the desert (the Bootheel is no joke), surrounded by a forest fire (a truly underrated hazard), or in a hitch with a drunk driver (if you have a bad feeling about a hitch, don't get in; wait for the next one).

Hopefully, none of this happens during your (or your loved one's) hike, but it's possible.

As a part of the thru-hiker survey, I also ask hikers, “What (if anything) was your lowest moment on the trail?” Yes, social media is filled with photos of sunrises, sunsets, and mountain vistas, but not of hikers pooping their pants, crying alone in their tents, or being swarmed by mosquitoes.

Read the following knowing that any one of these things could (and very well may) happen to you, should you find yourself on the Continental Divide Trail.

Terrible Moments on the CDT

Sick and Injured on the CDT

Why New Mexico Was Terrible

Why Colorado Was Terrible

Why Wyoming Was Terrible

Why Idaho/Montana Was Terrible

On Quitting the Trail

Have your own tale of woe from a Continental Divide Trail thru-hike? Leave a comment below and warn future CDT classes of the awfulness that awaits them on their thru-hikes.

I get a lot of people asking every year how to support the surveys and beyond sharing them with your close-knit bubble of weird hiker friends, the best way to support the survey is to contribute via Patreon. You'll get access to exclusive posts, discount codes, live streams, and super extra cool stickers so that everyone will know how cool you are. 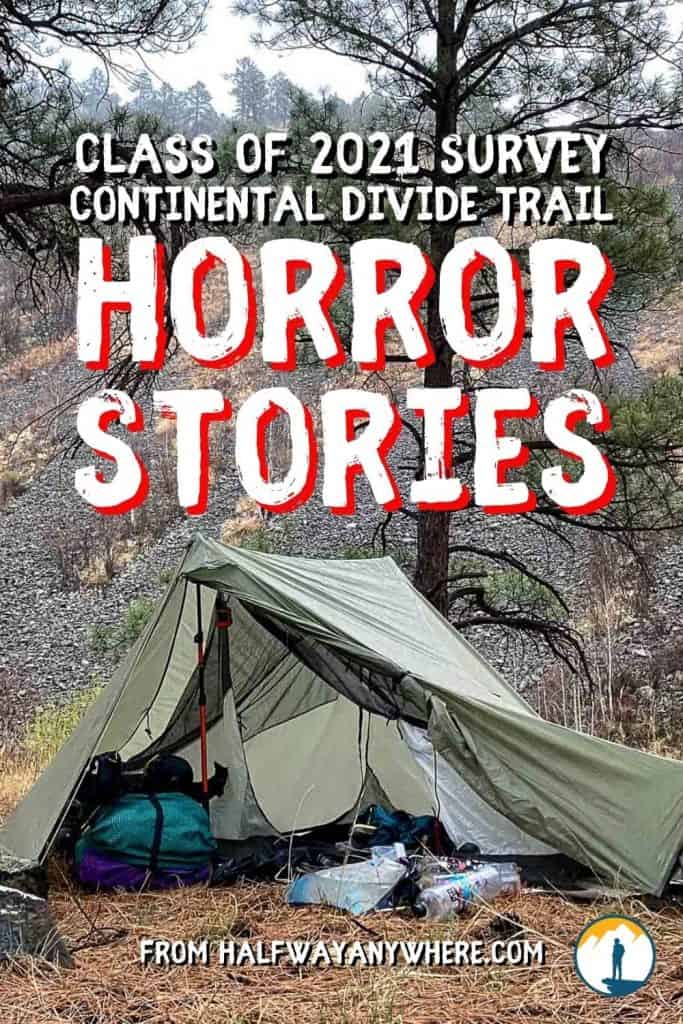 Fun times on the CDT in 2021 include, but are not limited to:

Crossing nine straight miles of blowdowns in Montana, sometimes so thick you couldn’t even see the trail and making it to camp only to find everyone else had taken a scenic shortcut which had zero blowdowns.

Taking a 30 mile road walk and getting heat stroke, sitting down by the side of the road with barely enough energy to move, but finally pushing the extra miles to get to camp only to find the trailhead had a no camping sign and having to night hike another 10 miles, ending up sleeping in a ditch and finally waking at 5am to hike another 12 miles to get to Yellowstone.

Pulling 58 miles into Rawlins only to arrive after midnight, the only place being open for food was the Kum & Go gas station and subsequently getting the worst food poisoning of my life – leading to passing out in the motel lobby and going to ER.

Pushing hard (after the Rawlins incident) to catch up with a group in Steamboat Springs, getting into town and expecting a zero only to have everyone leave the next day.

Climbing up James Peak as the skies truned black, getting pelted with heavy hail with lightning close by as we summited, becoming absolutely drenched while running down to lower ground and the guy I was with looking like he was on the brink of hypothermia with uncontrollable shivering. If the skies hadn’t cleared up, things could have gone bad.

Taking a “break” from trail to bag a sunrise summit of Mount Elbert, only to wildly overestimate the time needed (I was hiking with a friend who wasn’t trail fit), spending three hours on top in freezing temperatures and getting pneumonia – making breathing pretty hard for the rest of Colorado.

Being stalked by a mountain lion twice – once through the Gila after dark.

I had so much fun that I’m planning to do it all again, although perhaps with a few tweaks next time.

Back in 2004, the Winds (WY) kicked my butt. Torrential rains low that turned to snow up high, a partially wet bag (no sun), stolen trail signs, being too cold to stop hiking for food or navigation, making other dangerous choices. [It was also amazing!]

I encountered the worst mosquitoes of my entire life in the Winds. A lot of beauty but also a lot of suck out there.