This section, from the bottom of the Cartridge Pass Trail, follows a use trail up and over Cartridge Pass before dropping into the Lake Basin. From here, the trail continues north (crossing the Sierra High Route) and takes a line northwest to climb up and over Dumbbell Pass. Dropping down the other side of Dumbbell Pass, the route heads around Dumbbell Lakes and then northwest to Observation Peak Pass.

The route then drops west from Observation Peak Pass before skirting the shore of an unnamed lake and turning north to cross Adventurer Col. From the col, it drops north down to Palisade Creek. Across the creek, on the north side, hikers find the Pacific Crest Trail/John Muir Trail which they’ll follow west to Le Conte Canyon and the Middle Fork Kings River.

At the South Fork Kings River, we find a use trail (and a spattering of cairns) that we follow up the steep hillside. The trail is relatively easy to follow, but there are a few times we get a bit turned around; we always manage to find our way back to the use trail.

The trail flattens out (and disappears?) at around 10,840 ft / 3,304 m. Across the valley, we can see Bench Lake – near where we dropped down to the South Fork after leaving Arrow Pass. Apparently, there’s still a use trail somewhere in here, but it’s straightforward walking around the northeast shore of the unnamed lake. Heading north from the lake, we manage to pick back up the use trail and we follow it up to Cartridge Pass.

As far as passes we’ve crossed on the route thus far, this one is fairly straightforward (especially once you make it up to the lake).

Looking north into the Lake Basin to the north, we can see Frozen Lake Pass to the northeast (part of the Sierra High Route) while Arrow Pass (the final pass of Section 3) remains just out of sight to the south. Dumbbell Pass, the route’s next destination, is not visible from Cartridge Pass as it’s a little too far west.

The trail continues down the north side of Cartridge Pass despite it not necessarily appearing to do so from our vantage point at the top. You’re basically shooting for the northeast shore of the series of lakes below.

If you’re short on time or need to exit via Road’s End for some reason, you could hike the Sierra High Route south from here over Red Pass, White Pass, and Grey Pass to meet back up with the KCHBR at State Lakes (you then have to cross Goat Crest Saddle and Grouse Lake Pass before heading down to Road’s End).

Apparently, this is part of (near?) the old John Muir Trail. I need to look up to see what the old JMT is and then go hike it.

We drop down from the pass to easy terrain below as we trace the northeast shores of a series of lakes. The trail slowly fades but the travel is pleasant. Our route takes us west toward the still-hidden Dumbbell Pass.

The Lake Basin is fairly wide open except for a scattering of small lakes and dotting of trees spread throughout. From Cartridge Pass, you don’t get a view of your next destination, Dumbbell Pass, until you’re nearly on top of it.

We take a line northwest toward the pass from around 10,800 ft / 3,292 m. The peak directly east from Dumbbell Pass is the unnamed Peak 12838. If you drop too far down/west before climbing up to Dumbbell Pass, it still looks like it should be a relatively easy hike up.

Below the pass on the southern side, there’s a small tarn. Nothing too exciting, but it’ll let you know you’re going the right way. The final approach to the pass is mostly free of talus and involves a rather gentle grassy/dirt ramp up to the elongated Dumbbell Pass (you’ll see what I mean).

Looking north from Dumbbell Pass, we can see Observation Peak off to the left – it’s got a wide, almost plateau-looking, top – with the Palisades set further back in the distance (on the other side of the PCT/JMT). If you follow the ridge down left from Observation Peak, that’s Observation Peak Pass. It may look impossibly steep from here, but it’s not as bad as it looks.

Dropping down the north side, we encounter talus and a lot of “I can’t see down so I’m not sure which way to go” type terrain. We find that the easiest way down (we think) is via a snow-filled cute on the western side of the talus field north of the pass.

Continuing northwest from the western shore of Dumbbell Lakes, we cross Dumbbell Basin and drop to two smaller lakes at around 10,850 ft / 3,307 m. We pass these on the west and then approach a larger, longer lake just north of and above us.

It’s lots of medium to large talus up to the pass. That said, it goes quickly and it’s mostly stable to the top. I stick next to the wall on the west side heading up and it works out well.

From the top, we drop west through scree, talus, and snow to a small body of water at around 10,950 ft / 3,338 m. We try dropping west from here but then get cliffed out and have to cut south before heading west again. We probably should have stayed further south from here and remained in the chute we descend from the top.

We make some insecure moves down some boulders to reach the bottom. From here, we can see that (it looks like) the chute we were initially following down is a far nicer route to reach here. We now work our way down to the boulder-filled north shore of Lake 10,571.

We have an interesting time getting around the lake along the north shore. We stick close to the lake and end up having to make some interesting moves up, down, and through (literally crawling through boulders) the boulders.

I don’t know if staying up higher (further from the lake) would have been more straightforward or if perhaps we should have headed around the southern side of the lake. That said, from where we’re standing, the south shore does not look like a very attractive option (and it looks much longer).

We found some beautiful camping at the western side of the lake and in the morning we set off a short distance toward Adventurer Col.

From the west side of the lake, we contour at just below 10,600 ft / 3,231 m to a tarn immediately south of Adventurer Col. For the record, I cannot find this location labeled as Adventurer Col on any of my maps, but that’s what we’ll call it, I guess. The walk up the south side of Adventurer Col is trivial. The hike down the other side is a different story.

Looking north from Adventurer Col, you’re met with a steep descent into a large talus bowl. Our way down feels secure and once we reach the bottom of the bowl, we boulder hop until reaching the next dropoff directly ahead of us. When we are navigating our way down it appears that there’s been a recent slide and the talus becomes much less secure until the terrain levels out a bit below 9,800 ft / 2,987 m.

We make our way down, staying west of the creek leading down to Palisade Creek. There’s a second creek that comes down from the west to meet the one we’re following at just above 9,400 ft / 2,865 m. We cross this creek just before the confluence, remaining west of the first.

The way down isn’t as terrible as we imagine and we don’t have to endure any major bushwhacking to reach Palisade Creek. North of Palisade Creek (which according to my map has an easier crossing further west if you have trouble crossing where you meet it), we find the PCT/JMT. We follow it west to Le Conte Canyon and the Middle Fork Kings River and the end of Section 4.

The most reasonable place to start a loop of Section 4 of the Kings Canyon High Basin Route would either be South Lake or the Taboose Pass Trailhead on the East Side (both accessible via Highway 395).

STARTING AT TABOOSE PASS TRAIL: The most direct access to the southern terminus of Section 4 is via Taboose Pass. Hike over Taboose Pass to the junction with the Pacific Crest Trail/John Muir Trail. Follow the PCT/JMT north to the South Fork Kings River and turn west, following a use trail to the Cartridge Pass Trail. (map)

STARTING AT SOUTH LAKE: The closest (on trail) access to the northern end of Section 4 is via Bishop Pass from South Lake. The well-defined trail from South Lake leads over Bishop Pass and through Dusy Basin before descending to the Pacific Crest Trail/John Muir Trail in Le Conte Canyon. When you reach the PCT/JMT, head south until reaching the northern terminus at the Middle Fork Kings River. (map)

The longest climb of the section is up to Cartridge Pass, but most of that (presumably all of it) is via a use trail which makes things easier. The longest descent is after Adventurer Col down to Palisade Creek. It’s a fairly accessible section of the Sierra and in addition to having a few miles on the Pacific Crest Trail/John Muir Trail, it also crosses the Sierra High Route in the Lake Basin.

The majority of this section is above tree line, but there is some shelter to be found. in the Lake Basin (between Cartridge Pass and Dumbbell Pass) and Dumbbell Basin (between Dumbbell Pass and Observation Peak Pass). The most challenging part of this section, if I had to choose one, might be from Observation Peak Pass and to the western shore of Lake 10,571. However, I am fairly certain we took a more difficult route than necessary down from the pass. 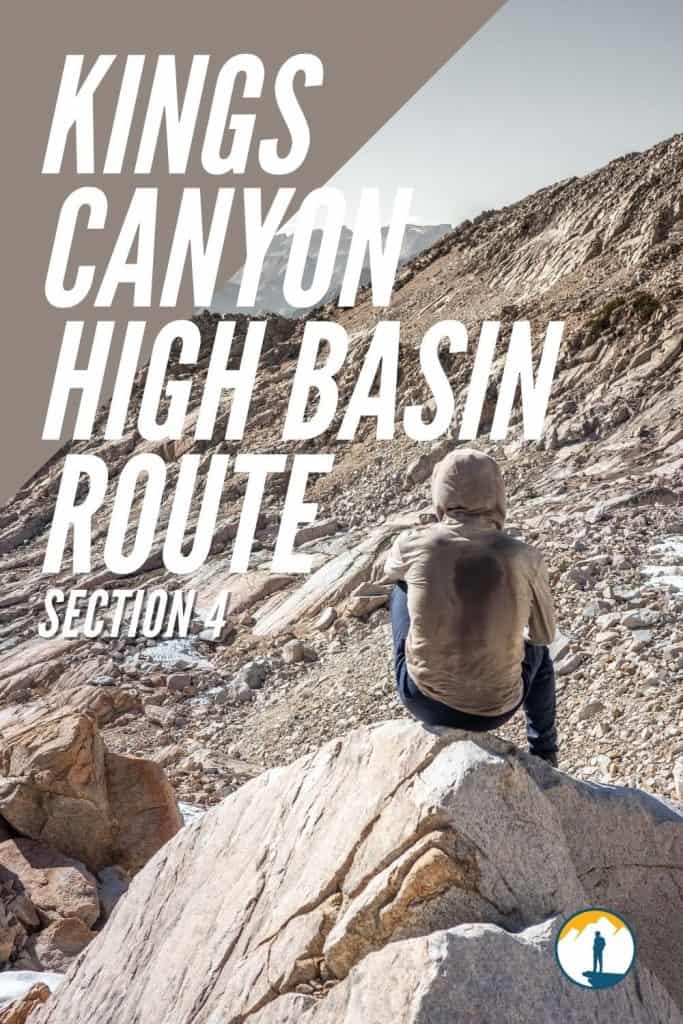