Following the Colby Pass Trail up from Cloud Canyon, the route climbs around the north/east side of the Whaleback before turning off the trail just north of Colby Lake. The route climbs past Talus Lake to Talus Pass before contouring (or dropping) to Table Creek and climbing to Thunder Ridge Pass. Dropping from the pass, hikers wrap around the north side of a series of lakes before climbing the valley occupied by Cunningham Creek. South of South Guard Lake, the route turns east over Longley Pass before dropping to Lake Reflection and following East Creek past East Lake down to Bubbs Creek. Here, hikers pick up the Bubbs Creek Trail at Junction Meadow.

After around 2.5 mi / 4 km on the trail, we hit the outlet of Colby Lake and left the Colby Pass Trail. The route heads north from here and contours around the western side of a cliff band. The hiking here wasn't too difficult and before long we had escaped the trees and could see up the valley up toward Talus Pass. Behind us, we can see back to Copper Mine Pass.

We crossed to the north side of the creek (Talus Creek?) at around 11,000 ft / 3,353 m and then followed it up toward the (still hidden) Talus Lake. The terrain here is fairly open and we ended up taking two different routes up to the knoll just south of and overlooking Talus Lake (too far above it to warrant any swimming). We dropped into the depression just south of Talus Pass and then hiked up to it.

Talus Pass can be identified by the tarn immediately below it to the north, but just northeast of this tarn is another area that could also be mistaken for the pass (maybe it is technically part of the pass?) We gained this secondary area and decided to contour around the cliff band in front of us instead of dropping to the trees below (from where you could presumably then follow Table Creek up).

We finish up the contour from Talus Pass, staying just below 11,400 ft / 3,475 m, and soon meet Table Creek at the same elevation. Following the creek up is pleasant and before long we reach a small saddle-like feature at just over 11,900 ft / 3,627 m between two humps.

In front of us is Thunder Ridge Pass, but to climb up to it, we first need to drop around 50 ft / 15 m into a depression just below the pass. It might not seem like a lot, but it feels like a lot. Basically just talus everywhere.

From the top of the pass, there are decent views in either direction, but your focus might be drawn to the talus field you now must descend. There was a small amount of lingering snow toward the top which was too steep to safely glissade down, but we did find some patches a bit further down that allowed for some small glissades.

It wasn't terribly bad making it down the north side, and we encountered few problems following the northern shores of the three lakes below (although we did try to drop to the first lake too soon – I would stay at around 11,400 ft / 3,475 m until you're just north of the first lake before dropping down).

After passing north of the third lake north of Thunder Ridge Pass, we contour around at 11,040 ft / 3,365 to Cunningham Creek. Climbing up the west side of the creek, we see a small hump obscuring the view of what we think is Longley Pass – located between South Guard and the unnamed (I think?) peak just south of it.

We follow the creek up before crossing it around 11,500 ft / 3.505 m and then traversing up the aforementioned talus-filled hump (which was actually a slope that eventually levels off before approaching the pass). I don't see any reason we couldn't have made a more direct approach to this slope instead of crossing Cunningham Creek just below South Goddard Lake. If I were to hike this section again, I would shoot directly up this slope from Cunningham Creek at around 11,400 ft / 3,475 m.

At around 12,000 ft / 3,658 m the terrain levels out and gives way to a gently sloping sandy plain leading up to Longley Pass – the high point of the route at 12,467 ft / 3,800 m. The eastern side of this pass can hold snow until late in the season and there's a chance you won't be able to securely make it over and down the other side (depending on when you get here).

We encounter a large snowfield and cornice on the east side of the pass (our first significant snow of the route).

From here to around 11,820 ft / 3,603 m it was scree skiing all the way down (and I think I may have spotted a bit of a use/game trail somewhere in here). Passing east of the first tarn below, we stayed high above the lake below. I was told that we should have followed the outlet of the larger lake (the one we passed west/above of) down toward Lake Reflection. We don't do this (because we drift too far north) and instead contour north at 11,400 ft / 3,475 m and follow a more northerly gully down to the lake below.

Once we make it to our mystery creeks confluence with East Creek, we head around the western side of Lake Reflection. We stay around 10,200 ft / 3,109 m – well above the lake – before dropping down closer to the shore as we approach the northern end. I'm not sure this was the best way to navigate this stretch, but it worked.

At the north end, we find a mess of logs that looks like it might be crossable, but we don't manage to find a steady way across without getting our feet wet. Instead, we head a little further north, past the end of what could still be considered part of the lake, and find a way across to the other side – where there's a trail.

The trail is a bit tricky to follow at first (maybe because it's getting dark), but the further north we get heading along the eastern side of East Creek, the more clear the trail becomes. Before long, we're on a well-defined trail that takes us past East Lake and that leads us down to Bubbs Creek.

Depending on the time of year (and the year), this creek crossing can be treacherous. At the very least, you can expect to get your feet wet.

On the other side is Junction Meadow and the well-defined, well-trodden Bubbs Creek Trail. Head left to cut the route short and make your way down to Road's End (the “northern” terminus of the Kings Canyon High Basin Route), or head right and up the trail to the intersection with the Pacific Crest Trail/John Muir Trail where the KCHBR continues.

The most reasonable place to start a loop of Section 2 of the Kings Canyon High Basin Route would be Road's End in Kings Canyon National Park.

CLOCKWISE: If traveling clockwise, follow the Bubbs Creek Trail up to Junction Meadow to the northern terminus of this section. You'll then follow Section 2 southbound until reaching Cloud Canyon. Here, continue following the Colby Pass Trail north to Scaffold Meadows before heading north at a junction to Moraine Meadow and over Avalanche Pass back to Road's End.

COUNTERCLOCKWISE: If traveling counterclockwise (the direction described here), you'll still start at Road's End and follow the Bubbs Creek Trail east. After passing east of Avalanche Canyon, you'll turn south and follow the trail up and over Avalanche Pass. After passing Moraine Meadow, you'll reach Scaffold Meadows and Cloud Canyon. From here, you can pick up the Colby Pass Trail and follow the Roaring River along the east side of the Whaleback (at which point you're on Section 2).

NOTE: I have not hiked the section of trail between the Bubbs Creek Trail, over Avalanche Pass, and down to Cloud Canyon. From what I can tell, this route follows established trails, but I cannot speak to their level of maintenance. I encourage you to check with the park's backcountry office (where you got your permit) for more information regarding the status of these trails before committing to this loop.

Section 2 of the Kings Canyon High Basin Route is alright. As far as scenery goes, I think I prefer Section 1. As far as difficulty goes, I think Section 2 might be tougher. The route finding can be a bit more complicated and the north/east sides of the passes are a bit steeper.

The descent down the east side of Longley Pass to Lake Reflection was the most challenging part of this section (especially immediately below the east side of Longley Pass)and after climbing above the tree line toward Talus Pass, you're above the tree line for nearly the entirety of this section (until reaching Lake Reflection). 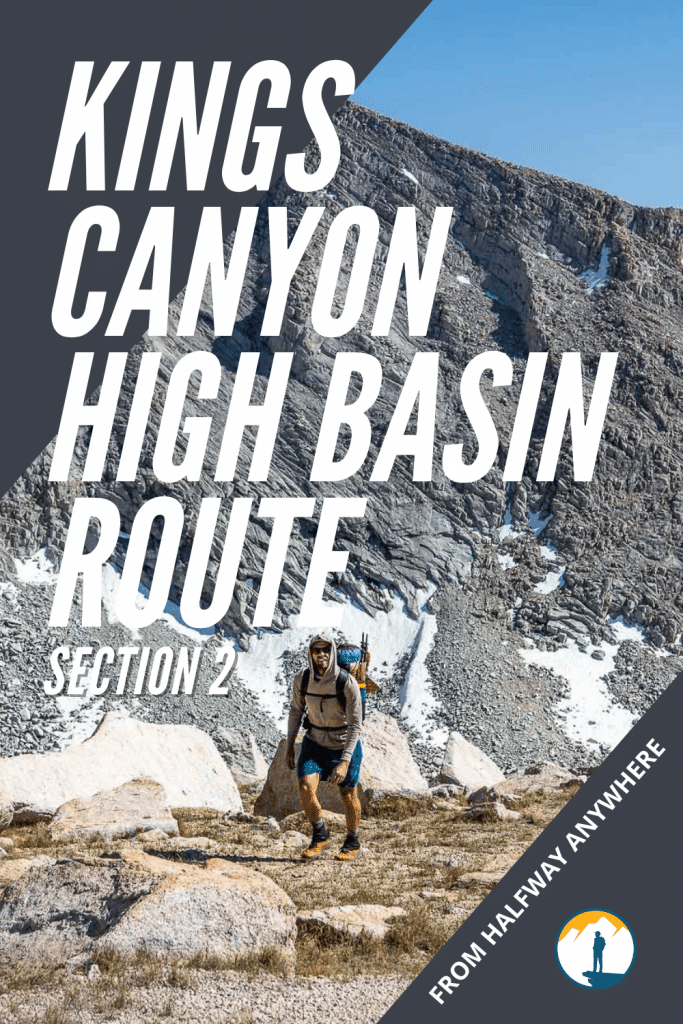