I’ve spent a lot of time in California’s Sierra Nevada Mountains – hiking through them twice on the Pacific Crest Trail (in both snow-free and snow-covered conditions) and making countless other (shorter) trips in via both the eastern and western slopes. The 400 mi / 640 km long range is home to Mount Whitney (the highest point in the Continental United States), Lake Tahoe (the largest alpine lake in North America), three National Parks (Kings Canyon, Sequoia, and Yosemite), and is spotted with groves of giant sequoias (the largest trees on Earth).

Stated simply, the Sierra Nevada is an extraordinary example of our planet’s geological capabilities.

The Sierra (not/never the Sierras) boasts some of the country’s most spectacular trails including, but not limited to, the Pacific Crest Trail (PCT), the John Muir Trail (JMT), the Tahoe Rim Trail (TRT), and the High Sierra Trail (HST), but the Sierra is large enough a place that plenty of the landscape is free from human cultivation.

The Sierra High Route (not to be confused with the High Sierra Trail – a 71 mi / 114 km trail from Sequoia National Park to Whitney Portal) was conceived by Steve Roper and is described in his book Sierra High Route: Traversing Timberline Country. The name intentionally lacks the word “trail” as the majority of it calls for cross-country travel (i.e. off-trail hiking). Much of the route is above 9,000 ft / 2,743 m and although it overlaps some with the PCT/JMT – including taking the trail over Mather Pass and Muir Pass – many of the passes are far from the normal Sierra trekking routes.

I’ve been wanting to hike this route for a while now and (hopefully) this is about to be the year I check it off the ever-growing list of “imaginary and/or actual lines across the Earth I need to walk.”

After thoroughly examining Steve Roper’s book Sierra High Route: Traversing Timberline Country and all the notes/GPX files I can find online, I am interested to see what all these Class II, III, and IV scrambles look like in person. Some of the passes – like Frozen Lake Pass and Snow Tongue Pass – are notoriously “difficult” and even have alternate routes to avoid them. Me, sitting on a couch in an air-conditioned room after having enjoyed a filling breakfast, says “hell yes, I’m going over those passes – no way am I going to take those alternates”.

But things can change quickly out on the trail.

Roper’s Sierra High Route begins at Road’s End in Kings Canyon National Park and ends in Mono Village at Twin Lakes just southwest of Bridgeport along Highway 395. However, Alan Dixon (aka Adventure Alan) has mapped and described what he’s dubbed the Southern Sierra High Route (SoSHR) which I am hoping to connect to the SHR into a SoSHR+SHR extended trip (Full SHR?).

The SoSHR begins at Horseshoe Meadows – west of Lone Pine – via the Cottonwood Lakes Trailhead and climbs into the Sierra via New Army Pass before making north over the summit of Mount Whitney and continuing north – parallel to (and sometimes on) the John Muir Trail – before exiting the mountains via Bishop Pass and ending at South Lake (west of Bishop).

The plan is to begin at Horseshoe Meadows and hike north on the Southern Sierra High Route until reaching Bubbs Creek Trail. Instead of continuing north on the Pacific Crest Trail/John Muir Trail past Kearsarge Pass and over Glen Pass, we’ll take Bubbs Creek Trail west until reaching Road’s End in Kings Canyon National Park. From there, we’ll continue north following the Sierra High Route for the remainder of the journey.

In total, I expect the route to be around 246.6 mi / 396.87 km with around 52,463 ft / 15,991 m of elevation gain and to take between 16 and 20 days. Our resupply points will be an out-and-back over Bishop Pass (the northern terminus of the SoSHR) and a second over Mammoth Pass (the shuttle from Red’s Meadow isn’t running this year) – breaking the trip into three sections. The first stretch is (or at least looks to be) the longest. Since I don’t want to have to carry my BV500 the entire time, I will likely be rationing from the start. Not fun, but (maybe?) worth it.

So long as I don’t die, it should be pretty fun. 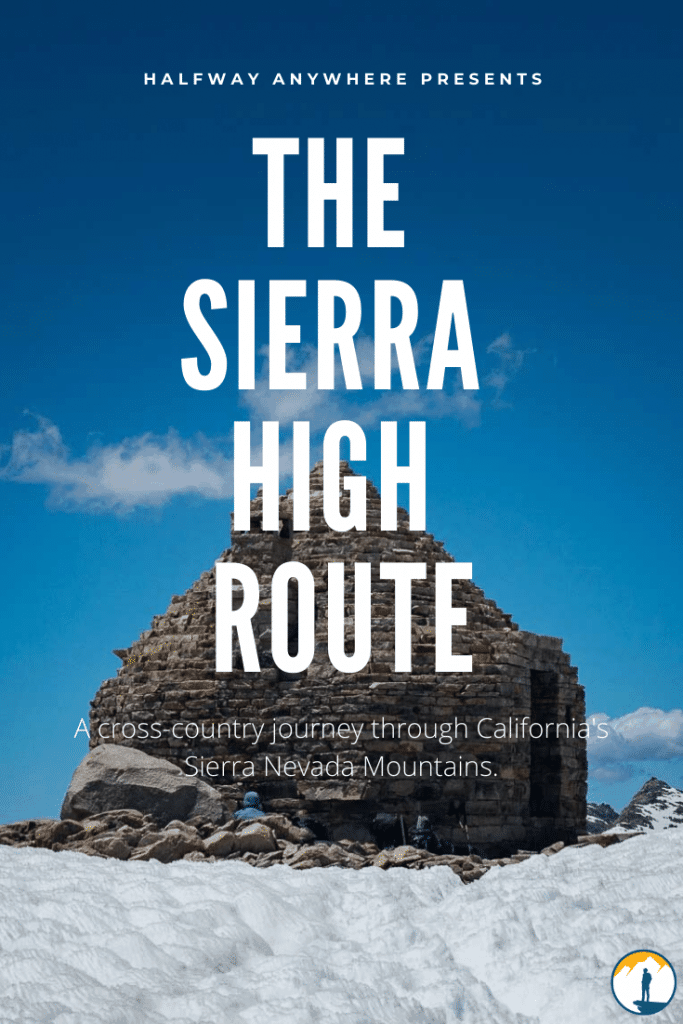