From the Middle Fork, at the confluence with Goddard Creek, the route follows a trail southwest around Windy Peak to Simpson Meadow. After crossing Horseshoe Creek, the trail climbs the well-defined Bitch Trail (that’s what it says on my map) up to around 9,950 ft / 3,033 m before heading east to State Lakes.

Leaving State Lakes, the route continues to follow a trail before turning south and climbing past Glacier Lakes over Goat Crest Saddle. From here, it’s a short trip south to Grouse Lake Pass. Leaving Grouse Lake Pass, the route passes Grouse Lake and then picks up a use trail that leads to the Copper Creek Trail which descends to Road’s End.

We follow the trail southwest along the Middle Fork around Windy Peak to Simpson Meadow. There’s a trail junction here and we take the fork toward Granite Pass (there’s even a sign!)

The trail remains well-defined as we begin a nearly 5,000 ft / 1,524 m climb up to State Lakes (one lake is down the hill from the other which is why it’s State Lakes with an ‘s’ and not State Lake). There isn’t any water (that we saw) on the climb, so come prepared. Simpson Meadow is the lowest point of the route except for Road’s End; it can get hot.

The climb is long but straightforward. Lots of switchbacks and the occasional deer. Nothing to get too excited about (except for cooler temperatures at the top).

At around 9,950 ft / 3,033 m, a faint but somewhat cairned trail leads east to State Lakes. Alternatively, you could continue south on the trail south through Dougherty Meadow and then turn east toward Glacier Valley/State Lakes after descending/ascending.

We don’t want to do any unnecessary climbing, so we stick to the State Lakes route – we also need water (and a place to camp).

I think there’s a way up to Glacier Lakes (the lakes above us that we cannot yet see) that follows the outlet up, but we take the same route here I did when hiking the Sierra High Route and climb up the west side of the valley before contouring south to meet the outlet at the north end of the more northerly Glacier Lake.

We go around the east side of the lower lake and then, keeping east of the outlet, we continue south to the upper lake. From the outlet of the upper lake, you can see Goat Crest Saddle and where you’ll be climbing up – it looks steep but it isn’t bad at all.

Rounding the upper lake on its east side, we follow the shore southwest and begin climbing to Goat Crest Saddle. The climb is fairly straightforward and isn’t particularly noteworthy compared to everything else we’ve done up until this point. It’s a mix of grassy ramps, slabs, and a bit of talus with some snow patches sprinkled around.

At the top, we find a tarn occupying most of the broad saddle. From the north side of the saddle, we can spy our next destination, Grouse Lake Pass.

We follow the path of least resistance down grassy ramps to a cluster of tarns located below us. Crossing slabs, we make a line for Grouse Lake Pass ahead of us. It’s only maybe 100 ft / 30 m of climbing between our low point south of Goat Crest Saddle and the top of Grouse Lake Pass.

Not the most dramatic way to end the trip, but the views south from the pass are sweeping.

From the pass, we drop south toward Grouse Lake. Be careful to not hit the lake too far north as you’ll get cliffed out and have to hike back up. Instead, keep a bit above the lake until you’re past the western shore.

Once clear of the lake, you’ll find some great campsites on the south side. Continuing south, we find a use trail that comes and goes as we trace the western shore of Copper Creek, continuing to contour and descend.

At around 10,280 ft / 3,133 m we meet the well-defined Copper Creek Trail. This trail drops over 5,000 ft / 1,524 m to the Kings Canyon High Basin Route’s northern terminus, Road’s End in Kings Canyon National Park. Around halfway down, you’ll pass an established camping area (complete with a bear box) at Lower Tent Meadow. If you’re planning on camping on the way down, this is the final legal place to do so.

Road’s End doesn’t have much except for a backcountry permit office, bear boxes, pit toilets, and lots of parking. Cedar Grove is 6 mi / 9.7 km via the road. Here, you can find a lodge with a small market and grill along with a visitor center and campgrounds.

The most reasonable place to start a loop of Section 6 of the Kings Canyon High Basin Route is via Road’s End in Kings Canyon National Park. If you really wanted to hike in from the East Side, the Taboose Pass Trailhead would be your best bet (accessible via Highway 395).

STARTING AT ROADS END: The place that makes the most sense to loop from is Road’s End. However, if you want to hike on a trail for the entirety of the loop (excluding Section 6), then you have a long trek ahead of you (longer, in fact than Section 6 itself). Leave Road’s End via the Bubbs Creek but then turn north and follow the trail (part of the Rae Lakes Loop) up to Woods Creek. Hike the trail following Woods Creek east until reaching the Pacific Crest Trail/John Muir Trail. Follow the PCT/JMT north over Pinchot Pass, over Mather Pass, and down to the Middle Fork Kings River. Follow the trail down the Middle Fork down to the start of Section 6.

STARTING ON THE EAST SIDE: If you prefer to access this section from the Eastern Sierra, you have a long hike in. You can hike over Taboose Pass and then north following the Pacific Crest Trail/John Muir Trail over Mather Pass before reaching (and following) the Middle Fork King River down to the start of Section 6. Alternatively, you can turn south when you reach the Pacific Crest Trail/John Muir Trail and follow it over Pinchot Pass to Woods Creek before following Woods Creek out to the Bubbs Creek Trail and then to Road’s End.

Section 6 of the Kings Canyon High Basin Route is short and relatively unremarkable when compared to the rest of the route.

Nearly 19 of the 27 miles in this section (30.5 of 43.5 km) follow well-defined trails – the only exception being between State Lakes and Grouse Lake. The longest climb in this section is from Simpson Meadow to State Lakes on what’s apparently called the Bitch Trail.

Everything north of the final approach and climb up to Goat Crest Saddle and everything south of Grouse Lake is below tree line. There isn’t anything particularly difficult about this section unless you’re hiking starting at Road’s End – the hike up to Grouse Lake Pass is a beast and I would recommend starting early in the morning, if possible. 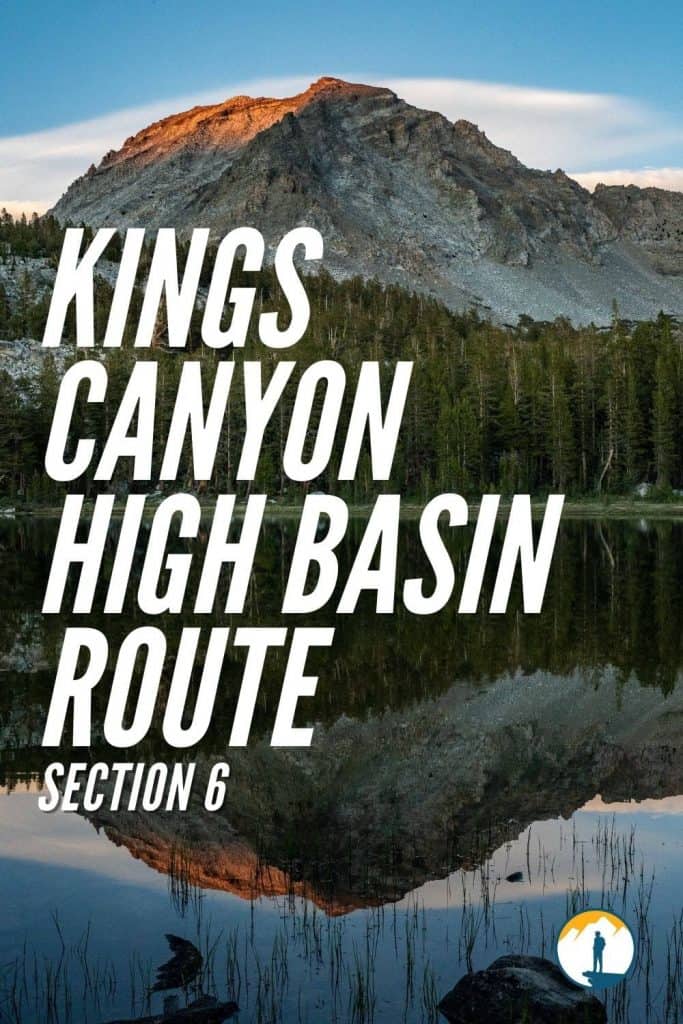