How to Connect the SoSHR and the SHR

The Sierra High Route and the Southern Sierra High Route are two incredible routes through California's Sierra Nevada that are each remarkable on their own. However, it is possible to connect these two routes into a single and most epic journey through the Sierra. Here's how to do it.

This post goes into a lot of detail about connecting the two routes.

If you want the one-sentence summary, here it is: connect the Southern Sierra High Route and the Sierra High Route by planning to hike the entirety of the SHR and then taking the Bubb's Creek Trail between Road's End (the southern terminus of the SHR) and where the SoSHR intersects the Bubb's Creek Trail south of Glen Pass; the only parts of the SoSHR you'll miss by doing this are on-trail miles following the PCT/JMT and Bishop Pass Trail.

The Sierra High Route covers approximately 195 miles / 314 km with its southern terminus at Road's End in Kings Canyon National Park (via the Copper Creek trailhead) and its northern terminus at Mono Village at Twin Lakes (just outside of Bridgeport). This route is typically hiked south to north (as this is how it's described in Steve Roper's book, Sierra High Route: Traversing Timberline Country), but there's no reason you couldn't reverse the route (the book offers notes on doing just this for each section).

The Southern Sierra High Route covers approximately 100 mi / 160 km with its southern terminus at Horseshoe Meadow (west of Lone Pine) via the Cottonwood Lakes/New Army Pass trailhead and its northern terminus located at South Lake via the Bishop Pass trail. This route is typically hiked north to south, but again, there's no reason that you can't reverse the route (I hiked it south to north).

Luckily, connecting these two routes is relatively simple since they not only overlap a bit, but they also operate (mostly) at different latitudes (precisely why the Southern Sierra High Route is named as such – it's essentially meant to be an extension of the Sierra High Route).

The only caveat here is that you will forgo hiking the SoSHR section between the junction of the Pacific Crest Trail (PCT)/John Muir Trail (JMT) and the Bubb's Creek Trail and the junction of the PCT/JMT and the SHR (just south of Mather Pass). However, chances are that if you're reading this and are interested in hiking both the SHR and the SoSHR, then you're not going to be upset about missing ~28 mi / 45 km of on-trail hiking over Glen Pass and Pinchot Pass.

The overlapping section of the Southern Sierra High Route and the Sierra High Route runs from immediately south of Mather Pass and continues approximately 13 mi / 21 km north to where the Bishop Pass trail intersects the two routes in Dusy Basin.

At the trailhead, you will find plenty of parking, pit toilets, trash cans, bear boxes, and potable water (typically turned off sometime in October).

There are three campgrounds at Horseshoe Meadow:

The road up to Horseshoe Meadow is generally closed from November to May because of snow.

If you're connecting the Southern Sierra High Route and the Sierra High Route, the northern terminus of your hike will be the Horse Creek Falls trailhead at Annett's Mono Village (map) located at Twin Lakes just outside of Bridgeport on Highway 395.

It's about 14 mi / 22.5 km from Bridgeport to Mono Village via Twin Lakes Road. Mono Village is a haven for old, overweight, white Republicans with expensive RVs and nothing else to do with their children's inheritance. And I'm sure other people wanting to get outdoors as well. Mono Village has a small convenience store, a campground, flushing toilets, cabins for rent, coin-operated showers, laundry, and (apparently) Wi-Fi.

The cost to park a car at Mono Village is $15 for up to seven days (and I would assume an additional $15 per seven day period following the first). Camping at Mono Village costs $28 per day (plus tax) for 2 people with a charge of $3 per day per additional person. They accept cash and credit cards.

The total driving distance between Horseshoe Meadow and Mono Village is 183 mi / 295 km.

If you're heading southbound, split off from the PCT/JMT after crossing Mather Pass and follow the SHR over Frozen Lake Pass (instead of following the SoSHR south over Pinchot Pass). Then, once you reach the southern terminus of the SHR at Road's End, follow the Bubb's Creek Trail east until intersecting the SoSHR/PCT/JMT. When you reach this junction, simply continue south on the SoSHR.

Alternatively, you can follow the SoSHR/PCT/JMT between Mather Pass and the Bubb's Creek junction, but then you'll be missing the southernmost section of the SHR – a much more scenic and exciting section of the Sierra than following the SoSHR along the PCT/JMT.

Road's End is indicated on the map below (the Bubb's Creek Trail is accessible via the Rae Lakes Loop Trailhead).

It's possible you'll miss the northernmost section of the Southern Sierra High Route from Dusy Basin over Bishop Pass to South Lake (the northern terminus of the SoSHR) if you plan on connecting the two routes.

This section of the SoSHR is on-trail and is more a means of getting into/out of the mountains than it is a not-to-be-missed area. I promise that if you're hiking the rest of the Sierra High Route and the SoSHR, you will not be disappointed for having missed the section of trail between Dusy Basin and South Lake.

However, if you want to make this section part of your trip, you could resupply via Bishop Pass/South Lake. This way, you will not be missing this section of the SoSHR. You can leave a car parked at South Lake (map), hitchhike into Bishop, or take the Bishop Creek Shuttle for $5 (stops at South Lake twice daily at 8:45 am and 4:45 pm).

By connecting the two routes via the Bubb's Creek Trail, you will also be missing the section of the SoSHR from just south of Mather Pass to the intersection of the PCT/JMT and the Bubb's Creek Trail. However, this ~28 mi / 45 km section consists entirely of on-trail hiking over Glen Pass and Pinchot Pass. Within this section, there's an alternate you can take over Mount Baxter, which could be considered the one worthwhile thing you will miss on the SoSHR.

That said, the section of the SHR you will be hiking instead (which is nearly entirely off-trail) more than makes up for a trip over Mount Baxter and lots of on-trail PCT/JMT hiking. 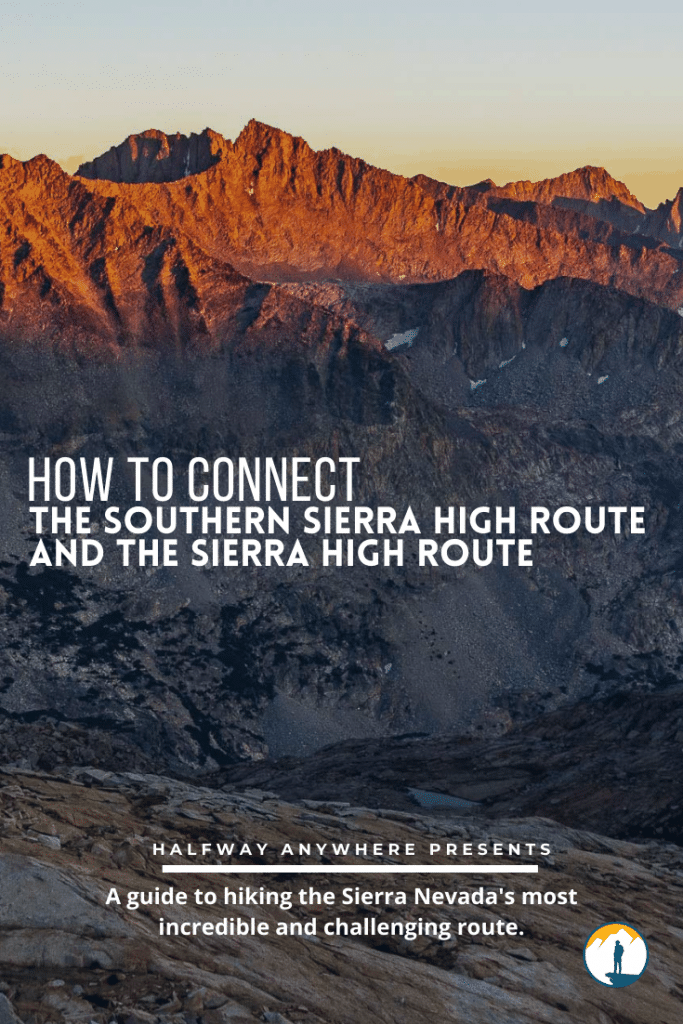 How much of the SHR and SoSHR overlaps the PCT/JMT? When I did the PCT I noticed that some signage I came across implied that I was on the SHR as I exited and entered again the PCT via the trail to/from Roads End

I don’t know that there’s any signage you would encounter indicating the SoSHR or SHR, but the SoSHR overlaps the PCT/JMT from north of Forester Pass to the north end of Palisade Lakes.